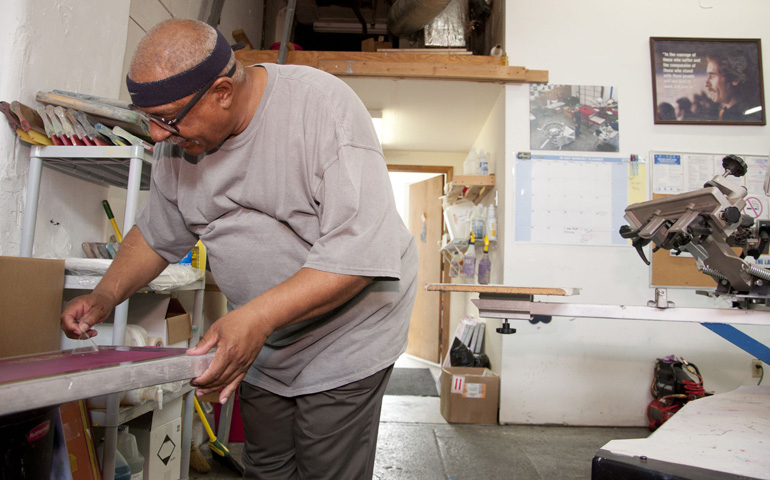 Dismas House resident and Triple Thread employee Dwain Adkins cleans a silk screen May 1 to prepare for a custom print job at the shop where he works in Nashville, Tenn. (CNS/Tennessee Register/Theresa Laurence)

Last fall, Dwain Adkins was about to be released from prison after serving a six-year sentence for aggravated assault. He had no family to return to on the outside and had not been accepted into a halfway house.

"My biggest fear was being homeless," he said. "It was hard for me to fathom that. It tore me up."

Finally, one week before his release, Adkins got word from Dismas House in Nashville that he would have a place to stay.

"Dismas gives guys like me an opportunity, and for that I'm grateful," he told the Tennessee Register, newspaper of the Nashville diocese.

Not only did Adkins find a safe place to land after prison, he also found immediate employment through Dismas' social enterprise -- a custom screen-printing business called Triple Thread Apparel that helps ex-offenders like Adkins reintegrate back into society through employment and job training.

Today, Adkins spends his days in the Triple Thread workshop, unpacking boxes of shirts, prepping and cleaning screens for printing, and ensuring orders are properly completed and ready for shipping. He does all this under the watchful eye of the founder of Dismas House -- the late Dominican Fr. Jack Hickey, who smiles down on all who enter the workshop from a poster on the wall.

A quote from Hickey reads: "In the courage of those who suffer and the compassion of those who stand with them, people will see God at work and join in." Those words still guide Dismas and Triple Thread today.

Hickey, a chaplain at Vanderbilt University in the 1970s, was inspired to start Dismas House to minister to former prisoners; Triple Thread was founded to take that ministry a step further.

The idea to start a custom screen-print shop grew out of conversations between university students and Dismas House residents during weekly dinners. Time and again, students would hear residents expressing their interest in starting their own business instead of facing constant rejections from employers because of their felony records. "Unfortunately, it's a huge stigma," said Dan Surface, executive director of Dismas.

While Dismas residents are often enthusiastic about working, they lack the financial resources, contacts and business experience necessary to enter the entrepreneurial world. Student volunteers recognized this conundrum and decided to step in by helping them start Triple Thread.

Using Kickstarter funds, grant money and equipment they purchased off Craigslist, Triple Thread was launched in September 2010 and has been growing ever since. "Slowly but surely, we're getting to profitability," Surface said.

At first, local colleges accounted for most of Triple Thread's business; now, nonprofit organizations are the biggest clients. "We want to grow the business, expand and move to a larger space," Surface said. He said he is optimistic the busy summer camp season will result in an uptick in business.

With only three employees, Triple Thread cannot provide employment for all former prisoners who live at Dismas. Surface constantly reaches out to companies and Dismas board members open to hiring someone with a felony record. For ex-offenders who have spent years in prison, the idea of personal responsibility on the outside "can be a shock to them," Surface said. "Some do well; some can't handle it."

Triple Thread is located not far from Dismas House, where five ex-offenders and one student volunteer currently live.

Dismas has the capacity for 12 ex-offenders, and Surface said they are working to fill the vacancies. Once men are released from prison and come to Dismas, they generally stay for about six months before getting on their feet and securing their own housing.

"A lot of times, the only option (for newly released prisoners) is the street, where they're more likely to commit a crime again and go back in," Surface said.

The national recidivism rate for ex-offenders is about 60 percent, Surface said, while for former Dismas residents, it's significantly lower. "We're a good investment," he said.

If prisoners have served their entire sentence, like Adkins did, they are released with little more than the clothes on their back -- no housing or job leads, no parole officer or social worker to follow up with them.

"Halfway houses usually don't take guys like me who served all their time. They don't have anybody keeping tabs on us. Dismas took a big chance on me," Adkins said. "I'm very grateful, fortunate and thankful for that."

Adkins, who spent most of his life working in construction, said he fell into the groove of the screen printing business pretty quickly. At 62, Adkins said he hopes he won't have too many more career switches ahead of him. "My clock is ticking down and I'd like to get there gracefully," he said.

He said Dismas has been a true lifeline for him and has made the difference between post-prison success and failure. "I couldn't have prayed for a better outcome," Adkins said. "I consider myself part of the Dismas family now."

[Theresa Laurence is a staff writer for the Tennessee Register, newspaper of the Nashville diocese.]