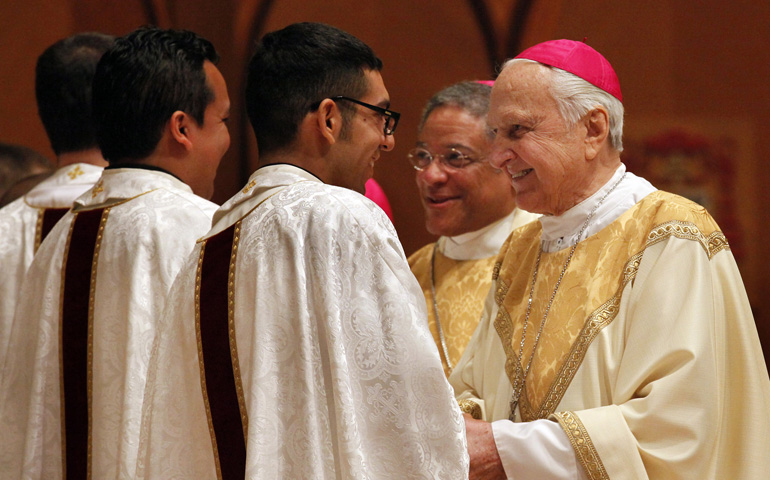 Retired Auxiliary Bishop Thad J. Jakubowksi of Chicago died Sunday at St. Mary of Providence Home, where he lived. He was 89.

A vigil is scheduled for Thursday at St. Robert Bellarmine Church, with a funeral Mass to be celebrated Friday at Holy Name Cathedral. Fr. Thomas Mulcrone, Chicago Fire Department chaplain, who lived with Jakubowksi at St. Mary of Providence, is to give the homily.

Jakubowksi was remembered as a pastor and teacher, someone who was direct and approachable.

"He was a realist," said retired Auxiliary Bishop Timothy Lyne, vicar for senior priests for the archdiocese of Chicago. "He was very good at looking at things and people and taking them as they were."

The late bishop had served as Lyne's co-vicar for senior priests since his retirement in 2003, a job he did with grace and joy, Lyne said.

"He got along well with people," Lyne said. "He had a good sense of humor. I'm very sorry about his death."

Jakubowksi was born in Chicago and attended St. Mary Magdalene School and Quigley Preparatory Seminary before entering St. Mary of the Lake Seminary in Mundelein. He earned a bachelor's degree and a licentiate in scared theology there, and later a master's degree in classics from Loyola University Chicago.

He was ordained a priest by Cardinal Samuel Stritch in 1950 and ordained an auxiliary bishop by Cardinal Joseph Bernardin in 1988. He served as episcopal vicar for the archdiocesan vicariate that takes in the northwest side of Chicago and the near west suburbs. He retired in 2003.

As a priest, he was associate pastor at St. Ann Parish from 1950 to 1957 before teaching classical languages and eventually becoming dean of students at Quigley North, where he stayed until 1976. From 1976 to 1988, he was pastor at St. Robert Bellarmine; during those years he also served as urban vicar and was head of a deanery. He then resided at St. Mary of Providence, a home for women with developmental disabilities.

He also was the executive director of the Catholic League for Religious Assistance to Poland.

In stories from the Chicago Catholic at the time of his ordination as bishop, he said he planned to use confirmation liturgies to encourage vocations to the priesthood and religious life. He also shared his optimistic worldview, saying, "There are no problems in the world, they're all opportunities."

Jakubowski is survived by a brother, Edward, and nieces and nephews.