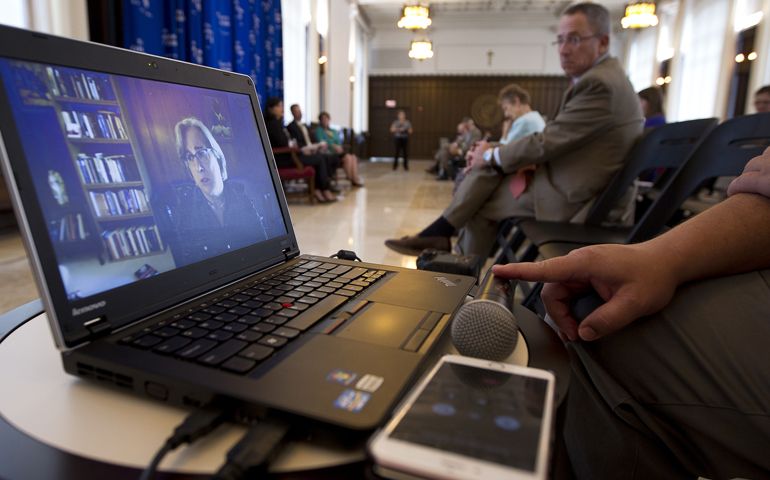 Janet Smith talks via Skype Sept. 20 at The Catholic University of America in Washington. (CNS/Tyler Orsburn)

Washington — A group of Catholic scholars Sept. 20 reaffirmed the Catholic church's teaching on "the gift of sexuality" and its long-standing prohibition on artificial birth control as outlined in Humanae Vitae, Blessed Paul VI's 1968 encyclical.

In a statement released in Washington, they rejected calls for the church to change its teaching by another group that issued a statement the same day at the United Nations.

"We, the undersigned scholars, affirm that the Catholic Church's teachings on the gift of sexuality, on marriage and on contraception are true and defensible on many grounds, among them the truths of reason and revelation concerning the dignity of the human person," they said.

The scholars said the "church's constant and consistent teaching on human sexuality," as explained in Humanae Vitae, "has been reaffirmed" by every pope since its release, most recently by Pope Francis in his apostolic exhortation Amoris Laetitia ("The Joy of Love"), released in April.

"Scholarly support for the church's teachings on the gift of sexuality, on marriage and on contraception has burgeoned in recent decades," they said. "Moreover, institutes and programs supporting that teaching have been established all over the world. Even some secular feminists and secular programs have begun to acknowledge the harms of contraception."

The other statement, issued at the U.N., was from an ecumenical group of Catholic and other moral theologians, ethicists and economists from around the world, under the auspices of Wijngaards Institute for Catholic Research, based in England.

"Our goal is to encourage the Catholic hierarchy to reverse their stance against so-called 'artificial' contraceptives," said the Wijngaards group, which claimed Humanae Vitae ("Of Human Life") is based on faulty reasoning.

"The decision to use modern contraceptives can be taken for a variety of morally worthy motives, and so it can be responsible and ethical," it said in its statement, "On the Ethics of Using Contraceptives."

Signatories of the Wijngaards declaration include Fr. Charles Curran, who in the 1980s was told by the Vatican that he no longer had permission to teach as a Catholic theologian because of his dissenting positions on church teaching about sexual morality. Another signer is Fr. Peter Phan, who teaches at Georgetown University; his writings on religious relativism, or that many faiths offer valid spiritual paths, came under scrutiny by the Vatican.

The homepage of the institute's website describes the organization's mission as "promoting gender equality and shared decision-making in the church."

The Wijngaards group said it was invited to present its statement at the United Nations Sept. 20. Copies were being made available "to all U.N. departments and development agencies ... trying to navigate the relationship between religious belief and women's health as they work toward the U.N. Sustainable Development Goals," it said.

"We cannot pretend that it is still 1968 or ignore the harm done by the sexual revolution," said John Grabowski, associate professor of moral theology and ethics at The Catholic University in Washington. Grabowski, who was an expert at the 2015 Synod of Bishops on the Family, made the comments in a Sept. 20 news release about the scholars' statement released in Washington.

"Unfortunately, the Wijngaards statement fails to acknowledge the vindication of the teaching of Blessed Paul VI over the last 48 years by the sciences, the social sciences, and its further elaboration by the teaching of St. John Paul II and its support from Pope Francis," he said.

During a Sept. 20 news conference at Catholic University, a theology professor stressed that the statement presented to the U.N. failed to take into account the spiritual benefits of church teaching against artificial birth control, which allows for "fertility-awareness based methods of family planning." "There are great benefits to natural family planning," said Janet Smith, who holds the Fr. Michael J. McGivney chair of life ethics at Sacred Heart Major Seminary in Detroit and has served as a consultor to the Pontifical Council on the Family.

She said natural family planning improves marriages and brings people closer to God, their spouses and their children. It's also green since it is free and causes no harm to the environment.

Smith, who addressed the news conference by Skype, said when she first learned of the Wijngaards statement a few weeks ago, she planned to simply write a response to it, but the reaction grew larger and became "an opportunity for us to show the world there are many, many Catholics who support Humanae Vitae."

She speculated that if the ages of signers of the two different documents could be compared, she would guess that those who signed the document presented to the U.N. were at least 15 years older because she said many younger Catholics support the church's teaching on contraception, particularly those influenced by St. John Paul II's "theology of the body" -- teachings on human sexuality.

Grabowski and Mary Hasson, who directs the Catholic Women's Forum at the Ethics and Public Policy Center in Washington, also spoke at the news conference and stressed that the church's teaching on contraception offers something beyond biology.

Grabowski noted that there will be much more to say on this teaching as the 50th anniversary of Humanae Vitae approaches in 2018.The scholars' statement said the Wijngaards declaration "misdirects the conversation from the start by claiming that the argument against 'Humanae Vitae' is based primarily on 'biological laws.' 'Humanae Vitae' instead focuses, as it should, on the person's relationship to God and other persons."

"God is love. ... Because God is love -- a communion of divine persons -- he made men and women in his image: able to reason and to choose freely, with the capacity to love and to be in loving relationships," the statement said.

"God invites all people to share in his love. ... Every person is created to make a gift of self to God and others," it continued. "The gift of self means living in a way that promotes the good of everyone, especially those with whom one is in close relationship."

Marriage "was designed by God to enable a man and a woman to live out humanity's core identity and lovers and givers of life. ... Human sexual relations fulfill God's intent only when they respect the procreative meaning of the sexual act and involve a complete gift of self between married partners."

Quoting Humanae Vitae, the group said: "There is an unbreakable connection between the unitive meaning and the procreative meaning ... and both are inherent in the marital act. ... The teaching that contraception is always against God's plan for sexuality, marriage and happiness is not based on human law," the group said.

The statement also said that to live out "God's design for married love," husbands and wives need "moral family planning methods," which are available to them in "the many forms of natural family planning." Natural methods based on fertility awareness "are fully consistent with the church's teaching on marital chastity."

"Several well-argued versions of 'natural law' defenses support the church's teaching that contraception is not in accord with God's plan for sexuality and marriage," it said, noting that St. John Paul II's theology of the body "provides a powerful defense" of the teaching in "Humanae Vitae."

Humanae Vitae also "speaks against the distorted view of human sexuality and intimate relationships that many in the modern world promote," it added.

[Contributing to this report was Carol Zimmermann in Washington.]

The end of the affair? 'Humanae Vitae' at 50