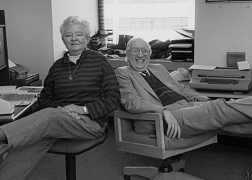 She was born in Jersey City, but Dorothy Vidulich was a true daughter of “The Nun of Kenmare,” the contentious, courageous, hierarchy battling Margaret Anna Cusack, founder of the Sisters of St. Joseph of Peace.

Vidulich, who entered the order in 1952 was also a member of the NCR Washington Bureau staff in the 1990s, and Cusack’s biographer. Sister Dorothy died July 12, at the order’s St. Michael’s Villa in Englewood Cliffs, New Jersey at age 85.

The Peace Sister was writing about Cusack, but in that biographical study, Peace Pays a Price, she could have been equally addressing the situation of U.S. women religious today when she wrote: “A prophet is an innovative person who foresees what should be done—often what must be done. She uses the good of the past to serve the present and throw light on the future. She is ahead of her times and usually suffers for her beliefs.”

Vidulich, professed in 1957, who had a BA in English from Seton Hall University and an MA from Villanova University, served in both education and administration.

She taught in high schools in Penns Grove, N.J., Van Nuys, California, CA and Weirton, West Virginia. From 1965 to 1969, she was a Province Councilor, co-directed the Peace and Justice Center at Englewood Cliffs College and served as coordinator of religious education at Sacred Heart Parish, Lyndhurst.

It was her work in Washington, D.C. as congregation director of peace and justice, then communications director of Network, the Catholic Social Justice Lobby, that led her to NCR as a reporter-researcher. She either knew everyone, or knew about them, and what had happened the moment it happened, a force of nature and an essayist, rather than a news journalist.

Her energy bounced off the page of the articles she wrote: It is only fair, in tribute, to let her writing speak for itself. This is from NCR, June 30, 1995:

It was the first major test: American women religious vs. the Vatican. It came 26 years ago in a Midwest auditorium housing the Conference of Major Superiors of Women, later named Leadership Conference of Women Religious.

The conference eventually backed down -- by just one vote. And out of the confrontation emerged a new flock of leaders of the women religious for that era, the Los Angeles-based Immaculate Heart Community.

These were the early days in the reform of religious communities mandated by the Second Vatican Council (1962-65). A few months before the Midwest gathering, Cardinal Ildebrando Antonuitti, prefect of the Sacred Congregation for Religious, had told all U.S. communities of sisters that the IHM sisters had legislated changes that were “deviations from the essence of religious life.”

The IHM sisters were put on the Vatican hot seat for their response to the 1965 “Decree on Renewal of Religious Life.” They had rejected a life pattern of community that had to conform to a Code of Canon Law issued by male clerics of another culture. The IHM sisters’ experimental rules, passed unanimously, recognized the role of authority as service and emphasized coresponsibility. The women included changes in traditional religious garb, scheduled prayer, ministry, lifestyle and governance.

Such alleged “deviations” prompted Fr. Edward Heston, the representative from the Vatican Congregation for Religious and Secular Institutes, to demand that the women superiors gathered in the 1969 assembly refrain from passing a resolution supporting the IHMs.

The assembly resolution for support for the IHMs was hotly debated. Some members feared it would signal disloyalty to the church.

At the back of the hall where Heston spoke, Sr. Angelita Myerscough, superior of the Adorers of the Blood of Christ, and Sisters of Mercy superior, Sr. Thomas Aquinas (Elizabeth) Carroll, strategized.

When Heston told the women superiors they must not pass the resolution but should end the debate, Carroll took the microphone and said Heston’s intervention was “inappropriate.” She continued to argue in favor of the resolution -- which failed by one vote, a decision that alienated some conference members.

More than a quarter of a century later, most orders of women religious have made changes similar to those chosen by the IHMs, but in the late 1960s the IHMs were pegged as “radicals.”

Founded in Spain in 1848, the IHMs sent 10 missioners to California in 1871 where they established Immaculate Heart College in Los Angeles and staffed parochial schools throughout California. Outnumbering the Spanish community by the turn of the century, the IHMs of the United States became an independent institute under Vatican law.

For months after the CMSW assembly, the IHM sisters met with stalwart opposition from Los Angeles Cardinal Francis McIntyre, who rejected everything they proposed.

Persistent dispute and “investigations” continued for the IHMs under McIntyre and the Congregation for Religious and Secular Institutes.

IHM President Anita Caspary eventually went to Rome, petitioning Pope Paul VI to consider the community “a new form of religious life,” but there was no response. Then McIntyre ordered the IHMs to curtail their experimental activities and conform to the Vatican definition of religious life or discontinue teaching in Los Angeles archdiocesan schools.

“There was anger, there were tears and frustration,” recalled Caspary, who led the IHM community until 1973.

Then, at a December 1969 IHM meeting, more than 300 sisters voted to become a non-canonical community of religious persons, thereby freeing themselves of Rome’s control. About 50 sisters continued the traditional community under official Vatican recognition. Caspary, who is writing the IHM history, recalled that establishing a voluntary lay Immaculate Heart Community “relieved us from threats and difficulties with the church under which we lived at that time.”

Caspary said the change “gave us the freedom to be self-determining and to make moral choices on the basis of conscience without leaning on the authority of others.” She said this is “the same struggle for feminist values that continues for women in all walks of life today, especially for women in the church.”

Many IHM members remained in education; others went into law, social work, parish ministry, inner-city development, the arts, and the administration of public and nonprofit organizations. Immaculate Heart College Center, Los Angeles, founded in 1981 as successor to IHM College, is administered by Anne Moran, who is not an IHM member. The college boasts an offering that probably would not have endeared the sisters to McIntyre: a master’s degree in feminist spirituality.

Today’s lay community is made up primarily of Catholic single and married women, but it also includes men and people of different faith traditions who make an annual commitment of “time, talents and treasure” to the IHM community.

For many U.S. women religious, the IHMs were pioneers, and that meant they sometimes had to marginalize themselves to lead. Other orders, the Loretto Community under Sr. Mary Luke Tobin, for example, picked up the IHM momentum. Gradually most women’s congregations have undergone some degree of transformation.

Looking ahead, Caspary said most orders are not agonizing over declining numbers. “I am sure there is no prophet among us who would suggest an unlimited future for us or for any community of religious persons. But this is not in any way a statement of despair,” she said.

“The world has changed dramatically in the last 25 years, and, in part, our continued life means a constant updating, a renewed search for the ways in which the IHM community can best serve. What really matters is not length of life, but fidelity to our goals and the deepening of our relationship with the living God.”