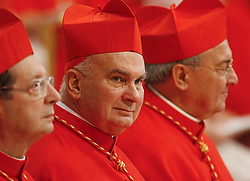 U.S. Cardinal John P. Foley sits among other cardinals after receiving his red biretta from Pope Benedict XVI during a consistory in St. Peter's Basilica at the Vatican on Nov. 24, 2007. (CNS photo/Paul Haring)

DARBY, Pa. -- U.S. Cardinal John P. Foley, who spent more than two decades leading the church's social communications council and later worked for the church in the Middle East, died Dec. 11 after a battle with leukemia. The cardinal, who had been residing at Villa St. Joseph, the home for retired Philadelphia archdiocesan priests, was 76.

Cardinal Foley's media-friendly style and quick sense of humor shone in person and throughout the numerous speeches and homilies he delivered around the world. He often spoke of the joys of working for the church, telling his audiences that while the pay often is not great "the benefits are out of this world."

Last February he retired from his post as grand master of the Knights of the Holy Sepulcher, a chivalric organization dedicated to supporting the Latin Patriarchate of Jerusalem and to responding to the needs of Catholics in the Holy Land.

Addressing the 2010 Synod of Bishops on the Middle East, he said he was convinced that "the continued tension between the Israelis and the Palestinians has contributed greatly to the turmoil in all of the Middle East and also to the growth of Islamic fundamentalism."

"While many, including the Holy See, have suggested a two-state solution to the Israeli-Palestinian crisis, the more time passes, the more difficult such a solution becomes, as the building of Israeli settlements and Israeli-controlled infrastructure in East Jerusalem and in other parts of the West Bank make increasingly difficult the development of a viable and integral Palestinian state," the cardinal said.

He told participants in a U.S.-based conference on the Holy Land in 2009, "The most tragic thing I have seen is the miles-long wall that separates Jerusalem from Bethlehem and separates families and keeps farmers from the land that has been in their families for generations. It is humiliating and distressing."

The cardinal said he understood Israel's need for security but added, "many of these measures raise serious human rights issues that they refuse to acknowledge and address."

To many, the cardinal was the voice they heard giving commentary during the pope's Christmas midnight Mass. For 25 years, beginning in 1984, his voice was heard not only in North America, but also Asia, Africa, Europe and, for many years, Australia.

The longtime journalist told Catholic News Service in 2007 that he always tried to take "a positive approach toward the means of communication and toward the people who run them." For decades he helped media gain access to cover or rebroadcast Vatican events.

As head of the Pontifical Council for Social Communications from 1984 to 2007, the cardinal took the lead in articulating Catholic policy with regard to the media. Under his leadership, the council issued separate documents on ethical standards in advertising, communications and the Internet. It also produced a document denouncing pornography.

He helped launch the first Catholic program bank for Catholic broadcasters and encouraged efforts to narrow the "digital divide" separating countries where there is widespread access to the Internet and where there is almost none either because of poverty or government efforts to restrict citizens' access to information.

His time at the council coincided with the unfolding of the clergy sex abuse scandal -- first in North America, then in other parts of the world. He said the sexual abuse of children by priests was only "the tip of an iceberg" of the wider scope of abuse perpetrated against the world's children.

"A much wider and even more tragic story of child abuse that takes place, first of all, in the family and then, in many ways, throughout society," he said.

However, the cardinal also said church officials must be honest about the situation. In dealing with the sex abuse scandal, he said, the church's reaction must be "to exercise virtue and, in the absence of virtue, exercise candor, which is a virtue itself. We have to be honest. We cannot deny what happened."

He said Catholic journalists sometimes have "encountered the situation of those who did not want others to learn about what they did ... because it was bad news."

"We know, as journalists, that the more some people try to cover up bad news, the more likely it is to be known," he said.

Born in the Philadelphia suburb of Darby on Nov. 11, 1935, he was ordained a priest in Philadelphia when he was 26.

The graduate of the School of Journalism at Columbia University in New York said his media experience dated back to the seventh grade, when he started writing radio plays on the lives of saints. Not only were his plays aired but, at age 14, he was asked to be an announcer for Sunday morning programming for what was then WJMJ in Philadelphia.

Between stints as assistant editor of Philadelphia's archdiocesan paper, The Catholic Standard & Times, in the 1960s, he completed his graduate studies in philosophy in Rome, where he also worked as a news reporter. His beat included covering the Second Vatican Council from 1963 to 1965.

In 1970, he was appointed editor of the archdiocesan paper, a position he held until Pope John Paul II named him an archbishop and appointed him head of the social communications council in 1984.

You are my beloved!

America sacramentalizes guns as God's gift to the good. This is heresy

Cardinal Schönborn: It is 'a time of thirst' for the church