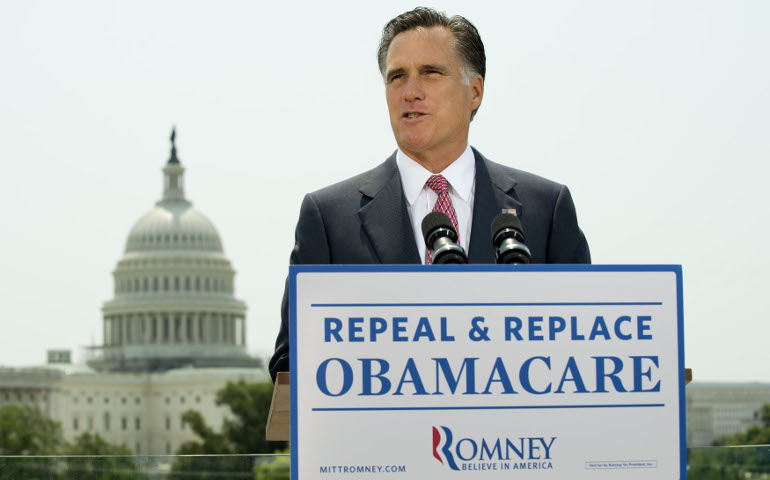 Republican presidential candidate Mitt Romney delivers remarks on the Affordable Care Act in Washington on June 28 after the Supreme Court upheld a majority of the law. (UPI/Kevin Dietsch)

That crackling sound in the October air signals not just fall's arrival, but crunch time for campaigns. While candidates hit the road for the final days, political groups and committees will ramp up their mailings, email alerts and political ads in a last-ditch effort to push their targeted politicians into -- or out of -- office.

Those committees include CatholicVote.org, a lay-run, grass-roots organization committed to "living out the truths proclaimed by Christ and His Church in the modern world," according to its website. Since its creation in 2008, the group has gained national attention on several occasions through controversial ads it aired online, most notably a Super Bowl ad NBC rejected that used President Barack Obama's upbringing in a single-parent home as an argument against abortion.

With such advertising tactics and fueled solely by private donations, the Chicago-based CatholicVote.org seeks to mobilize voters around three core issues -- pro-life, traditional marriage and religious freedom -- leading the group to focus this election season primarily on opposing the Health and Human Services mandate for nonreligious employers to provide contraception coverage to employees.

"We think the fight against the HHS mandate has to be done on three fronts," CatholicVote.org executive director Joshua Mercer told NCR. "We fight it in the courts, but then we need a new Senate and, yes, a new president. And we're reminding Catholic voters that Mitt Romney promised on day one to overturn the mandate."

Romney's promise led CatholicVote.org -- composed of three legal entities, including a super PAC -- to endorse his candidacy for president after he chose Wisconsin Rep. Paul Ryan as running mate. In the primary, the group contributed more than $100,000 to former Pennsylvania Sen. Rick Santorum's bid for the White House.

As of Aug. 29, CatholicVote.org has spent $20,000 on radio ads for Romney in Iowa and Wisconsin, according to the latest documents filed with the Federal Election Commission. In addition, Mercer said their super PAC anticipates spending up to $200,000, likely advocating Romney and other candidates endorsed through its website -- one Democrat, eight Republicans -- including $8,500 to the Senate campaign of Richard Mourdock, an Indiana Republican who has supported the University of Notre Dame's lawsuit against the HHS mandate.

While financial records show the group channeling its funds mostly toward conservative candidates, it insists it is not politically affiliated.

"It is true that we have been more supportive of Republican candidates," Mercer said, "and I think that speaks to the fact that unfortunately the Democratic Party is making more and more steps away from Catholic values."

The group, with a network of 600,000 email subscribers and supporters, hasn't limited its efforts to election races, also registering voters and providing education on the issues it views most important. In Iowa, it has campaigned to remove state Supreme Court Justice David Wiggins, among the seven judges in 2009 who legalized same-sex marriage. CatholicVote.org is also involved in a federal lawsuit on behalf of a Catholic St. Louis businessman against the HHS mandate, which a judge dismissed Sept. 28; an appeal has been filed. On Sept. 25, CatholicVote.org sponsored a teleconference with Glenn Beck and 143,000 participants on the importance of the Catholic vote.

The roots of CatholicVote.org emerge from Fidelis, a group founded in 2005 by Mercer, Brian Burch and Joseph Cella. That year the three launched a website called CNNBias.org, in response to the cable network's plan to air a controversial ad linking then-Supreme Court nominee John Roberts to violence at abortion clinics.

Later that year, Burch and Mercer formed CatholicVote.org, running radio ads in Pennsylvania against incumbents who supported the Patient Protection and Affordable Care Act, and gaining national attention for a dramatic online ad touting life as the election's most important issue. In January 2009, NBC rejected a possible Super Bowl ad showing a baby in the womb while a violin plays and captions tell of the broken home Obama would overcome, ending with the words "Life: Imagine the Potential."

In September, Burch, CatholicVote.org's president who has taken a 75-day leave to work directly with the Romney campaign, described the group's mission at a Knights of Columbus hall in Westborough, Mass., as building an army of political activists, evangelists and prayer warriors, and in terms of engagement, "do for the Catholic voter what the NRA does for gun owners," according to the Worcester Telegram & Gazette.

Similar in-battle rhetoric appears in the group's mailings, sent to 400,000 Catholics, such as a January 2012 letter reminding its recipients that the Obama administration has declared " 'WAR' on the Catholic Church" -- a reference to a 2011 speech HHS secretary Kathleen Sebelius made at a pro-choice luncheon -- and that "we must oppose and we must stop this unprecedented trampling on the rights of Catholics!"

"We just think this 2012 election provides a critical choice, and especially when you look at the HHS mandate, we think that's the No. 1 issue in the minds of Catholic voters," Mercer said.

But the polls suggest otherwise.

A September Public Religion Research Institute poll found a majority of Catholics (54 percent) and the general public (53 percent) ranked the economy as their primary issue in the presidential race, with 19 percent of each naming health care -- the second-highest ranking. Only 4 percent of Catholics -- and only 5 percent of the general population -- identified same-sex marriage or abortion as the issue most affecting their presidential vote.

"By and large, this is not something rank-and-file Catholics or everyday Americans are really concerned about as a voting issue," said the research institute's founder and CEO, Robert P. Jones. "That's not to say they don't have opinions on it, but it is to say that it's just not something that's going to be driving them to polls."

As for the HHS mandate controversy, a Public Religion Research Institute study in April found 57 percent of Catholics polled did not believe religious liberty in the U.S. was under attack, with only 6 percent of those who did citing the mandate.

Jones said voter trend data suggests that campaigns like the U.S. bishops' Fortnight for Freedom and Romney's religious liberty ads haven't been effective in swaying opinion on the president, given that Obama has overcome an April Romney edge to lead him 54-39 in mid-September among registered Catholic voters.

"Any campaign that's out to leverage the Catholic vote by leading with issues like same-sex marriage or abortion is really in for an uphill climb, because these are just not the issues that are front and center for Catholics this year," Jones said.