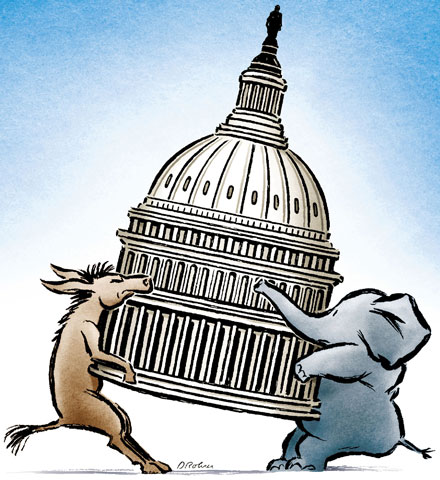 In this bizarre election year, Donald Trump has been able to suck all the oxygen out of the political room on a daily basis, dominating the news cycle whenever he desires. But, in addition to electing a president in November, voters will be selecting a new Congress, and those races are looking increasingly interesting.

Ever since Republicans took control of the U.S. House in 2010, they have been able to frustrate President Barack Obama's legislative agenda. The gridlock got worse when the GOP took control of the Senate two years ago. So, even if Hillary Clinton wins the presidency in a landslide, her ability to get anything done will depend largely on how the congressional contests turn out.

In the Senate, the Republicans currently hold a majority of 54, but because of the many seats they picked up in the 2010 tea party wave election, they are defending 24 of those seats this year. And because the electorate is an off-year election like 2010 and is more Republican than in a presidential year, many of those GOP senators are running in states that Obama won.

In Pennsylvania, Sen. Pat Toomey captured the Senate seat in 2010 with 51 percent of the vote six years ago. Four years ago, in 2012, Obama won the commonwealth with 52 percent to Mitt Romney's 47 percent, and a raw vote margin of more than 300,000 votes.

This year, Toomey is running against Democrat Katie McGinty, who ran the state's Environmental Protection Department. The RealClearPolitics average of polls, as of Sept. 1, has McGinty leading by 1.2 percentage points. RealClearPolitics also has Clinton winning Pennsylvania by a 6-point margin.

A similar dynamic plays out in New Hampshire. Six years ago, the tea party wave catapulted Kelly Ayotte, a former state attorney general, into the U.S. Senate with a whopping 60 percent of the vote. Two years later, in 2012, Obama beat Romney with 52 percent of the vote to Romney's 46 percent, despite the fact that Romney and his family keep a home in the Granite state.

This dynamic -- a first-term Republican incumbent who won in the tea party wave in 2010 -- is playing out in other states as well. Republican Sen. Mark Kirk of Illinois is trailing Congresswoman Tammy Duckworth in two of the three polls taken in recent months. In Wisconsin, Sen. Ron Johnson defeated incumbent Democratic Sen. Russ Feingold six years ago, but today Feingold is running to take back his seat. The RealClearPolitics average has Feingold up by 9.7 percentage points. In both states, Clinton is winning handily.

Not every state Obama won in 2012 is tilting to the Democrats in this year's Senate races. In Florida, both parties hold their primaries at the end of August, so the race has not entirely jelled. Still, incumbent Republican Marco Rubio holds a 5.7-point lead in the RealClearPolitics average of polls over the likely Democratic candidate, Congressman Patrick Murphy. Obama won Florida very narrowly in 2012, 50 percent to 49 percent.

In Ohio, incumbent Sen. Rob Portman is looking likely to retain the seat he won in 2010, leading former Ohio Gov. Ted Strickland by 7.5 percentage points in the RealClearPolitics average. Similar to Florida, Obama's margin in the Buckeye state, 51 percent to 48 percent, was not as large as it was in New Hampshire or Wisconsin.

Overall, the Cook Political Report, one of the more reliable prognosticators of election results, lists only one of the 10 seats the Democrats are defending as a "toss up": the Nevada Senate seat being vacated by Sen. Harry Reid. Conversely, of the 24 seats the Republicans are defending, 11 are considered solid and three are rated "likely" holds for the GOP. An additional two seats are in the "lean Republican" category, and eight are rated as "toss up." The GOP needs to hold five of those seven if it wants to retain control of the Senate.

One challenge for Republican candidates this year is how they deal with Trump. Kirk, in heavily Democratic Illinois, has announced he will not be voting for Trump. Others are trying to ignore Trump, but that is like ignoring the ocean while at the beach. Trump's ability to dominate the news means that candidates will be asked again and again to defend his latest outrageous remark, explain why they have or have not endorsed him, whether they would appear with him when he comes to their state, etc.

Every time, they risk alienating his most stalwart supporters or the moderate voters who are repulsed by Trump. Senate elections are always a tightrope walk, because if you win in a presidential year, which favors Democrats, you have to seek re-election in an off-year, which favors Republicans, and vice-versa.

In addition to the media challenge, coordinating the nuts and bolts of a campaign are complicated by Trump's unorthodox political style.

"The campaign organization of each candidate also matters," said Matthew Green, politics professor at The Catholic University of America. "So far, Trump is at a serious disadvantage in this respect. By most accounts, his campaign is too small and disorganized, and he has almost no 'ground game' to speak of in key states like Florida, Ohio and Pennsylvania. There are just not enough Trump volunteers or paid staff to do the necessary work of knocking on doors, registering new voters and getting people to the polls. Provocative tweets are no substitute for campaign organization."

In swing states where a presidential candidate and local candidates normally work together, that collaboration may be absent this year. In a close race, the ability to get people to the polls could make the difference.

All of these dynamics apply to the House races, but the GOP has one ace in the hole: redistricting.

Congressional districts were carved up after the 2010 census and, as noted, 2010 was a big Republican year, not just in seats for Congress but for state legislative seats and governorships as well. Republicans were able to gerrymander districts in a way that makes it very hard for the Democrats to capture control of the House until after the 2020 census. Additionally, the Republicans currently hold 247 seats, so the Democrats would need to flip 31 seats to win back the speaker's gavel.

That is a tall order. And there are four seats currently held by the Democrats that are in the "toss up" column. If they lose, say, two of those, they need to flip 33 seats. Impossible? Almost. But if Clinton wins by 10 points nationally, the Democrats have a shot at winning back the House as well as the Senate.

A version of this story appeared in the Sept 23-Oct. 6, 2016 print issue under the headline: Do Dems have a shot at taking Congress?.