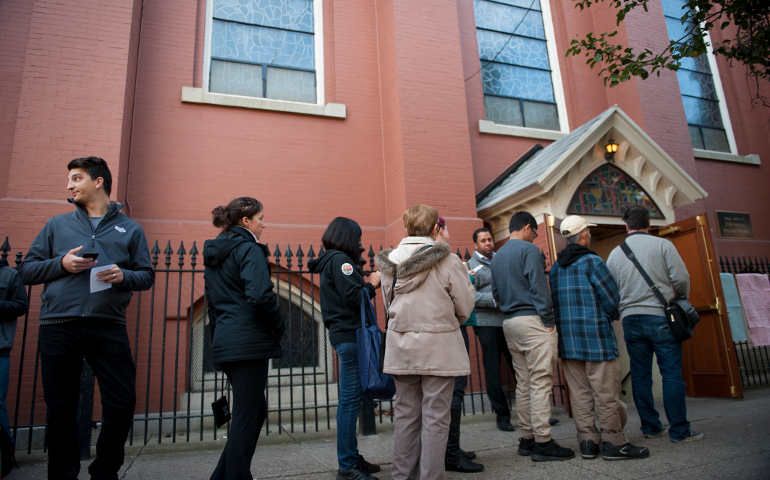 Voters wait for polling to begin Nov. 8 outside Annunciation Church in Philadelphia. (CNS/Tracie Van Auken, EPA)
This article appears in the Transition to Trump feature series. View the full series.

We’ve come through the most bitter, toxic and demoralizing presidential campaign in modern history. Though the votes have been cast and a winner declared, the republic has been seriously wounded, divisions have deepened and widened, large swaths of the country have drunk deeply of the toxic brew of intolerance and hate, or dismissiveness and denigration.

What are we Catholic Americans to do?

The divisive issues, tensions and attitudes that were magnified on the campaign trail will not dissipate soon. The key to Donald Trump’s victory was his promise to bring change to Washington, to blow up the status quo. Nothing in his campaign leads us to believe that he can bring disparate parties together. Trump won the campaign, but unknown is how he can govern. He does not even have the full support of the Republican congressional leadership. Republicans, now in control of the White House and both houses of Congress, will have to act much more responsibly than they have in recent years when their sole agenda was to oppose President Barack Obama. What the next four years will bring cannot be predicted.

Our one hope is the belief that our Constitution and the American people are strong enough to weather this storm. This country has at critical times in its history rallied together, overlooked differences and pulled through crises as bad and even worse than what we face now. And to be clear, the crisis we face is not the election of Trump, per se, but a broken political system and a divided nation.

We would like to say that as Catholics — a church with nearly equal numbers of Democrats and Republicans but many common agendas because of our social justice tradition — could play an important role bringing healing to society, but regrettably, Catholics seem as divided as society in general.

The U.S. Conference of Catholic Bishops, which meets next week in Baltimore and will be choosing its own leadership team, is as divided as America itself. Instead of binding wounds and heralding a path of justice, the bishops have not reached a consensus among themselves on how to move forward in unity. Many are resistant to the initiatives of Pope Francis and mired in a culture warrior stance that has turned many of them into political partisans. Perhaps the bishops can set aside differences, and make it clear that Catholics across the political spectrum can work in good conscience for the common good. But four days before they gather, that doesn’t seem likely.

Trump was, in almost all respects, a despicable candidate who showed no regard for — or knowledge of — democratic processes, basic policy or the demands governance places on elected officials. But one thing of value emerged from the “movement” he created: a raw view of just how disenfranchised some Americans are, how distant from the political process some feel and how angry and frustrated those elements of the population have become. The political establishment, the journalistic establishment and the pundits underestimated the intense anger of white, working-class America. Trump rode this anger to victory.

If Trump’s bluster was easy to dismiss in most cases, one bit of his analysis rang true. Election cycle after election cycle, Democrats have renewed acquaintances with white, working-class America, one of their historic constituencies, only to ignore those voters and their plight post-election, which is why that friendship has frayed in recent years and this year it was utterly broken. Hispanics, in reaction to Trump’s rhetoric about immigrants, came out in record numbers but not enough to save the day for Secretary Hillary Clinton or the Democratic Party.

It truly is a time for a new kind of politics in this country. Portions of the country seethe with discontent and feel marginalized. What is needed now is to bring these disenfranchised back into the fold and refocus this anger into political initiatives. We have little confidence that Trump can do this.

To move forward, we will need political leaders who will travel back to areas of those states inhabited by the most disenfranchised, the most angry, to listen to them and hear their concerns. We need to understand better and know better the human face of the momentous social changes underway. We need to absorb some of that anger in close quarters as the first step in convincing people they are not forgotten.

“All politics is local” is still a relevant bit of wisdom. Perhaps it is at the local level where Catholics, too, can begin the hard work of repairing broken bonds and redefining common commitments. In Hope for Common Ground: Mediating the Personal and the Political in a Divided Church, St. Louis University moral theologian Julie Hanlon Rubio argues for “a prioritization of the local” as the locus for social justice action, because, she writes, “the strength and heart of Catholic social teaching is in its anthropology, which characterizes human beings as profoundly and inescapably social, fulfilled in their connections to others and in the practice of self-gift in both the personal and social realms. This is where Christians bring something distinctive to public discussion, an alternative to the idea of the isolated individual and to a version of human flourishing focused on freedom, happiness and success.”

Perhaps, in our community, now is not the time for grand plans and sweeping gestures. Perhaps what Catholics need now is time for the quiet, interior work that will bring us back to the center of our traditions. Perhaps now is the time to call on the balm and healing our sacraments promise. In this our bishops and pastors can take the lead.

For those paying attention, regardless of personal politics, this prolonged election cycle has exposed the deep hurts and lasting damage that neglected members of our society endure — whether blacks in the urban centers or whites in rural and rust belt regions; immigrants who are not made welcome or women whose gains made over decades are severely threatened. The danger ahead, aside from what might occur given the president-elect's own unpredictability, is that his victory may just exchange one disenfranchised group for others.

This is a profound moment in our nation’s history and in our church’s history in this country. The question now is whether we have the courage and leadership to confront these hurts, work for justice and begin the healing process.

Editorial | Editorial: In toxic campaign, Catholics may find the impetus for just action

US election's very essence was indecency