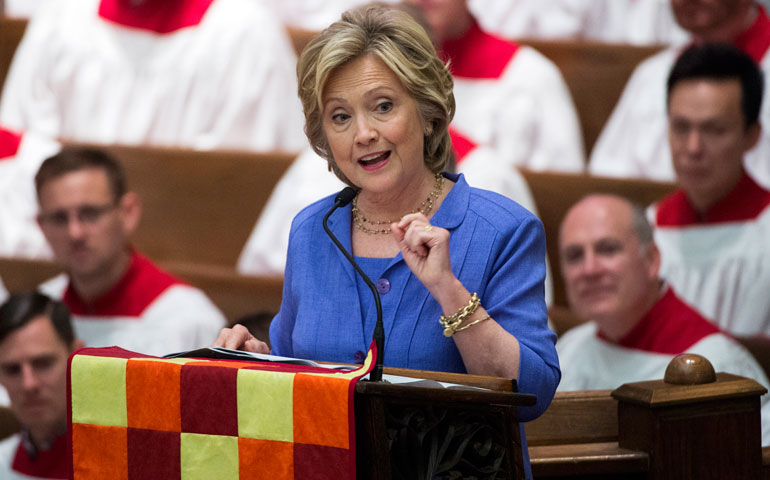 Savorer as I am of the politics game, and admirer of many Democrats going back to the spirited days when women and men of conscience like Barbara Jordan, Gene McCarthy, Pat Schroeder, Philip Hart, Mary Rose Oakar, Harold Hughes, Patsy Mink and George McGovern were in Congress, I wish I could journey to your convention in Philadelphia. But I gave up pep rallies after my last season as a high school basketball player in Long Island.

True, we didn't have balloon drops from the rafters after winning games, which is likely in Philadelphia and could be a palatable treat to behold. A minor treat, though. Don't take it personally, delegates and superdelegates, that I'm not coming. And don't offer to send a stretch limo to get me there and back. Save the wheels for your heeled mega-donors.

If you chance to run into Hillary Clinton, give her my best. Not that she's waiting for it. I met her twice, the first time in the mid-1990s when she came to Garrison Elementary School in a low-income neighborhood about a mile north of the White House to learn about a literacy and baseball program run by one my lads, John -- a former minor leaguer in the Baltimore Orioles organization. He had persuaded a half-dozen District of Columbia Superior Court judges to volunteer and inspire children to get a taste for reading, much the same as they had for baseball after school.

It was natural that Hillary would have prehensile feelings for a successful children's program. Defending children's rights was one of her earliest and perhaps strongest academic passions at Wellesley College and then Yale Law School, from which she graduated in 1973. While a law student, she volunteered at the Yale Child Study Center as well as devoting a year to investigating child abuse cases at the Yale New Haven Hospital.

Her first employment out of law school was as staff attorney at the Children's Defense Fund founded in 1973. At its 40th anniversary celebration three years ago, the fund's founder, Marian Wright Edelman, praised her longtime ally: "She cares deeply about children. She perseveres. She's an incredibly hard worker, and she stays with it. ... I'm just so proud of her."

The second time I met Hillary was at a shiva last December for Sandy Berger, who served in the White House as Bill Clinton's national security advisor from 1997 to 2001. It was a moment of personal grace that Hillary came to offer comfort to the Berger family in their Washington home in the American University Park neighborhood. Her friendship with Berger dates to the early 1970s when they, along with Bill, were novice but idealistic campaign workers in Texas for McGovern's presidential run, ill-fated as it would be.

Nearly four decades later, McGovern, the son of a Methodist pastor in South Dakota, would say of the young Methodist law student who had worked the phones and knocked on Texas doors for him: "She'll have my admiration for all my days."

Consistent with his serial sliming of Mexicans, Muslims, immigrants, the disabled and the press, Donald Trump, after blasting Hillary as a "world-class liar," raised doubts about her faith: "We don't know anything about Hillary in terms of religion," he charged in a June 22 speech, the day before flying off to Scotland to open a golf course. "She's been in the public eye for years, and yet there's no -- there's nothing out there."

In fact -- not that facts ever matter to Trump -- Hillary has often witnessed to her Christianity, including a speech to an audience of 6,500 in April 2014 at a conference of United Methodist women in which she said: "We need to wake up our world to what can and should be done" and start "rolling up our sleeves and taking the social Gospel into the world."

During Bill's presidency, she and her husband and daughter, Chelsea, were regulars at Foundry United Methodist Church, a few blocks from the White House and one of Washington's most liberalized parishes.

In response to Trump's blood-sport attack, Hillary ably deflected it with a reference to the well-known Methodist credo: "Do all the good you can for all the people you can, for as long as you can."

Enjoy the convention, delegates and superdelegates. Pop a balloon for me. No doubt, some of you share my dissents about lows in the Clinton record -- the 2002 pro-war vote, favoring the death penalty, chumminess with the Wall Street moneyed -- but none of those negatives should tank the positives, whether her political views or personal graces.

A version of this story appeared in the July 29-Aug 11, 2016 print issue under the headline: Give Hillary my best.