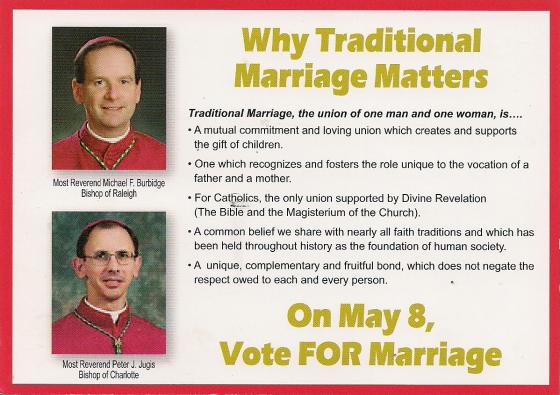 RALEIGH, N.C. -- In a final push to pass an amendment to the state constitution banning gay marriage, the bishops of the Raleigh and Charlotte Catholic dioceses have mailed postcards to registered Catholics in the state urging them to vote in favor of what they're calling the "marriage amendment."

North Carolina will vote on the amendment Tuesday May 8.

The post card campaign has prompted a complaint to the N.C. State Board of Elections, according a story in Raleigh’s The News & Observer.

Charlotte diocese director of communication David Hains said the diocese sent 56,000 two-sided color glossy postcards to all registered Catholic families in the diocese that covers the western portion of the the state. The diocese used the mailing list of households that receive The Catholic News Herald, the diocesan newspaper.

On its web site, the Diocese of Raleigh, which also sent out the same postcards, claims a circulation of about 70,000 households for NC Catholics, a glossy magazine that's published 10 times annually and mailed to registered Catholics. Hains said he could not release the cost of the mailing.

Titled, "Why Traditional Marriage Matters," the postcard, which features photos of both Bishop Michael Burbidge of Raleigh and Bishop Peter Jugis of Charlotte, states on both sides "On May 8, vote FOR marriage." It also includes a quote from Matthew -- "From the beginning the Creator made them male and female and said: For this reason a man shall leave his father and mother and be joined to his wife and the two shall become flesh." (Matt. 19:4-5)

If passed, the amendment, the state constitution would define marriage as being between one man and one women. Same-gender marriage is already illegal in the state. Although the amendment is simply titled, "Constitutional Amendment" on the statewide ballot, opponents have chosen to call the measure "Amendment 1," a term Hains opposes, but one that is widely used by the new media to identify the measure.

"The opponents to the amendment, they never use the word marriage to describe the marriage amendment, and I think that is a way to demonize it," Hains said. "They either did that out of ignorance or deceit. Now, I don't think the people that run that campaign are ignorant in any way, shape or form. They raised over two million bucks [in opposition to the amendment]. It's all about marriage."

According to a story in Raleigh’s The News & Observer, Carol Love, the former executive director of Common Cause North Carolina, a liberal-advocacy group, filed a complaint with the state board of elections over the postcard.

"My complaint is that the Catholic Diocese of Raleigh does not seem to be adhering to all state, and possibly federal, election and lobby laws, including reporting requirements, and request that the board of elections investigate this matter," Love wrote.

The postcard campaign is another setback for opponents of the amendment in the final days before the vote. On Wednesday, North Carolina's best-known evangelist, the Rev. Billy Graham, threw his support behind the amendment.

"Watching the moral decline of our country causes me great concern," Graham said in an excerpt from a statement that will be published in 14 newspapers statewide. "I believe the home and marriage is the foundation of our society and must be protected.

What it might mean to really listen to Trump voters