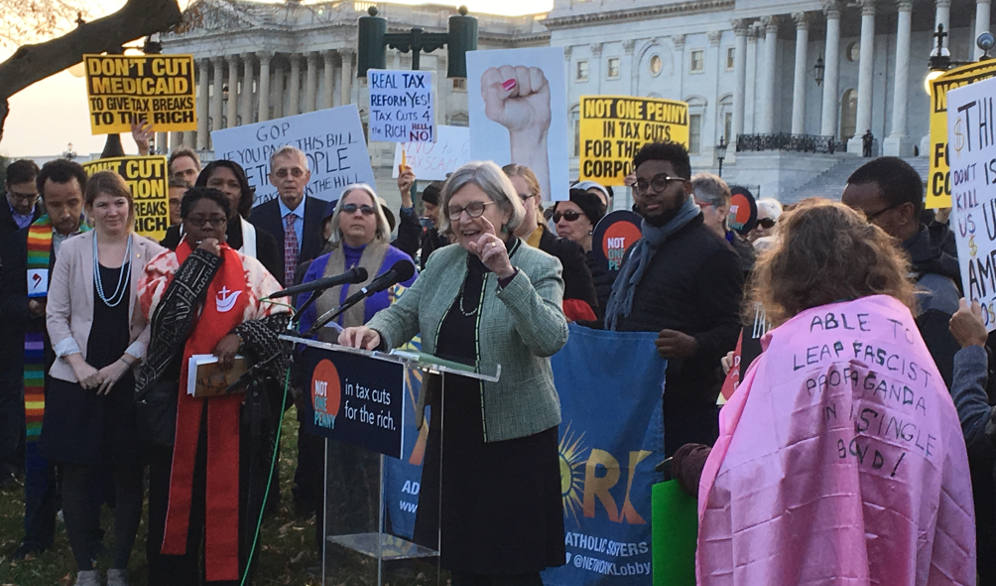 Interfaith leaders convened on Capitol Hill Thursday to call attention to the enormous harm the proposed Republican tax bill will cause to poor and middle-income Americans.

The day began with the arrests of Scripture-reading protestors and ended with a spirited rally on the Capitol lawn attended by House Minority Leader Nancy Pelosi (D-California) and other members of Congress.

To chants of "kill the bill" and"shame," Pelosi quoted Pope Francis' warning of the "dazzling blindness of money and power."

"It's a scandal, it's a crime," she said of the bill, which could pass as soon as Friday if all remaining Republican resistance to its provisions falls away. One by one, Republican holdouts have been caving to their peers in the Senate.

Just steps away, as Pelosi spoke, the Senate debated a package of tax cuts for the rich that would add $1.5 trillion to the national debt and take more than $2 trillion from programs for low-income people.

According to the bill, tax cuts for low-wage earners would expire in 2021 and increase 25 percent by 2027, while tax cuts for the wealthy would remain in place. Charitable giving is expected to take a hit from changes to the standard deduction, which would discourage itemized filing. The Affordable Care Act's individual insurance mandate is also on the chopping block.

Senators Bob Casey (D-Pennsylvania), Ed Markey (D-Massachusetts), Jeff Merkley (D-Oregon) and Rep. Steny Hoyer (D-Maryland) also addressed the crowd of about 150 people at the rally, which was sponsored by Not One Penny, a progressive coalition that opposes the Republican tax plan. All of the speakers decried the tax bill, with Casey referencing his Catholic faith and St. Augustine, "who said without justice, what are kingdoms but great bands of robbers?"

Sister of Social Service Simone Campbell led the rally and also spoke at a lunchtime policy briefing on a "faithful budget" proposal.

"We need a faithful budget, one that doesn't perpetuate what is basically a failed policy of trickle down" economics, said Campbell, executive director of the Catholic social justice lobby Network, at the earlier event. On the dais beside her at the briefing, which was sponsored by the Washington Interreligious Staff Community with an assist from Bread for the world, were speakers from the Jewish and Presbyterian traditions. 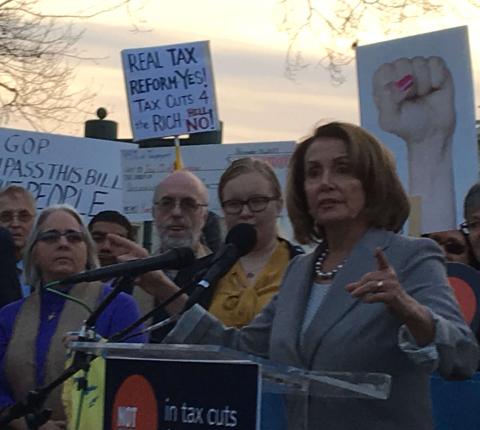 "We stand together in our various faiths to say there’s unity in our principles, unity in the application, and we call on the Senate to pay attention and create a faithful tax policy that can fund the common good," said Campbell, who broke down the priorities for a faithful budget, which include advancing true economic opportunity, ensuring adequate resources for shared priorities, prioritizing peacebuilding and human security, and meeting immediate need through programs such as Medicaid and the Supplemental Nutrition Assistance Program, both of which would see cuts in January when the Republican tax plan automatically triggers sequestration cuts.

Indivar Dutta-Gupta*, co-executive director of the Georgetown Center on Poverty and Inequality, broke down the tax proposal at the lunchtime briefing. Using dark humor and a handful of simple slides to illustrate his point, he said that the bill would disproportionately hurt low- and middle-income people and benefit the wealthy, more so as time goes by.

"That’s literally all you have to remember, and I will repeat it numerous times," Dutta-Gupta said, noting that everyone making less than $1 million per year will be worse off, and that programs for low-income families are not what’s driving deficits.

In the morning, in the atrium of the Hart Senate Office Building on Capitol Hill, a group led by Jim Wallis, president of Sojourners, read Scripture passages pertaining to care for the poor as dozens of supporters surrounded them. Senate staffers and other onlookers watched from above as Capitol Police – some of whom took pictures of the protesters first – ultimately arrested at least eight of them.

"We need a faithful budget, one that doesn’t perpetuate what is basically a failed policy of trickle down." -- Sr. Simone Campbell 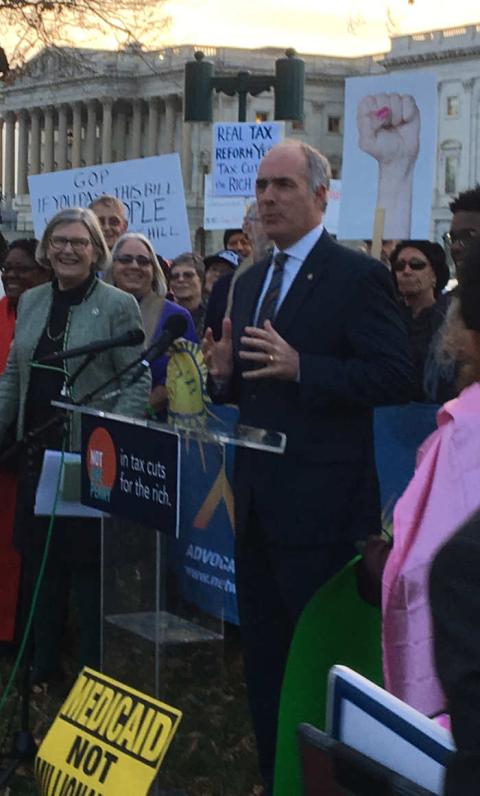 Most of those arrested carried copies of the "Poverty and Justice Bible," and Wallis began with a passage from Isaiah 10 that was also emblazoned on the protestors' banner: "Woe to you legislators of unjust laws … who rob the poor of justice," it read. The denominations represented included members of Catholic, Episcopalian, African Methodist Episcopal, and National Council of Churches groups.

"This tax bill assaults the people God calls us to protect," said Wallis. "A great injustice requires a great response."

Franciscan Sisters Marie Lucey and Maria Ortandini, holding signs that read "Franciscans say no to tax bill," lamented how passage of the bill would affect their ability to support the poor. "It involves so many the things we care about," said Lucey.

The last to be arrested was Barbara Williams Skinner, of the National African American Clergy Network, who rested her Bible on the floor before putting her hands behind her back and walking off with a Capitol police officer. Earlier, asked why she was protesting the tax bill, she used blunt language to describe its effects on the most vulnerable Americans.

"Where I come from," she said, "we call it the wealthy pimping the poor."