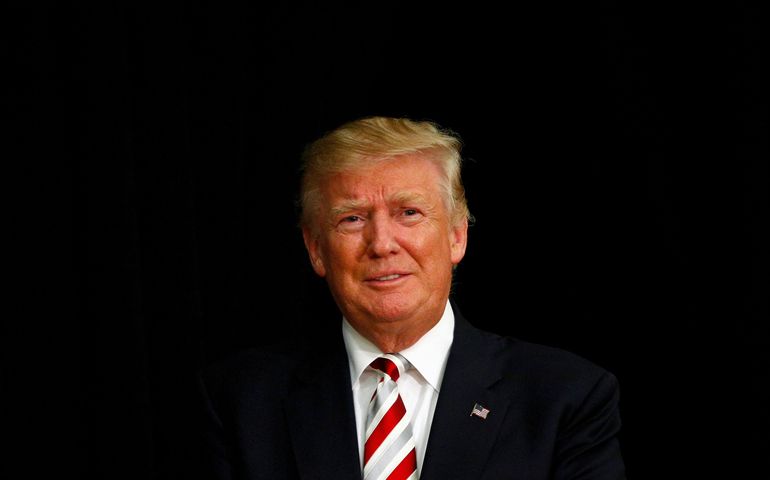 Donald Trump has a message for U.S. Catholics: I'll be there for you as president.

The Republican candidate for the nation's highest office offered those words in a letter, dated Wednesday and published by Catholic News Agency a day later, to Catholics gathered in Denver for the Catholic Leadership Conference. But the tone of the message indicated a wider audience in mind.

"Catholics in the United States of America are a rich part of our nation's history," Trump said. "The United States was, and is, strengthened through Catholic men, women, priests and religious Sisters, ministering to people, marching in the Civil Rights movement, educating millions of children in Catholic schools, creating respected health care institutions, and in their founding and helping the ongoing growth of the pro-life cause.

"I have a message for Catholics: I will be there for you. I will stand with you. I will fight for you," he said.

On the last point Trump stated, "I am, and will remain, pro-life," and promised to defend religious liberties, which he primarily described in the scope of the ongoing contraceptive mandate included in the Affordable Care Act and the U.S. Supreme Court case Zubik v. Burwell brought by several plaintiffs, including the Little Sisters of the Poor.

Trump has said he opposes abortion except for cases of rape, incest or where the mother's life is at risk. Clinton says she supports "safe, legal abortion" as part of women's access to critical health services and opposes government involvement in those decisions.

He said Clinton supports having the Little Sisters pay for contraceptives in their employees' health plans, and that they and other religiously objecting employers be fined if they don't comply. Clinton has stated that all women, regardless of their place of employment, should have access to birth control coverage.

"That is a hostility to religious liberty you will never see in a Trump Administration," he said.

In a May decision sending the Zubik case back to the appeals level in search of a final compromise, the Supreme Court said the legal objections raised by the petitioners satisfied the federal government's requirement of providing notice of their religious objections, and as a result were not susceptible to fines or penalties.

The hostility by Clinton that Trump described extended to the issues and policies "of greatest concern to Catholics," he said, which he listed as "life, religious liberty, Supreme Court nominations, affordable and quality healthcare, educational choice and home schooling." On those, he said the differences between himself and Clinton are "stark."

Trump repeated campaign promises to bring jobs back to the U.S., appoint strict-Constitutionalists to the Supreme Court, keep the country safe, "while respecting the dignity of each human being," repeal the Affordable Care Act and end Common Core while expanding education choice, the rights of homeschooling families. He did not include specific plans.

John Gehring, Catholic program director at Faith in Public Life, said the letter from Trump was an attempt to reduce the breadth and depth of Catholic social teaching "to a few buzzwords he thinks will appeal to pro-life voters."

"He ignores what Pope Francis constantly reminds us. Economic exclusion, the dignity of refugees and climate change that disproportionately hurts the poor are also life issues," he said in an email.

Social Service Sr. Simone Campbell, executive director of the NETWORK social justice lobby, criticized the letter as "nothing more than a political ploy, and it won't fool anyone."

Since Trump’s campaign began, the businessman has at various times advocated banning all Muslim immigrants from entering the U.S., and has referred to some Mexicans coming into the country as criminals and rapists. At other points, he has mocked a reporter with a disability and insulted numerous women; The Washington Post reported Friday on video from 2005 showing the candidate bragging about groping women.

Campbell added that more and more Catholics consider a broad range of issues -- among them, economic inequality, immigration, hunger -- and less and less vote based on a single issue.

While polling shows several of the issues Trump outlined as important for Catholics in determining their vote, few rank among their chief priorities.

A survey conducted in June by Pew Research Center shows Catholics mostly in line with the rest of the country, prioritizing the economy, terrorism, health care and foreign policy when determining how to cast their presidential vote; Catholics, however, place immigration as a higher concern than the general public.

"Trump has dug himself into a deep hole with Catholic voters, and I doubt this effort helps him climb out," Gehring said.

Trump's letter to Catholics is the latest effort to appeal to Catholic voters.

While conservative Catholics spoke out strongly against his candidacy during the primary season -- including a March letter from nearly 40 leading voices that labeled him "manifestly unfit to be president of the United States" -- some have softened that stance. In late September, the Trump campaign named a 33-member Catholic advisory council, with its liaison Joseph Cella one of the March letter signatories.

CatholicVote.org, a conservative political group, in early September pulled back from their "Not. Trump." stance, still withholding an official endorsement but saying Catholics "in good conscience" can vote for him.

The letter to Catholics from Trump began with his disappointment in not being able to attend the 18th annual Catholic Leadership Conference (Oct. 4-6), which is a private event for heads of national Catholic organizations, including Eternal World Television, Fellowship of Catholic University Students, Catholic Scripture Study International and Priests for Life. The conference listed as speakers two members of his Catholic advisory council: Fr. Frank Pavone, national director of Priests for Life, and Austin Ruse, president of the Center for Family and Human Rights, who was unable to attend at the last moment.

Gail Buckley, president of the conference's board of directors and founder of Catholic Scripture Study International, told NCR that the conference sent invites to both candidates -- the first time it had done so. In recent years, former Pennsylvania Sen. Rick Santorum and presidential hopeful had addressed the conference, including during 2012 primaries.

She said it heard from the Clinton camp just before the conference that she was unable to attend. The Trump campaign "responded immediately," Buckley said, but ultimately were unable to work the event into his schedule, opting to send the letter in his place.

"Someone suggested to me that because of the power of the heads of Catholic organizations that were attending this conference, that we should have the candidates come and speak," Buckley said.

As for her vote, she said will could never support Clinton because she doesn't represent her values as a Catholic, and she believes Trump and running mate Mike Pence will fight for religious liberty and uphold their pro-life stances.

"I have to hang my hat on that, and hope for the best," Buckley said. "And pray."

The Republican candidate spoke highly of Denver Archbishop Samuel Aquila, who also spoke at the conference, and his predecessor, Archbishop Charles Chaput, now of Philadelphia, calling their leadership "exemplary."

In an online column for his archdiocesan newspaper's website, Aquila shared the story of a recent dinner conversation that turned to the presidential election. He told his dining company of his "aversion" to both candidates, saying they "are disliked, lack credibility, and have made comments that make the hair on the back of your neck stand up."

Aquila advised Catholics to first look at how their conscience is formed -- by Jesus and the church, or a political ideology? -- and to carefully reflect on both party platforms with emphasis toward human life issues. The archbishop, too, singled out the contraception mandate, along with the call for repealing the Hyde Amendment, which prevents federal funding for abortion, that's part of the Democratic platform -- what he said is "aggressively pro-abortion, not only in funding matters, but in the appointment of only those judges who will support abortion."

"Conversely," he continued, "the Republican party platform is supportive of the Hyde Amendment and just this year strengthened its support for life by calling for the defunding of Planned Parenthood, banning dismemberment abortion and opposing assisted suicide."

The health of the nation, Aquila said, "depends on a deep respect for human life," from conception until natural death, and its future depends on its protection.

"If we don't, eventually we will go the way of Rome and Greece and other great civilizations that have risen and fallen," he said.

Politics | Trump's pledge to Catholics: 'I'll be there for you'