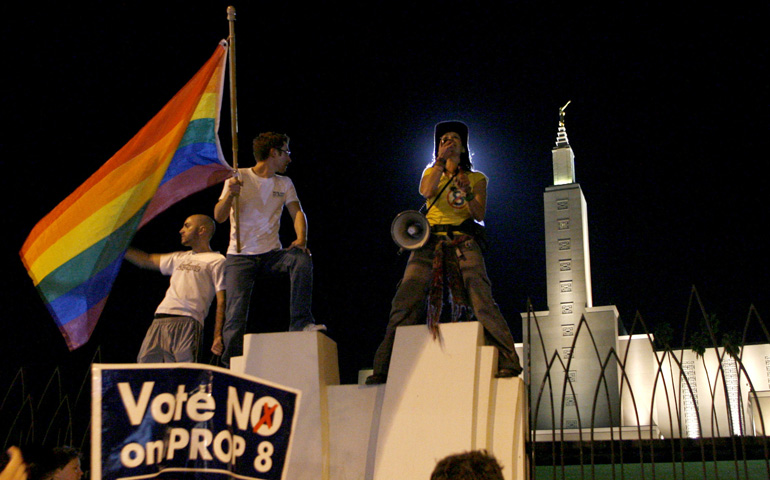 Robert Oliver holds a rainbow colored flag as a woman talks to a crowd outside the Los Angeles California Temple of the Church of Jesus Christ of Latter-day Saints during a "No on Prop 8" march and rally in 2008, two days after Californians approved Proposition 8. The measure defines marriage as the union between one man and one woman.(CNS/Reuters/Danny Moloshok)

Houston lawyer Mitchell Katine came to the Supreme Court 10 years ago for the final chapter of Lawrence v. Texas, the landmark gay rights case in which the justices struck down state sodomy laws.

Neither Katine nor the other lawyers working for John Lawrence and Tyron Garner in their battle against Texas' sodomy law imagined the length and breadth of Justice Anthony Kennedy's majority decision, which struck down all remaining state sodomy laws.

As the Supreme Court prepares to issue two historic decisions on gay marriage this month, however, the judges and lawyers who worked on both sides of those earlier cases don't expect anything quite so eloquent or all-encompassing from a cautious and conservative court.

The consensus view: The justices will limit the expansion of gay marriage rights to California, with few if any implications for the rest of the country. Only on the Defense of Marriage Act, most agree, will the court strike a broad blow against discrimination by striking down the ban on federal benefits for married same-sex couples.

"It will really move us forward without going all the way," Katine predicts, lamenting that Lawrence and Garner did not live to witness the moment. "I really wish they had not died and could see the true fruits of their labor."

Houston attorney Gary Polland was on the other side of the issue in Lawrence. As chairman of the Harris County Republican Party, he backed the anti-sodomy statute and encouraged the state to prosecute the case. And while Katine celebrated Kennedy's sweeping declaration of homosexual rights on June 26, 2003, Polland criticized what he saw as "legislating courts."

Still, Polland said he won't be surprised or angry if the high court does what Katine expects in the two same-sex marriage cases this month. The federal government had no business getting involved in family law in 1996 by defining which married couples could receive federal benefits, he said. And unlike 2003, he said, the Supreme Court would be right to limit its ruling on California's gay marriage ban to that state only.

"I think it's going to be an incremental move, whatever it is," Polland said. "This court doesn't want to be in the position of making political decisions for the country."

The guessing game on the same-sex marriage cases is a complex one, due not only to their nature but the wide array of choices facing the justices.

In Hollingsworth v. Perry, pitting backers of California's gay marriage ban against two couples who want to marry, the ruling conceivably could affect just those two couples -- or the entire country. The justices could rule broadly or narrowly on the merits of the case, or they could decide it doesn't belong before them and send it back.

Several potential decisions would have the same effect, however: Gays and lesbians in California could marry, as two lower federal courts said they could. That result, veterans of past gay rights cases say, offers the court a reasonable middle ground.

"Anything that avoids giving momentum to either side in this highly debatable and intensive social debate that's going on throughout the country would be the route, I think, that would guide them," said John Greaney, a law professor at Suffolk University Law School in Boston, who served on Massachusetts' Supreme Judicial Court and voted with the majority in the 2003 Goodridge v. Department of Public Health case that legalized gay marriage. To get five votes on the Supreme Court, he said, "you have to tailor it as narrowly as possible."

Opponents of same-sex marriage who have been on the losing side of cases dating back to Romer v. Evans -- the 1996 case in which the Supreme Court ruled that Colorado voters could not rescind local laws banning discrimination against gays -- take solace in the likelihood that the court won't extend gay marriage rights nationwide.

They cite several reasons for a go-slow approach: Chief Justice John Roberts' preference for narrow rulings. Justice Ruth Bader Ginsburg's criticism of the 1973 Roe v. Wade abortion decision for going too far and setting off recriminations from abortion opponents. The continuing debate that has led a dozen states to approve gay marriage and three dozen others to ban it.

"I think there's a better chance of the people of California winning it all than there is of the country being placed under a constitutional regime requiring the creation of gay marriage," said Teresa Collett, a professor at the University of St. Thomas School of Law in Minnesota, who filed an amicus brief in support of Texas' sodomy ban a decade ago.

One particularly popular prediction: The high court will decide that the ban's supporters lack the legal right to appeal the lower court rulings, given they do not represent the state government.

"It would be surprising if the court reaches a decision about Proposition 8's constitutionality, because long-standing case law indicates that Proposition 8's sponsors do not have standing," said Suzanne Goldberg, a Columbia University law professor who represented those challenging the Colorado referendum in Romer and the Texas statute in Lawrence.

Walter Dellinger, a former U.S. acting solicitor general who filed a brief against Texas in 2003, notes the justices referred often during oral arguments to his Proposition 8 brief, which contends that the ban's supporters have no fiduciary duty to the state of California and could not appeal on the state's behalf.

Paul Smith, the lead attorney representing Lawrence before the Supreme Court a decade ago, said the decision may be several different opinions that add up to a plurality. "There's going to be at least two opinions," he predicts. "There may be five."

If the Proposition 8 decision is destined to be limited, these litigators say, the ruling on the Defense of Marriage Act in United States v. Windsor is more likely to be a broad one denying its constitutionality.

Among the reasons: Even though the Obama administration isn't defending the federal law, which creates another issue of legal standing, it continues to enforce it. As a result, Edie Windsor, the lesbian widow challenging the law in New York, is out $363,000 in estate taxes.

In addition, gay marriage proponents and opponents agree, the court probably won't want to decide both cases on narrow, procedural grounds. "I think there will be enormous pressure to decide the DOMA case on merits grounds," Goldberg said.

But both sides also predict that while striking down DOMA, the justices won't go so far as to grant gays and lesbians the additional legal protection accorded women and African-Americans known as "heightened scrutiny." That would set a precedent that could be applied in other cases.

"That might open up a plethora of additional lawsuits," said Greaney, the retired Massachusetts judge. "It would give the gay rights folks tremendous leverage going forward in all areas. The court probably would not want that."

Judging from Kennedy's questions during oral arguments in March, they say, a narrow majority of justices could decide the case on grounds of federalism, or states' rights, rather than on broader grounds of due process or equal protection.

Said Polland, the former GOP county chairman: "The federal government doesn't have any jurisdiction in the family law field."