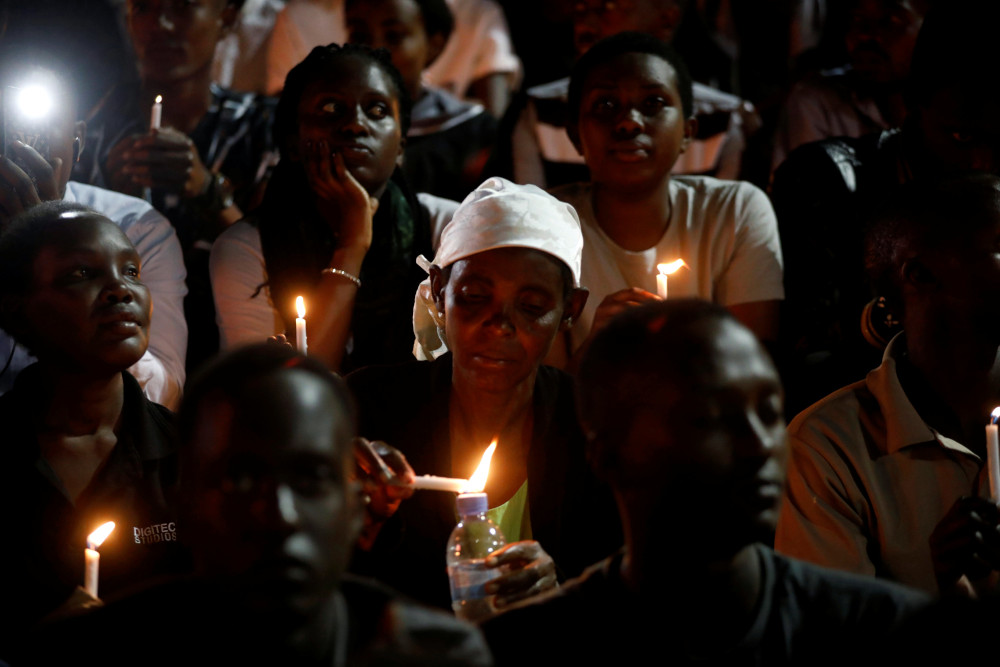 A woman lights a candle during a vigil marking the 25th anniversary of the Rwandan genocide at Amahoro stadium in Kigali, Rwanda, April 7, 2019. (CNS/Reuters/Baz Ratner)

Rwanda's Catholic bishops apologized for urging the release of some prisoners convicted for roles in the 1994 genocide, saying they realized by the reaction that they had caused much hurt.

The statement followed criticism of a pastoral letter that called for the release of old and ill convicts serving sentences for the mass killings.

"We wrote to Christians, encouraging them to continue promoting unity and reconciliation, while also seeking forgiveness," the bishops said in a Swahili-language statement in mid-April.

"This letter caused a lot of hurt, especially for what we requested on behalf of the elderly and sickest who are still in prison for the crime of genocide. We are saddened it offended people – this was not what we intended."

The bishops said they especially regretted their appeal had caused anguish "at a great moment of mourning" and pledged the Catholic Church would continue supporting genocide survivors and those safeguarding the memory of victims.

More than 800,000 people, mostly from Rwanda's Tutsi minority, were massacred from April to July 1994 with the connivance of the national army, police and Hutu tribal militias.

The anniversary was marked April 7 at the Genocide Memorial Center in the Rwandan capital, Kigali, at a commemoration attended by President Paul Kagame and leaders from Africa and the European Union.

"After this tragedy of genocide against the Tutsis, the light of the Lord's resurrection was not quenched – asking and giving forgiveness can become a means of building a tomorrow for everyone," the bishops said.

"There are genocide survivors and those close to them, especially widows and orphans, whom we must help bear the pain and accompany on a journey of self-reliance. There are also those imprisoned for genocide against Tutsi, including the elderly and those with illnesses. These persons should also be assisted."

France's La Croix daily said the bishops' appeal had been criticized by victim groups and politicians in Rwanda, including Justice Minister Johnston Busingye, who said in a statement the church had no "moral authority" to demand a general pardon and "should first work on its own history and connections with the genocide regime."

The Catholic Church – which includes the Kigali Archdiocese and eight dioceses – makes up around half the 12.2 million population of Rwanda, where at least a dozen clergy were indicted for the genocide by an International Criminal Tribunal.