The Second Vatican Council has already made us free 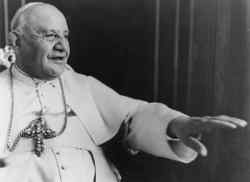 Pope John XXIII is pictured in this undated photo. Oct. 11 will mark the 50th anniversary of the first session of the Second Vatican Council, which was called by Pope John XXIII. (CNS photo/courtesy of Archbishop Loris Capovilla)

Over the weekend, an editor on the Internet observed that many events this year commemorating the 50th anniversary of the Second Vatican Council "seem to be wakes, lamenting and grieving over the lost opportunity."

Rather than wring our hands over what the church has become under back-to-back popes who have acted in an arrogant and authoritarian manner, we should celebrate what Vatican II has already done for us.

It has given us a new view of ourselves. It's made us more free, more human and more at the service of a world that Jesus loved.

It has given us a new view of the church. It's our church, not the pope's church, or the bishops' church, or a priest's church.

It has given us a new view of our place in it. We can think, we can speak, we can act as followers of Jesus in a world that needs us.

Rather than whine over what daddy won't let us do, we can put the Council into play ourselves.

American nuns showed us how.

In 1979, Mercy Sr. Theresa Kane, then the president of the Leadership Conference of Women Religious, told Pope John Paul II the church ought to be ordaining women. Doing that, she implied, the church could break the stained-glass ceiling and give first-class citizenship to half of its membership, the women in the church.

The pope put her down with a scripted lesson from history that was not history. He said U.S. nuns should model themselves on the Blessed Virgin Mary, "who was never a part of the hierarchy, but made all hierarchy possible because she gave to the world the shepherd and bishop of our souls."

The pope wouldn't let Kane give him the answer he deserved -- that in Mary's time, there was no such thing as a hierarchy, and that Jesus was not a bishop. He wasn't even a priest.

Instead of turning tail, Kane and many U.S. nuns went ahead and continued to do what the Council had told them to do: "Update, renew, go back to your sources." They became more free, more human and more at the service of the world.

They were always teachers. Now they became scholars and theologians, chief executives of hospitals, legal aid lawyers, and social workers and martyrs in countries like El Salvador. They took on issues -- peace, economic injustice, racism, women's rights, interfaith relations and environmentalism -- that put them in collegial working relationships with bishops also pushing those causes.

Now Pope Benedict XVI has dissed them for doing that. Too much emphasis, he has said, on feeding the hungry, clothing the naked and finding shelter for the homeless. Why don't the sisters help the bishops speak out on core faith issues like birth control and abortion?

We shall soon see the sisters' answer to that question. They will say the pope can't force them to talk nonsense, and he can't stop them from feeding the hungry, clothing the naked and finding shelter for the homeless.

He can't stop us, either. There's no suppressing of the spirit of Vatican II. John W. O'Malley, a Jesuit historian of the Council, has epitomized it for us. The Council moved us to a new vision of the church:

... from commands to invitations, from laws to ideals, from definition to mystery, from threats to persuasion, from coercion to conscience, from monologue to dialogue, from ruling to service, from withdrawn to integrated, from vertical to horizontal, from exclusion to inclusion, from hostility to friendship, from rivalry to partnership, from suspicion to trust, from static to ongoing, from passive acceptance to active engagement, from fault finding to appreciation, from prescriptive to principled, from behavior modification to inner appropriation.

We can put the spirit of the Council into play in our own little part of the universe. We don't have to seize moral leadership from our bishops. They have already lost it with 90 percent of us by covering up for their wayward priests.

With the cogency of our arguments, we can further marginalize our bishops every time they misinform the people and the press about "the Catholic position" on moral issues that are beyond their competence. (The bishops try to confuse us by telling us that moral and political questions are "faith issues." The reasonableness of family planning is a moral issue, and therefore something we come to by reason, not faith. The ordination of women -- well, if we understand politics as an answer to the question, "Who's in charge here?" then that's a political issue.)

We can continue to seek justice with our brothers and sisters across the whole religion landscape (and break bread with them, too).

We can continue to applaud our scholars and theologians and when they give us a take on the Gospel in words that we, our children and grandchildren can understand.

When we find ourselves in backward-thinking parishes, we can start up our own small-faith Eucharistic communities. When enough of us start doing that, the bishops will begin to understand. They need us more than we need them.

[Robert Blair Kaiser, who covered Vatican II for TIME magazine, is the author of five books on the Council. He will be doing an international lecture tour on the council starting in the fall.]

NCR will be reporting on the LCWR assembly all week. Previous reports:

The Second Vatican Council has already made us free