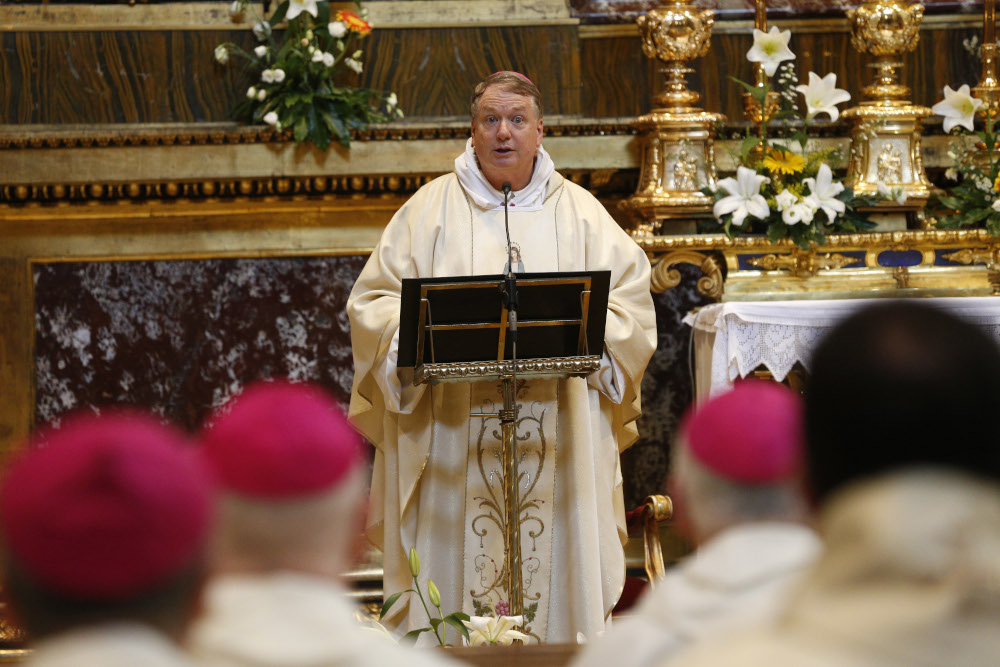 Archbishop Anthony Fisher of Sydney gives the homily as Australian bishops concelebrate Mass at the Basilica of St. Mary Major in Rome June 25, 2019. The Australian government is preparing to introduce the country's first religious freedom laws, but senior Catholic clerics are concerned they may not go far enough. (CNS photo/Paul Haring)

The Australian government is preparing to introduce the country's first religious freedom laws, but some senior Catholic clerics are concerned they may not go far enough.

A still-confidential package for the legislation was approved by some Cabinet members in the capital, Canberra, Aug. 20, with Attorney General Christian Porter indicating that there needed to be more "tweaks."

Observers said these are likely to involve intense backroom discussions with more conservative members of the Liberal/National Party government who, like the church, have publicly stated their concerns that the laws will not be sufficient.

"We are in favor of some (sort of) religious discrimination act, but it is important that it is a positive law, one not about exemption," Melbourne Archbishop Peter Comensoli told the national daily The Australian.

"We have signed up to a number of international covenants in terms of religious freedom as a basic human right. We are keen to see some way in which that might be legislated."

A draft of the bill — which aims to mirror existing anti-discrimination laws covering race, age and disability — is expected to be released in the coming weeks, following further consultation. The Senate, where the government does not have a majority and relies on the support of independents and small parties, also will hold its own inquiry once the draft is released.

"I am close to finalizing a draft bill. There is some fine-tuning now being conducted, and I expect a draft bill would be released in the next few weeks, before Parliament resumes in September," Porter said.

Sydney Archbishop Anthony Fisher, who has emerged as the Australian church's leading conservative voice, also has voiced concerns that the laws will not be sufficient.

Porter met with Fisher in early July after the prelate criticized the lack of consultation with religious groups and claimed the government was rushing the bill.

Prime Minister Scott Morrison, Australia's first leader who is a practicing evangelical Christian, met with a group of 21 religious leaders earlier in August. His two predecessors, Malcolm Turnbull and Tony Abbott, are both Catholics.

A key criticism from some religious groups is that the legislation would not give businesses or people the right to discriminate against certain groups of people — such as gay or transgender people — if dealing with such groups were contrary to their religious beliefs.

"What we aim to deliver was rightly described by Anglican Public Affairs Commission chairwoman Carolyn Tan today as being a 'shield' against discrimination, and not a 'sword,'" Porter said. "The laws will protect people from being discriminated against, but will not give them a license to discriminate against other people."

Support for the new laws emerged from the government and religious groups during the bitter debate over same-sex marriage in Australia during 2017. The government, then led by Turnbull, who was replaced by Morrison in August 2018, was forced to compromise with its significant conservative faction.

Instead of a straight parliamentary vote on same-sex marriage, the government held a nonbinding mail-in plebiscite, which eventually led to legalization. In tandem, former Attorney General and Immigration Minister Philip Ruddock was commissioned to lead an expert panel on religious discrimination, which reported back to the government in May 2018.

"The expert panel concluded that there is an opportunity to further protect, and better promote the right to freedom of religion under Australian law and in the public sphere," the government at the time said.

The panel’s report made 20 recommendations to enhance the protection of the right to freedom of religion in Australia, both through legislative amendments to national, state and territorial legislation, and through non-legislative measures.

In addition to the new laws, the Australian Law Reform Commission is in the process of inquiring into religious exemptions to existing discrimination laws. This is to make sure existing legislative exemptions to discrimination based on a person's identity were limited or removed, while protecting the right of religious groups to operate "consistent with their religious ethos," such as separating men and women or the wearing of traditional vestments.

Despite all the noise about the legislation, increasing numbers of Australians are not religious. In the latest national census taken in 2016, nearly a third of Australians — 30% — reported they had no religion.