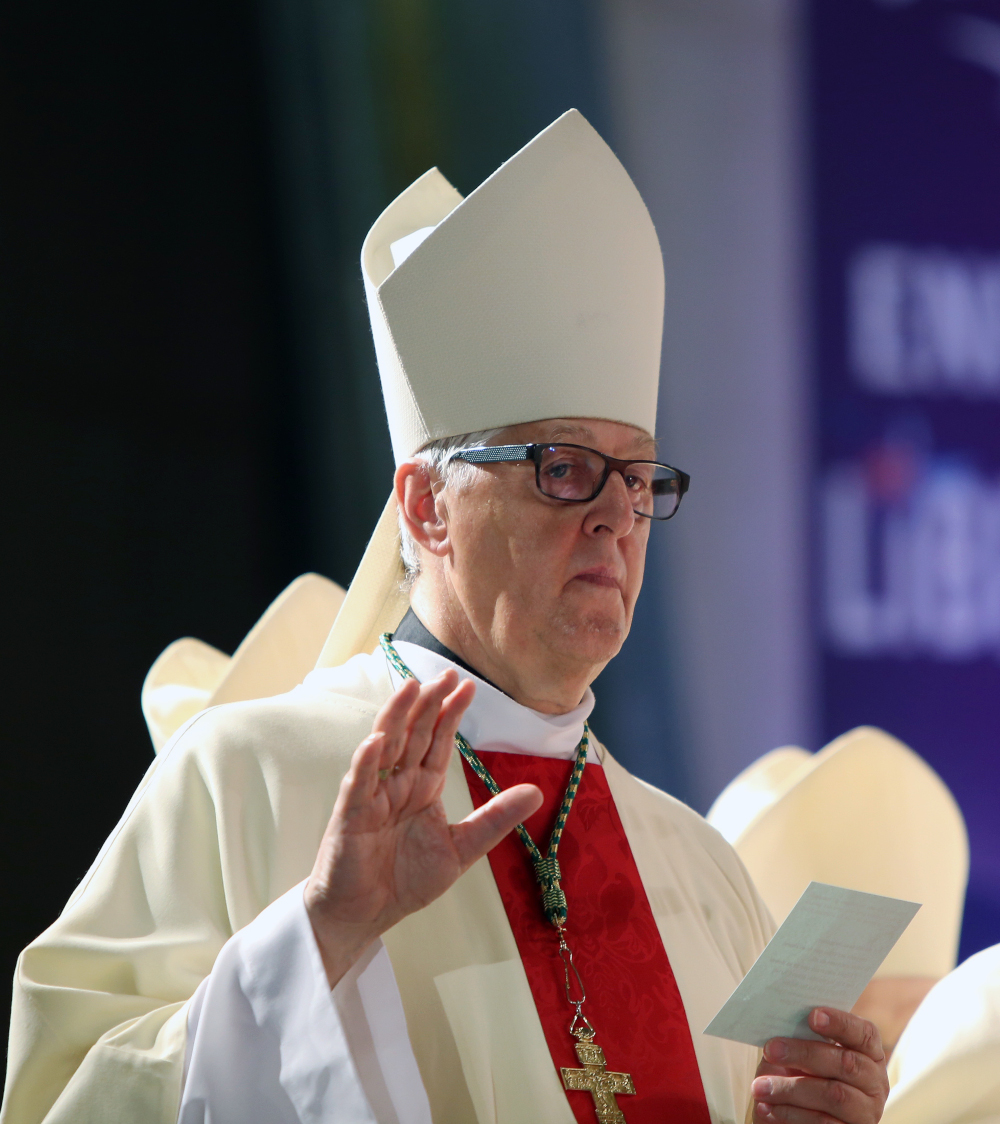 Canadian Bishop Noel Simard of Valleyfield, Quebec, president of the Assembly of Catholic Bishops of Quebec, said the main Quebec organizer for the May 9, 2019, National March for Life in Ottawa went too far in accusing Pope Francis of heresy. Bishop Simard is pictured in a July 22, 2018, photo. (CNS/Presence/Philippe Vaillancourt)

Some Quebec bishops have expressed discomfort that the main Quebec organizer for the May 9 National March for Life in Ottawa signed a letter accusing Pope Francis of heresy.

Bishop Noel Simard, president of the Assembly of Catholic Bishops of Quebec, did not mince his words May 6 about the anti-pope letter signed by the president of Campagne Quebec-Vie, the province's main Catholic pro-life group.

"I used to send a check to Campagne Quebec-Vie every year. But now it's over," said Simard, a bioethics specialist, who added he was only speaking on his behalf and not for his fellow bishops.

"Attacking Pope Francis this way is going far too far," he said about the letter signed by 19 Catholics from different countries. Only one Canadian initially signed this letter: Georges Buscemi, who has been in charge of Campagne Quebec-Vie since 2009.

Buscemi and the other signatories, including theologians and religious, asked bishops and cardinals to accuse Francis of the "canonical offense of heresy" and to take the necessary measures against him.

On May 3, the Canadian Conference of Catholic Bishops sent a press release promoting the annual National March for Life. However, in doing so, it posted links directly to Campagne Quebec-Vie's website, where Buscemi invited citizens to "defend without shame the right to life for all human beings."

On May 9, the bishops posted a new statement that began: "The Canadian Conference of Catholic Bishops (CCCB), in profound unison with Pope Francis, affirms that all human life should be respected and protected from the moment of conception until natural death."

"This whole situation is very delicate," said Simard, who heads the Diocese of Valleyfield and regularly attended the march as chaplain for the Knights of Columbus. He was unable to march this year, but other Catholic bishops were expected to attend.

Simard remains convinced that the March for Life remains relevant. However, he said, "the problem is when one of the organizers takes unacceptable positions, in this case against the pope. It certainly makes allegiance more difficult."

"It must be addressed," he added, but "we mustn't reject everything because of a stance we don't agree with."

On May 5, Archbishop Christian Lepine of Montreal reacted by saying that the march's goal is unchanged: "The idea of respect for life, or promoting life: atheists do it, Jews do it, Christians do it. ... So I keep the focus on it," he said, suggesting that people with different ideas can still commit to the same cause. "The call to respect life is beyond that."

In Quebec City, Jasmin Lemieux-Lefebvre, director of communications for the Archdiocese of Quebec, said May 6 that Cardinal Gerald Lacroix did not want to comment on the situation.

The website of the Archdiocese of Quebec invited Catholics to participate in the National March for Life.

However, the archdiocesan spokesman said: "We would like to share our deep disappointment that the president of the main Quebec organization supporting the march may have even thought of supporting a letter accusing Pope Francis of heresy."

Lemieux-Lefebvre said he personally contacted Buscemi "to let him know that by signing this letter, he was endangering the credibility of the National March for Life."

"The dozens of people who take advantage of Quebec City transportation to participate in the National March for Life have nothing to do with this blatant lack of discernment," he added.

"We always believe in the importance of publicly bear witness to the dignity of human life, from conception to natural death, but let us be clear: We don't want to be associated with anyone who unfairly accuses the Holy Father," said Cardinal Lacroix's spokesman. "Our communion with Pope Francis is complete."

Buscemi said he is well aware that signing a letter accusing Francis of heresy could well offend Catholics and bishops.

"But the resolution of the crisis in the church is more important," he said. "The church is responsible for teaching true faith and true morality to every human person. When its leader fails, the whole planet suffers, not only Catholics or pro-life."