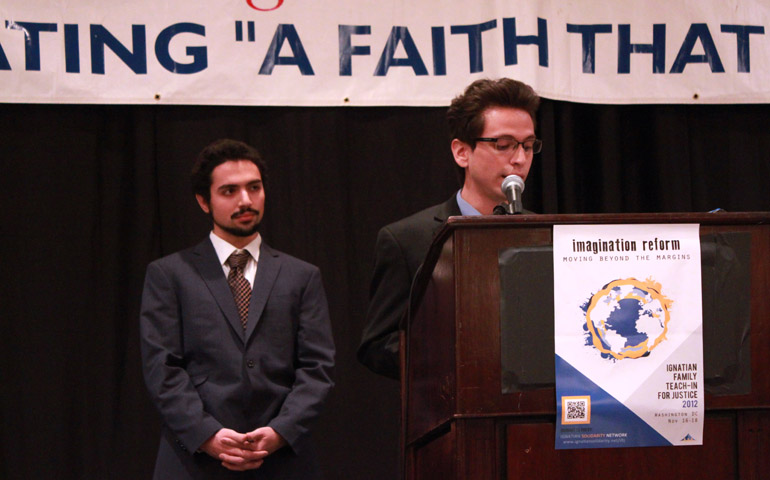 The Ignatian Solidarity Network began in 1998 with a tent at the School of the Americas protest in Fort Benning, Ga., to offer a space for prayer, education and community as an Ignatian family. Three years ago, the teach-in moved to Washington, D.C., allowing for a legislative advocacy component on Capitol Hill. This year, participants came from more than 50 Jesuit institutions in at least 20 states.

The conference, "Imagination Reform: Moving Beyond the Margins," offered four keynote speeches, beginning with Social Service Sr. Simone Campbell, an advocate, lawyer and a leader of the Nuns on the Bus tour. Campbell, the executive director of NETWORK, a Catholic social justice lobby, focused on immigration reform. Other keynote speakers were were Gabriel Bol Deng, a former Lost Boy of Sudan and founding director of Hope for Ariang; Jesuit Fr. Fred Kammer, director of the Jesuit Social Research Institute at Loyola University, New Orleans and former president of Catholic Charities USA; and Merlys Mosquera Chamat, regional director of Jesuit Refugee Services in Latin America and the Caribbean.

The Ignatian Family Teach-In is the largest Catholic youth and young adult social justice gathering in the country. A dozen high school and university students were chosen to address the assembly on topics such as an anti-sweatshop movement, interfaith dialogue and a tutoring program for children of facility management employees.

Brophy College Preparatory students Cesar Lopez and Peter Haenel spoke of their experience offering educational sessions for community members in Arizona who would be impacted by the DREAM Act. Felicia Carter and Vail Kohnert-Yount of St. Joseph's and Georgetown universities, respectively, presented on "The Jesuit Just Employment Project," to which 20 of the attending Jesuit universities are committed. Rather than recognizing and criticizing a distant community's injustice, the students who took the main stage sought to improve their own Jesuit institutions.

Advocacy education took on several forms over the course of the weekend. Saturday afternoon, Patty Blum led one of the more than 50 breakout sessions, giving attendees an update on the 1989 assassination of six Jesuit priests and their companions in El Salvador. (One of the 20 men said to be involved with the deaths will be in court Dec. 18 in Boston, charged with six counts of immigration fraud.) On the evening of Nov. 17, a public witness was held at Lower Senate Park to shed light on the importance of legislative advocacy. Education on domestic poverty, humane immigration reform and sustainable environmental practices will continue at the Jesuit institutions leading up to the Ignatian Family Advocacy Month in February.

Throughout the weekend, Christopher Kerr, executive director of the Ignatian Solidarity Network, invited those gathered to say and repeat, "I am a member of the Ignatian family." Throughout the weekend, we paused for prayer or had musical interludes, singing "We Are Prophets." That Saturday morning, we began with a prayer service highlighting lay leaders in our midst, including a man who has taught for more than 20 years at a Jesuit high school, a young woman who is a campus minster, and Elba Ramos, who died with the six Jesuit priests. Through this service and many experiences throughout the weekend, we were asked to reimagine our margins. Students reflected on creative ways social justice ideals take root within their Jesuit institutions. Students, lay leaders and religious came to know their place in the Ignatian family and the dignity, empowerment and responsibility that flow from that relationship.

Sometimes the reformation needed is recognizing our own place within the margins. Realizing my place in the Ignatian family gives me a sense of belonging, but also responsibility and empowerment.