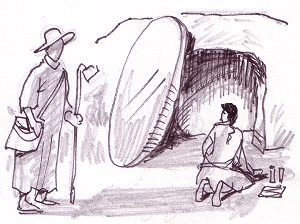 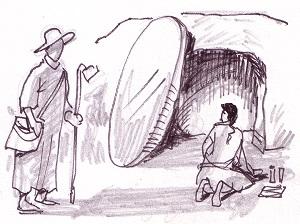 The recent appointment of three women to the Vatican office that recommends candidates for the episcopacy highlights the fact that they are qualified to help select people for offices they themselves are not permitted to hold.  Today’s celebration of St. Mary Magdalene, designated by Pope Benedict as the “Apostle to the Apostles,” will again occasion widespread and necessary discussion of that irony.

The story of Mary Magdalene at the tomb is one of the most personal and moving faith accounts in the New Testament, but we should not miss its complex theological message for the early church and for the church today.

John’s Gospel is thought to be the last of the four Gospels and probably composed at the end of the first century. It retells the story of Jesus recorded in the other Gospels but adds a reflective layer that reveals where the early church was some 70 years after the events. It repeats what is by then a solid tradition in the church, that Mary was a key witness to the life, death and resurrection of Jesus, a figure whose faith met resistance and doubt from the Apostles, including Peter.

The appearance story in John 20 is about the gradual coming to faith of the church. Mary comes to the tomb while it is still dark. She sees the open tomb, but still does not see (believe) its significance. She goes and gets Peter and the Beloved Disciple, and they return to the empty tomb. Mary’s belief at this point is exactly what early critics of the church had said about the resurrection -- Someone removed the dead body.

The two Apostles depart and Mary remains, weeping at the tomb. Her encounter with the risen Christ happens in stages. She sees two angels (messengers) inside the tomb who ask her why she is weeping. She says, “They have taken my Lord, and I don’t know where they laid him.”

She mistakes Jesus for the gardener as he also asks her why she is weeping and what she is looking for. It is only when Jesus says her name, “Mary,” that the truth dawns on her fully. Jesus has risen from the dead.

The richness of the story means that many truths can be found in it. For women in the church, the question, “Why are you weeping?” has taken on important, even political, dimensions. The exclusion of women from ordained leadership and official preaching roles in the church remains a scandal to many who hold we have been impoverished by the official failure to accept the witness of the Scriptures to the role of women in the life of Jesus.

For all of us, the key question has to do with our Easter faith. Without our own encounter with the risen Christ, personally and in our faith communities, our Christian discipleship is still incomplete, our faith still in the darkness before dawn.

Mary was baptized by her own tears at the tomb, where she came because of her love for Jesus.  Because of her persistence, her eyes were opened, and she was granted intimate knowledge of the mystery of Jesus. She is the Apostle to the Apostles. She is the patroness of our own journey toward deeper faith.