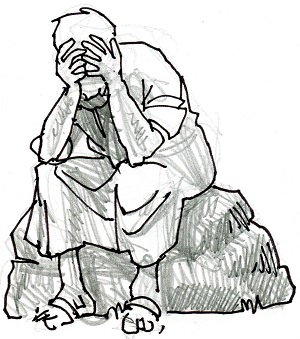 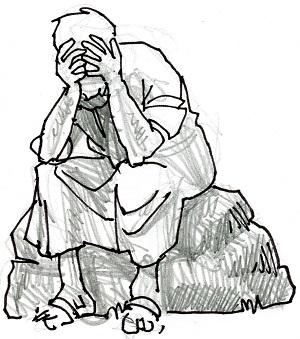 Romantic love culminates in overcoming shyness and self-doubt to say the magic words, “I love you.”  In the movies this scene gets the best music as the couple falls into each other’s arms and life moves toward happily ever after.

Real love is what happens after people say the words.  Love in action is the measure of commitment, why weddings perhaps should refrain from touting love until it is a proven fact, say 25 years later, when the couple can declare themselves truly married and the church can give their union sacramental status, a sign that they are witnesses to God’s everlasting nuptial covenant with his chosen people. Until then, most marriages are works in progress.

Jesus and Peter are reconciled after his triple denial in the only way that human reconciliation can be complete.  In their excruciating dialogue, Peter relives the night he stood around a fire in the courtyard of the high priest and denied that he even knew Jesus. His shame seared into his heart the meaning of mercy, the Gospel he was to preach to the world.  But before that, he needed to say, “You know that I love you” for each “I don’t even know you.”

But it was not enough. After each protestation of love, Peter was told how he could prove that love. If he really loved Jesus, he was to care for the flock Jesus was entrusting to him: “Feed my lambs; tend my sheep; feed my sheep.” Peter would redeem his denial of Jesus by imitating him as Good Shepherd, even to the point of laying down his life for the sheep.

The story ends with the suggestion that Peter did die like his Master. He was led to the cross and, as tradition claims, he died crucified upside down, proud, upright Peter turned topsy turvy to prepare him to be an example for the church. Real love, not love in dreams, was his final gift. Failure and forgiveness revealed mercy as the heart of the Gospel he preached.