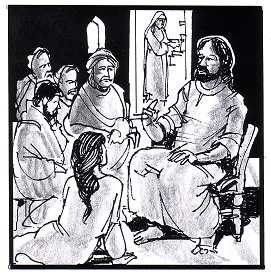 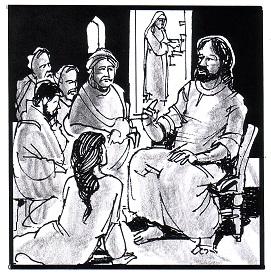 “You are anxious and worried about many things. There is need of only one thing” (Luke 10:41).

Hospitality appears at first to be the lesson in both the story of Abraham and his guests (Gen 18:1-10) and the story of Martha and Mary welcoming Jesus (Luke 10:38-42). In both accounts, the arrival of guests occasions the preparation of a meal. Readers know, of course, that something much more important is happening.

The three men standing near Abraham’s tent are angels, messengers of God, and their purpose is to deliver the long-waited news that Abraham and Sarah are going to have a son. God’s promise of progeny, a genealogy that will reach to the ends of the earth, will begin with Isaac, despite the fact that both parents are old and Sarah is well beyond her childbearing years. The exquisite meal Abraham and his servants prepared, a sign of openness and hospitality, recedes into the background because this is a divine visitation with enormous implications.

When Jesus arrived at Martha’s door, she burst into action to fulfill the same social and religious obligation Abraham obeyed when he prepared a feast for his guests. In most cultures hospitality equals food. It is the one thing necessary.

Mary also welcomes Jesus, but in a more exquisite and insightful way. Her hospitality was first an open heart. She embraces him in her eagerness to listen to every word that fell from his lips. She positioned herself close to him as did the “beloved disciple” at the Last Supper, when he placed his head near Jesus’ heart. Mary also recognized that this was a divine visitation, because Jesus was no less than the Word of God.

This familiar story has often been explained as putting contemplation above action, and perhaps this is one theme. But in most biblical stories involving two options or two players -- Cain and Abel, Ishmael and Isaac, Esau and Jacob, or Jesus’ story about two sons and their prodigal father, the ultimate desire of God is to bring both together, to replace competition with love.

Jesus loves both Martha and Mary, and he blesses them both even as he acknowledges Mary’s decision to make him the one thing necessary. The first sign of welcome that every guest needs even before everyone sits down to eat is a place in the heart.  Without that intimate hospitality, every other sign of respect is only protocol, as was the case in some of the lavish meals Jesus was invited to by hosts, like Simon the Pharisee, who only wanted to quiz him for heresy. At that meal, it was only the woman who wept over him, anointed his feet with perfume and dried them with her hair, who really welcomed him.

This was the hospitality Mary gave to Jesus by sitting at his feet and listening to him when he came to the house of Martha and Mary. It was not what she had to give Jesus but what she received from him. Paul calls it the “Mystery hidden from ages and from generations past … It is Christ in you, the hope for glory.” Mary, like Sarah, was invited to share the unfolding plan of salvation, the future of the world.