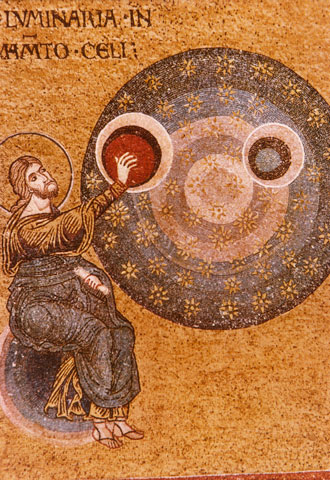 “The Creation of Heaven and Earth from the Chaos,” from the mosaics of the Monreale Cathedral in Italy (Newscom/akg-images)

In an earlier essay for NCR, I described how I, as a male religious priest, have been helped in my ministry by investigating the implications of conscious evolution. I attempted to respond to Cardinal Gerhard Müller's concern expressed to the Leadership Conference of Women Religious in April. Müller, prefect of the Congregation for the Doctrine of the Faith, said: "The fundamental theses of conscious evolution are opposed to Christian revelation and, when taken unreflectively, lead almost necessarily to fundamental errors regarding the omnipotence of God, the incarnation of Christ, the reality of original sin, the necessity of salvation and the definitive nature of the salvific action of Christ."

Something that has helped me see a deeper connection with Christian revelation and conscious evolution came from Karen Armstrong's comparison between what she calls logos (the realm of fact) and mythos (the arena of faith). Mindful of her distinction, I wrote that science involves what is observable; religion reflects what is not observable but is, nonetheless, believable. But when religious leaders equate religion's ancient mythologies with demonstrable facts, faith will suffer, and religion will become increasingly irrelevant.

Since reading Müller's comments, I have wondered if his concern with conscious evolution may rest on a fear that our key Christian mythos of Jesus Christ as universal savior is being called into question. If so, it certainly needs addressing. Along with John's Samaritan woman, I believe that Jesus Christ is the "savior of the world." I believe the universe was and is made through the Word, this Word became flesh in the historical Jesus, and because he proclaimed the "Gospel of the kingdom of God, (which today can be understand to be the "Gospel of the governance of Trinitarian relationships"), he underwent a passion and death through which he evolved in a resurrected form to be embodied mystically in the church.

This belief helps me accept Jesus Christ as the unique savior of the world. But this narrative represents my belief. I will not impose it nor flaunt it. I don't believe that anyone of goodwill and informed conscience who disbelieves it will be outside salvation. In fact, it would do my faith a disservice if I try to interpret this belief, or mythos, as demonstrable in the same way of logos that comes through science.

Having said this, I reaffirm the opening phrases of both the Nicene and Apostles Creed: "I believe in God ... the almighty [i.e., omnipotent], creator of heaven and earth." However, as a theologian, my faith seeking understanding also must be informed by findings from quantum physics, neuroscience and, especially, cosmology. Thus, I will try to address in six points some of the concerns Müller has raised.

First, scientific data show our universe is at least 13.8 billion years old, not the 8,000 to 10,000 years described in the creation narratives and the genealogies of our Scriptures. Furthermore, our universe seems to be ever-expanding. I accept the possibility of multiverses, which some scientists are positing. Whether we have one universe or multiverses does nothing to diminish my belief that God is "the creator of heaven and earth." While I have given up trying to prove the existence of God as logos, I do acknowledge that Thomas Aquinas' proof of the existence of God from causation still makes sense to me intellectually and continues to nurture me.

Science also shows that humankind had its evolutionary origins 40,000-100,000 years ago. Until recently, most scientists and virtually all Judeo-Christian believers thought us to be descendants of a single pair of human beings. But now, findings from the genome indicate that, precisely because of our genetic diversity, we humans cannot have descended from any unique "Adam and Eve." It seems more likely that we evolved from several thousand "first humans."

Again, I find nothing in this possibility that would threaten my belief in the God who created the universe in a way that multiple couples would evolve in their consciousness to realize their unique identity as humans (logos) and almost at the same time become believers in a creative power beyond them they called "God" (mythos). But, since none of them (nor us) has ever seen this God, any discussion about this God will only be made by analogy and, as such, be defined by mythos.

If the second point raises questions about our traditional belief in an "Adam and Eve" with whom God walked in Eden's garden, filled with "preternatural gifts," we still must find a contemporary way to interpret our belief in what Müller calls the "reality" of original sin. The Old Testament world needed scapegoats to blame for its ills. Given this understanding, the Adam/Eve/serpent myth made sense. But now this myth is challenged by the logos of science. As such, it invites us to reinterpret our time-honored myth with a credible understanding of original sin.

Toward this end, it helps me to interpret the "reality" of "original sin" as the "original condition of being human." As creation evolved, those now known as humans wanted to know and be free, but this knowledge and freedom resulted in dynamics of individual, group and social selfishness and sin, suffering and death. Thus, while there may never have been a "Fall," it is consequently clear that humanity, from its origins (arche-), is also alienated from God who makes all beings, including humans, "very good."

Thirdly, if we cannot prove (outside the mythology of our Scriptures) that there was a historical or literal Fall, we nonetheless remain challenged to reinvestigate what we mean by God's economy of salvation. Here, a reclamation of the Franciscan approach can serve us well.

Much of traditional atonement theory and Thomistic interpretation teaches that the ultimate reason for the Incarnation was to have us be "saved from our sins" through the passion, crucifixion and death of Jesus, as though this was God's actual will. However, God (being unconditioned by anything but love) did not need to do anything conditioned by human beings to save us from ourselves and our selfishness and sin.

As John Duns Scotus taught, God has created, redeemed and saved us in Jesus Christ not so much because of what we did (in Adam and Eve) but because of who God is. Because God is love, God so loved the world that God continually invites us to be saved from our own sinful selfishness by embracing the way of love. In his incarnation, passion, death and resurrection, Jesus Christ has shown us that love is the goal of salvation and that God's economy of salvation invites us to consciously evolve, especially as members of the body of Christ, from our sin and selfishness into ever deeper forms of self-giving love.

In one of our eucharistic prayers, we proclaim that Jesus was like us in all things but sin. However, it was not a sin that Jesus' consciousness had not evolved beyond the first-century cosmologically grounded belief in a God defined by a "science" that believed the earth was flat and that heaven was a place ("up there") opposite another place called hell ("down there"). But now the telescope is forcing us to rethink these notions.

This led Pope John Paul II to evolve in his own theological consciousness; in June 1998, this realization led him to ask the head of the Vatican Observatory, Jesuit Fr. George Coyne: "What, if any, are the eschatological implications of contemporary cosmology, especially in light of the vast future of our universe?" That his faith would be secure enough not to be afraid to ask this question also seems clear when he courageously taught in July 1999 that heaven, hell and purgatory are not "places" where we might go but states of being determined by how we live on earth.

Guided by John Paul's evolved theological consciousness, I also believe that the risen Christ ascended into heaven, that Mary was assumed bodily into heaven, and in the "resurrection of the body" and life everlasting. Our evolved consciousness embracing a new cosmology should not make us afraid to ask, with the pope, a parallel theological question: What do these beliefs mean if heaven exists but isn't a place?

My effort to address such a question has led me to rethink images of the kingdom/kindom of heaven proclaimed by the Jesus of the synoptic Gospels, especially Matthew. I have concluded that if I live in love, in mercy, in forgiveness, in compassion, etc., "heaven" will be mine for all eternity when I pass from this place called earth. And if I have freely chosen to alienate myself from God and others in grave ways and die in such a state, God will honor my choice, even if this will be the "hell" of the choices I have freely made.

Lastly, Pope Emeritus Benedict XVI often bemoaned that too many Catholics have remained children in their faith and need to grow up. This is especially important for all of us who are asking questions that come from an awareness of science.

In a similar vein, Sharon Daloz Parks, an expert on faith development, has shown that the contemporary word for "faith" is "meaning." To provide meaning to people being challenged in their Catholic faith, influenced by what science is revealing, should not undermine that faith. Rather, it should challenge us to give evidence that our Catholic faith is supremely meaningful, precisely because it can speak credibly to what science has shown us to be true. This faith will thus not only be "believable"; even more it will offer the evidence of what is not seen but is believed in ways that give hope for a vibrant future for our Catholic church.

[Michael H. Crosby is a Capuchin Franciscan priest living in Milwaukee. His latest book is Repair My House: Becoming a "Kindom" Catholic.]

A version of this story appeared in the Aug 1-14, 2014 print issue under the headline: Belief with no fear of questions.