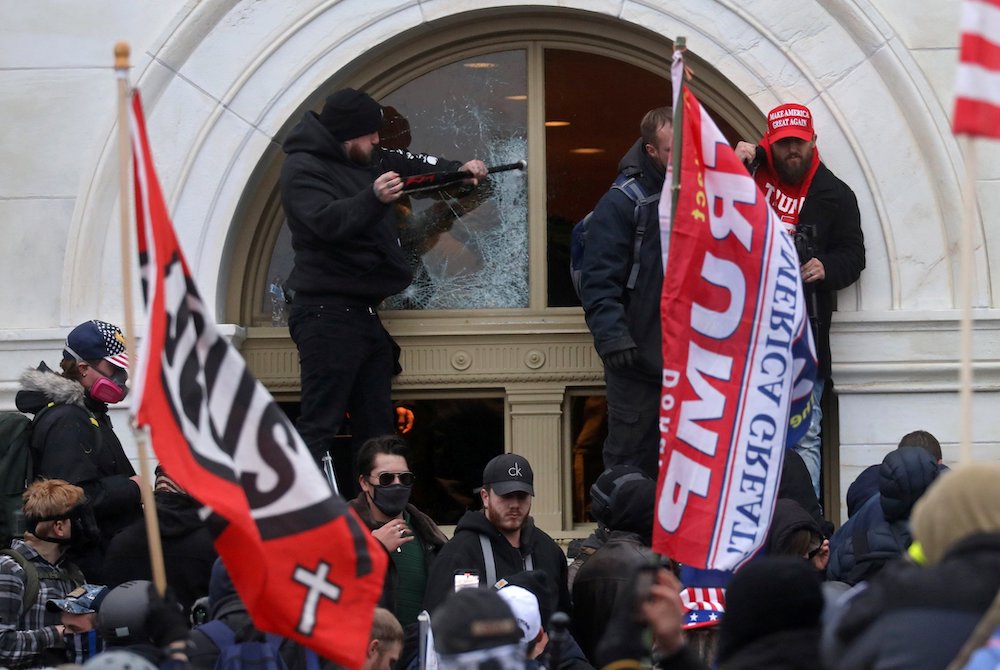 People carry flags with words "Jesus" and "Trump" on them as a President Donald Trump supporter breaks a window at the U.S. Capitol in Washington Jan. 6, 2021. (CNS photo/Leah Millis, Reuters)

Of all the shocking images that flooded our screens on Jan. 6, I am most outraged by a flag bearing the name of Jesus carried by insurrectionists as they mounted their assault on the U.S. Capitol.

As if Jesus would ever condone this out-of-control mob — fueled by lies and bearing deadly weapons — intent on overturning the legitimate election of Joe Biden and Kamala Harris.

I could barely take in that this was happening at the citadel of my country's democracy — let alone that the perpetrators would justify their violent behavior by invoking the name of the Prince of Peace.

In succeeding days, like most of the country, I was glued to cable news and smartphone alerts trying desperately to understand how this could have happened.

This gathering was not merely an attempted coup but also a mass-delusion event, not something that can be explained adequately through the prism of politics. Its chaos was rooted in psychological and theological phenomena, intensified by eschatological anxiety. … The conflation of Trump and Jesus was a common theme at the rally. "Give it up if you believe in Jesus!" a man yelled near me. People cheered. "Give it up if you believe in Donald Trump!" Louder cheers.

In other words, what we have here is a cult. It is a cult fueled by fear, falsehood and a fascist hatred of any who would challenge its demagoguery. Even worse, the cult's followers invoke a toxic Christianity laced with white supremacist, antisemitic ideology to justify itself.

I think it oddly providential — or perhaps synchronistic — that these horrific events occurred on the Feast of the Epiphany. An epiphany is a manifestation or an awakening. The deep-seated dysfunction — I would call it evil — plaguing our democracy is now plainly manifest. There is blessing in such an awakening. A painful clarity will inform our choices in the days ahead.

As I write this column, the church is celebrating the Baptism of Christ. The first reading from Isaiah (42: 1-3) describes the prophetic servant of God that prefigured Jesus:

He shall bring forth justice to the nations, not crying out, not shouting, not making his voice heard in the street. A bruised reed he shall not break, and a smoldering wick he shall not quench, until he establishes justice on the earth.

This Jesus is a far cry from the one evoked on the insurrectionist's flag.

In the Gospel, the heavens are "torn open" and the Holy Spirit descends on Jesus, "the Beloved," to anoint him for the mission described in the first reading, Isaiah 42:6-7:

I called you for the victory of justice … . I formed you and set you as a covenant of the people, a light for the nations, to open the eyes of the blind, to bring out prisoners from confinement, and from the dungeon those who live in darkness.

So we must ask, to what is the Holy Spirit calling us in this moment? What are we in the Christian community being asked to do?

Here are some things to consider:

We must pray. Pray for our country, our elected officials (including our unwell outgoing president), our law enforcement, our fellow citizens, and all those members of cult-like militias and hate groups who blindly follow a false god. Ask God to bring them out of their dungeons of darkness.

We must ask civic communities, communities of faith and religious leaders to join Cardinal Blase Cupich and my own Congregation of St. Joseph in issuing statements that condemn the use of violence and "work to end the rampant rage and division that have overpowered our nation."

We must contact our elected officials and demand accountability by prosecuting insurrectionists and rioters to the full extent of the law and censuring lawmakers and public servants who support the false narrative that the presidential election was fraudulent.

We must examine our own Catholic complicity in creating conditions for the failed coup attempt. And then we must work to change those conditions.

We must organize interfaith and interreligious networks to educate and provide a counter narrative to toxic cults, including Christianity's (and God's) prime directive to "love one another" and the biblical-historical Jesus and the nature of apocalyptic literature. We must also work to build relationships of trust and understanding across faith communities, and to engage with fellow citizens who are vulnerable to cultic expressions of an idolatrous heresy that bears no resemblance to Jesus the Christ.

I close with a special prayer the FutureChurch community prays every Sunday and Wednesday at our online Liturgy of the Word faith sharing:

A vision of your world as your love would have it:

A world where the weak are protected,
and none go hungry or poor.

A world where the riches of creation are honored and shared
so everyone might enjoy them.

A world where different races, cultures and creeds
live in peace and harmony, with equal regard.

Give us the inspiration and courage to go forth with willing hearts, minds, and bodies to build such a world, through Christ Jesus.

And may the God of hope fill us with every comfort and joy in believing. May the peace of Christ abound in our hearts and minds. and may the Holy Spirit gift and guide us (making Sign of the Cross) now and forever.