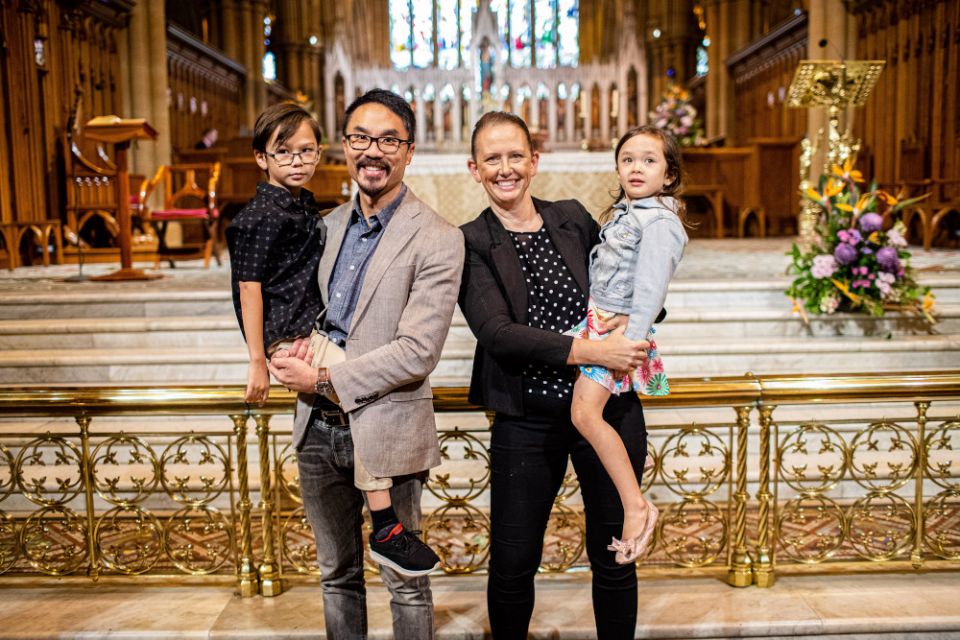 Daniel Ang, director of the Archdiocese of Sydney's Centre for Evangelisation, is pictured in an undated photo with wife, Sara, and children, Noah and Isabella. Ang is one of the authors of the working document released Feb. 25 for the forthcoming first session of the Plenary Council of the Church in Australia, due to be held in October. (CNS photo/The Catholic Weekly/Alphonsus Fok)

Sydney, Australia — The need for "deep, spiritual conversion of all members of the church stands out" as a key theme of the "instrumentum laboris," the working document for Australia's Plenary Council, due to begin in October, said one of its authors.

"There's a need for a greater expression of the co-responsibility of all the baptized if the church (in Australia) is to take the mission to evangelize seriously in the decades ahead," said Daniel Ang, director of the Archdiocese of Sydney's Centre for Evangelisation and a co-author of the working document.

"And what I think the document recognizes is that while we could well reform some of our structures and policies, ultimately even these changes will not bear fruit without the conversion of the relationships within the church and with others beyond the church that give these reforms life or possibility."

"I think it clearly delineates the fact that the renewal of the church will be achieved by centering ourselves in Christ and facing the changing circumstances of our time with fidelity and creativity," he told The Catholic Weekly, newspaper of the Archdiocese of Sydney.

The 76-page document, currently awaiting approval from the Vatican's Congregation for Bishops, was released online in Australia by the plenary's national facilitation team and will serve as the key framework and stimulus for discussion at the coming council.

The plenary's first session is due to begin in October.

Ang said the working document is more than a mere summary. It is "a synthesis that seeks to integrate the experience of Catholics in Australia, the experience and insights of the church as communicated in tradition, and with an ear to what the Spirit is inviting of the church to be faithful to Jesus in the present," he said.

In addition to Ang, who has headed the Centre for Evangelisation since June, the writing group included Archbishop Timothy Costelloe of Perth, plenary president; Trudy Dantis, director of the National Centre for Pastoral Research; and Fr. Kevin Lenehan, master of the Catholic Theological College in Melbourne.

Costelloe welcomed the document's release after a six-month drafting process.

"This is an exciting step forward and we take it together, amidst a time of great change. More than 220,000 people participated in the first stages of listening and dialogue, and those voices can be heard clearly in the working document," he said.

"As writers, we drew inspiration from Scripture, writings and teachings of the church, including the documents of the Second Vatican Council, encyclicals and papal exhortations, Australian bishops' pastoral letters and more."

Lana Turvey-Collins, Plenary Council facilitator, said an accompanying reflection guide was developed to help Catholics throughout the country engage with the working document and to maintain a national focus for the council.

"A document has the most value when it is brought to life through dialogue and response," she said.

"In this particular time of changing norms in society and the emerging reality of post-COVID life, it is increasingly important to have as many faith communities, groups, agencies and individuals participate in this continued discernment as possible.

"Every single person is needed for God's mission today," she said.

While the first session of the Australian Plenary Council was planned to commence in October in Adelaide, it was moved online due to the coronavirus pandemic.

However, organizers are hopeful the planned second session, due to be held in July 2022 in Sydney, will still go ahead as planned in the wake of the rollout of COVID-19 vaccines, which began in Australia Feb. 22.

With the church facing significant challenges in areas such as religious freedom and other legislative issues around the nation in recent years, together with declining rates of participation in church life on the part of Catholics, the plenary is expected to have a far-reaching effect on the life of the church in Australia.

The last plenary council was held in 1937.