Schüller: Now is not the time for Third Vatican Council 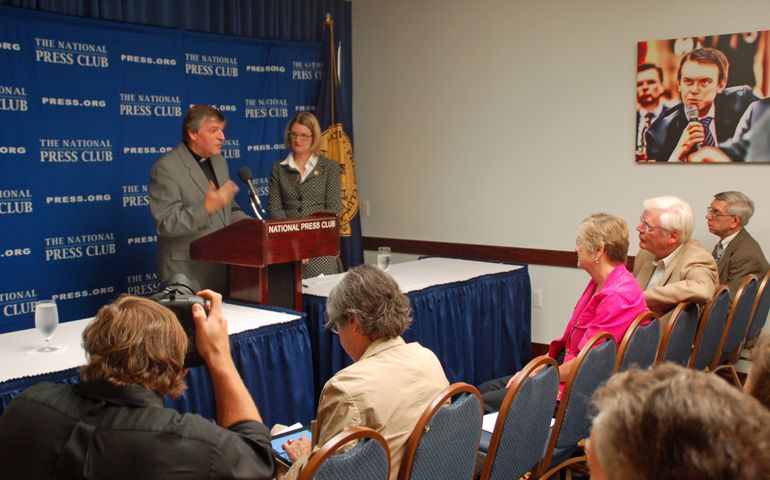 Washington — Women who have chosen to become ordained Catholic priests are "very prophetic," Fr. Helmut Schüller told a group of journalists Monday, but he said the focus still should be on opening up the entire priesthood to women.

"It's a system we have to change," he said during a press conference at the National Press Club here. "It's a question of strategy."

Even so, "we see in these women who are ordained already very prophetic women," Schüller said.

He also is wary of any moves to allow women to become deacons, saying he has heard the Vatican is trying to degrade the structure of the deaconate, possibly as a preparatory strategy before making such a change. "I'm warning sometimes: Pay attention, as it could be a threat," he said.

Washington is the fifth stop on Schüller's 15-city, coast-to-coast tour of the United States that began July 16. He speaks Monday night at the Augustana Lutheran Church in Washington. His appearances in New York, Boston, Philadelphia and Baltimore have attracted crowds of 300 to 700 people, with several hundred spilling out of a small church in the sweltering heat of Boston last week.

Ten groups are sponsoring the tour, called "The Catholic Tipping Point: Conversations," including Call to Action and the Women's Ordination Conference.

Schüller's reform mission began in 2006, when he and a group of fellow parish priests, concerned about a growing shortage of clergy and a trend toward consolidating parishes, organized the Austrian Priests' Initiative. Five years later, they embarked on a defiant "Call for Disobedience" to push for core changes in the church, especially the ordination of women and married priests.

He since has been rebuked by his own archbishop and stripped of the title "monsignor," but that hasn't deterred him from promoting the message of reform, rooted in the thinking that the best way to spread the teachings of the Gospel is through a communion of believers -- a communion that does not succeed easily without the spiritual guidance of clergy.

Asked why he does not just leave the church, Schüller said simply: "It's my church."

He has heard calls in Austria and elsewhere for Pope Francis to convene a Third Vatican Council, but said now is not the time.

"This council would be a very conservative assembly, and then you are sitting there with results you didn't want," he said. "The problem would be what will happen to the results of such a council. Church leaders not accountable to the people of God can do with the results of the council whatever they want."

On the other hand, Schüller said, he could support a move to create a council whose main focus would be the issue of sexual abuse, a proposal Australian Bishop Geoffrey Robinson is promoting.

One of the changes the Austrian Priests' Initiative promotes is a "kind of constitution" for the church, he said, adding, "If we would have had such a constitution in our church, the problem of sexual abuse would have been handled in quite another way because the victims are lacking any rights in this church."

During his "Tipping Point" tour, Schüller has met individually with priests, but he acknowledged that young priests are reluctant to join the reform effort. One reason, he said, has to do with the image of the church that has come out of the Vatican in the last 20 years -- an image, he says, of "absolutist monarchy." He says that image attracts young men of a "special type," but others "have just another image of the church in their heart."

But beyond that, he said, young men are looking at today's priests and seeing a mission that may no longer be fulfilling. He talked about the difficulties priests, especially in Austria, have serving multiple communities and, as he has done in past talks, said the words he hates to hear most from parishioners: "Father, we know you have not enough time, but let me speak to you a little bit."

"I think that is a scandal," he said.

"The priests have to do their work in circumstances that are not really supportive anymore," he said. "They are burning out not because of their workload but, more than that, out of the feeling that they cannot do their service, their ministry in the way they wanted to do it, with real contact with the people."

Theology | Schüller: Now is not the time for Third Vatican Council

State of the sacraments clarified in Chicago