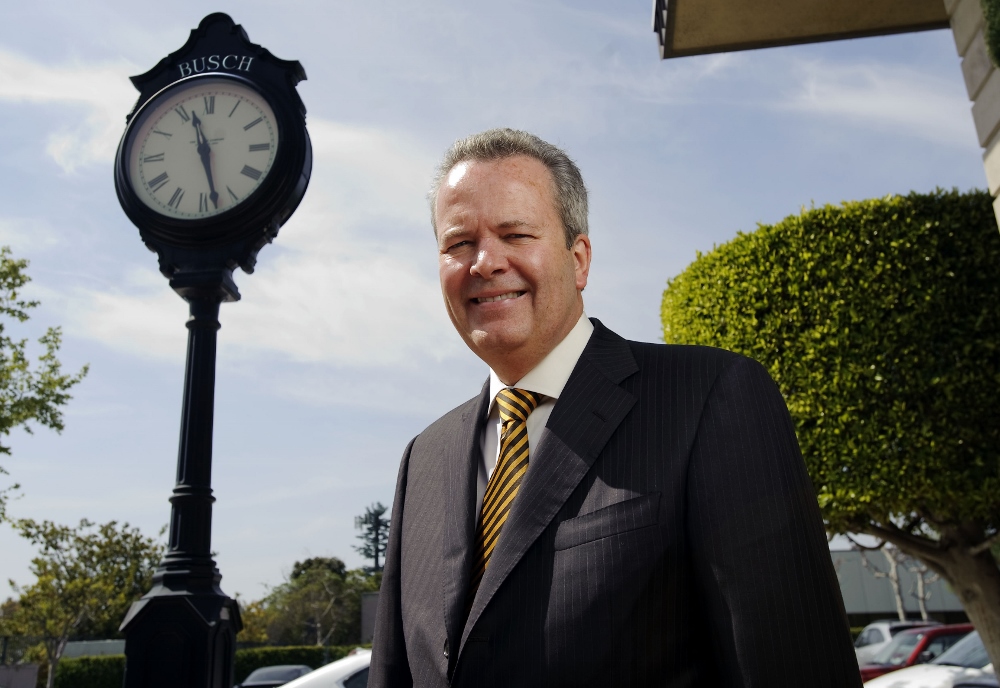 In 2002, in the wake of the Boston-centered clergy sex abuse scandal, lay Catholics gathered in a church basement to pray and try to change the church through what would become the reform group Voice of the Faithful.

Now another group of reformers is emerging. But it's quite different from Voice of the Faithful, which tried to avoid ideological issues to focus on supporting victims, fighting clerical culture and promoting lay leadership.

The Napa Institute, known for its blend of conservative theology and libertarian economics, hosts annual conferences that attract wealthy Catholics to California's wine country. The organization's focus on apologetics, sexual ethics and the need to counter secularization is shared by its ecclesiastical adviser, Philadelphia Archbishop Charles Chaput, a darling of the Catholic right.

This summer, the institute — and its controversial co-founder, millionaire Timothy Busch — have become vocal critics of church leaders, including Pope Francis, on issues of sex abuse and cover-up. And this fall, on Oct. 2, Napa will host a one-day conference in Washington, D.C., touted as exploring "Authentic Reform" in response to clergy sex abuse.

Busch — an attorney who specializes in "high net-worth" estate planning and the CEO of a company that manages hotels and resorts in California — became part of the story about Archbishop Carlo Maria Viganò, when Busch said Viganò shared his plans to write his now-famous "testimony." That document accused Vatican officials of covering up former Washington Archbishop Theodore McCarrick's alleged sexual harassment of seminarians.

The letter was released by several conservative Catholic news outlets, including the National Catholic Register, which is owned by EWTN. Busch serves on EWTN's board.

Busch told The New York Times that Viganò had "done us a great service" by releasing his dossier and noted that Viganò had assured him that retired Pope Benedict XVI had confirmed Viganò's account.

But in a later communication to Napa supporters, Busch insisted that he "did not preview a copy of or in any way participate in drafting Archbishop Vigano's testimony, nor was I consulted in any capacity about his testimony."

The Napa Institute did not respond to NCR's requests for interviews.

The week before the release of the Viganò letter, the Napa Institute severed ties with Archbishop John Nienstedt, who had been a close adviser to Busch. Nienstedt resigned as archbishop of St. Paul-Minneapolis in 2015 for failure to deal with sexual abuse and because of allegations that he himself was guilty of sexual misconduct.

Busch is also active in other conservative Catholic organizations, including Legatus, an organization for Catholic CEOs and their spouses, and the Acton Institute, a free-market Christian think tank.

Busch and his wife, Steph — together with Jesuit Fr. Robert Spitzer — co-founded both the Magis Center for Reason and Faith, which Spitzer runs, and the Napa Institute.

The Napa "Authentic Reform" conference schedule includes presentations on such topics as "Humanae Vitae as a Charter for Reform," "Purifying the Clergy" and "The Problem of Homosexuality." 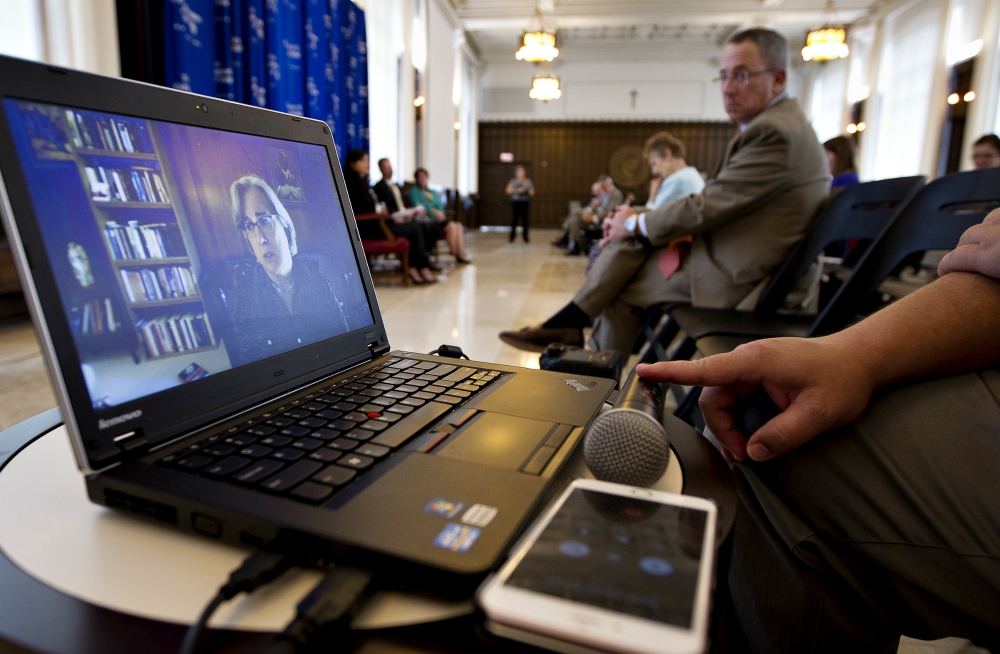 Janet Smith talks via Skype about "Humanae Vitae" at a 2016 news conference at the Catholic University of America. Smith is scheduled to speak on "The Problem of Homosexuality" at the Napa Institute's "Authentic Reform" conference Oct. 2 in Washington, D.C. (CNS/Tyler Orsburn)

"As Catholics faithful to the Church's teaching and mission, we call for a deep and authentic cleansing of American Catholic life," says a description of the conference on Napa's website. "We invite and encourage all Catholics to attend and take an active part in rebuilding confidence in our beloved Church."

At $500 per person (plus hotel), not all Catholics may be able to afford to attend. But the steep price is just one problem critics see with "Authentic Reform."

"The church in the USA needs to come together to find a path for reform and new unity," said Massimo Faggioli, professor of theology and religious studies at Villanova University in Pennsylvania. "Partisan initiatives are only going to make the problems of this church worse, especially if the only voice that will be heard will be the voice of those who are already very influential."

Instead, the church needs what Francis has called "synodal moments," in which the whole church is involved in discernment about important issues, Faggioli said.

"This is exactly the opposite," he said of the upcoming "Authentic Reform" conference. "It's those who already have a very powerful voice. It's laypeople but whose mentality is clerical."

Scheduled speakers for the conference include:

"It is no secret I am trying to do what I can to help Jesus purify his bride, the church," Smith wrote on Facebook. The leave of absence will allow her to "give this matter my full attention."

The conference's speaker lineup gives a clear indication of the type of reform it's promoting, said Dan Cosacchi, a religious studies lecturer at Fairfield University. "I don't think it's healthy reform," he said.

"True reform always seeks to maintain the communion of the church over and against schism or factionalism," Cosacchi said, citing a 2003 lecture by the late Cardinal Avery Dulles, in which the Jesuit theologian tried to differentiate between "true and false reform" in the church.

Dulles also said that true reform needed to guard against nationalism. Cosacchi said he sees tendencies toward a "nationalist Catholicism" in some of the conference speakers.

Cosacchi said he would add another element of "false reform" — that it is rooted in elitism, whether clerical or lay. "This is not the average Catholic in a pew on Sunday," he said of those who could afford the $500 Napa conference fee. "These are wealthy individuals."

The "Authentic Reform" conference precedes another Napa event, the annual "Principled Entrepreneurship" conference held in conjunction with the Busch School of Business at the Catholic University of America Oct. 3-5. That event is $2,000 per person.

Related: Worldliness is the very heart of the Catholic Church's crisis

This year's Catholic University/Napa event is on the "Dignity of Work" and features workshops with businesspeople (such as Hobby Lobby president Steve Green), politicians (former GOP presidential candidate Carly Fiorina) and academics. No representatives from organized labor are scheduled to discuss the "Dignity of Work."

Last year's event was on "Good Profit" and featured controversial GOP donor Charles Koch as a headliner. Events such as these — as well as other attempts to turn Catholic University into a conservative Catholic bastion — have been a source of conflict with some faculty, and there is concern about both Napa events in October.

One Catholic University employee quipped about the upcoming reform conference: "I get worried anytime people start using the term, 'authentic.' "

Faggioli questions the word "reform" in the conference's title. "There's nothing that's about reform," he said. "It should be called 'Status Quo.' "