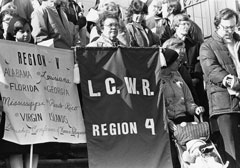 Both groups can trace their history to 1950 when Pope Pius XII convened the First General Congress of the States of Perfection, calling to Rome the superiors of religious orders throughout the world.

Six years later, at the request of the Vatican’s Congregation for Religious, the general and provincial superiors of women’s communities in the U.S. met in Chicago to create the Conference of Major Superiors of Women, with three primary goals: promote the spiritual welfare of American sisters, increase the efficacy of their ministries, and foster closer cooperation with all religious in the U.S. as well as bishops, clergy and Catholic associations.

For 15 years the Conference of Major Superiors of Women worked to meet those goals, holding regional and national conferences; establishing standing committees on Latin America, catechetics, health and finance; and after the Second Vatican Council (1962-65), exploring how best to respond to the call for renewal of religious life.

At its first national conference in 1964, CMSW decided to send its elected chair, Loretto Sr. Mary Luke Tobin, to the third session of the Vatican Council. On her way to Rome, the Vatican invited her to be one of a small group of official women observers. By 1967, CMSW was examining the results of its survey on congregations’ readiness to adopt Vatican II mandates.

When the conference met in 1971 to adopt new bylaws and change its name to the Leadership Conference of Women Religious, a division emerged. A small group, calling itself Consortium Perfectae Caritatis, expressed concern that LCWR was deviating from what it believed was authentic church teaching.

Over the years Perfectae Caritatis continued to meet on its own. LCWR made intermittent attempts to communicate with the group to see if its members wanted to resume participation in LCWR and a few congregations returned. In 1992 the splinter group was officially founded as the Council of Major Superiors of Women Religious, receiving Vatican approval in 1995.

Today LCWR has more than 1,500 members representing about 80 percent of the 57,000 women religious in the U.S. The Council of Major Superiors of Women Religious has 108 member congregations. A few congregations hold membership in both groups. 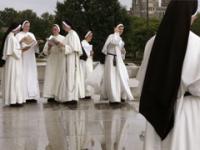 Like LCWR, the Council of Major Superiors of Women Religious aims to foster collaboration among the leaders of its member congregations, but it takes what might be a called a more traditional view of religious life. According to its website (www.cmswr.org), the council’s members look to the “patrimony of the Church’s teaching on religious life,” while the Leadership Conference of Women Religious (www.lcwr.org) believes “God’s call is written in the signs of the times.” The websites illustrate other differences as well, including CMSWR members in religious habits and LCWR members in modest contemporary clothing.

Prominent on the council’s home page is a call for letters to Congress regarding the Health and Human Services’ insurance mandate covering contraceptives, sterilization and abortion-inducing drugs. There is a link to statements on the issue from the U.S. Conference of Catholic Bishops and New York Cardinal Timothy Dolan.

LCWR’s homepage includes a link to its “Resolutions to Action” section, featuring an analysis of the current economic crisis with reflection on Catholic social teaching. Earlier papers dealt with such topics as economic justice, interfaith dialogue with U.S. Muslims, and immigration.

Both groups have compiled resource books for their members. In 2009 CMSWR published The Foundations of Religious Life: Revisiting the Vision, with chapters on religious consecration, the spousal bond, vows, community, and the evangelical mission.

Among LCWR’s publications are a “Mentoring Leadership Manual” and the results of their studies on current ministries of sisters in the U.S. and leadership roles for women in the church.

In 1977 the United Nations granted LCWR nongovernmental organization status, bringing the perspective of women religious to issues of disarmament, women and human rights. A group of LCWR members traveled to Beijing in 1995 to participate in the U.N.’s Fourth World Conference on Women.

LCWR collaborated with the Conference of Major Superiors of Men and the U.S. bishops in the establishment of the National Religious Retirement Office and a tri-conference Commission on Religious Life and Ministry.