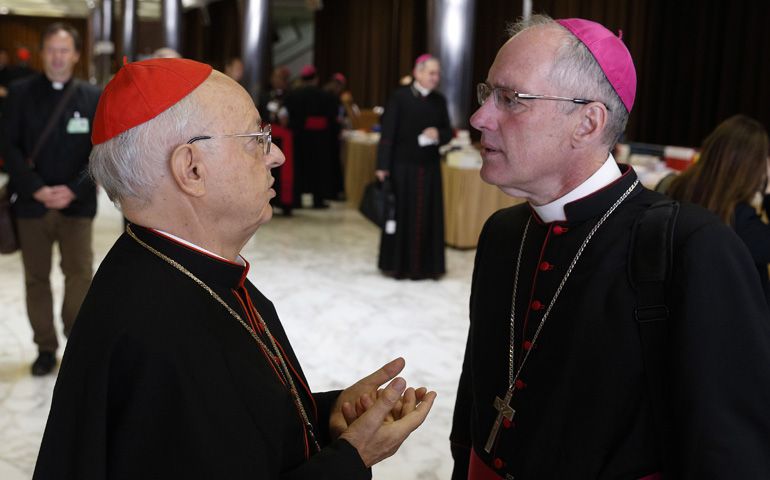 Italian Cardinal Lorenzo Baldisseri, general secretary of the Synod of Bishops, left, speaks with Archbishop Paul-André Durocher, president of the Canadian Conference of Catholic Bishops, before the Thursday morning session of the extraordinary Synod of Bishops on the family at the Vatican. (CNS/Paul Haring)
This article appears in the Synod on the Family feature series. View the full series.

Vatican City — Bishops meeting at the Vatican to discuss issues of family life have to relearn how to do theology in order to address contemporary concerns, an archbishop attending the meeting said Thursday.

Unlike in the past, when bishops or theologians would deduce theology from general, sometimes idealized notions of God or humanity, the prelates at the Synod of Bishops on the family are using inductive reasoning to instead examine theology in the reality of families today, Canadian Archbishop Paul-André Durocher said.

"What's happening within the synod is we're seeing a more inductive way of reflecting, starting from the true situation of people and trying to figure out what's going on here," said Durocher, who leads the Canadian Conference of Catholic Bishops.

"I think we're learning to use the Harvard case study method in reflecting theologically on the lives of people," continued the archbishop, who also heads the archdiocese of Gatineau in Quebec.

"And we're only, in a sense, starting to learn how to do this as church leaders," he said. "And this is going to take time for us, to learn to do this and together to come -- as we reflect on this -- to find what is the way that God is showing."

Durocher spoke Thursday during a Vatican press briefing on the synod.

His reflections, which came at the end of the 70-minute briefing, may suggest a change in how bishops develop theological thought, which in the past has typically followed deductive methods of authors such as Aristotle and St. Thomas Aquinas over inductive methods used in systems like pastoral, or even liberation, theology.

Unlike previous synods, the Vatican is not releasing texts or summaries of the prelates' talks but is instead providing daily briefings with three spokesmen who are attending the synod and summarizing events: official Vatican spokesman Jesuit Fr. Federico Lombardi, in Italian; Chicago archdiocesan Fr. Manuel Dorantes, in Spanish; and Basilian Fr. Thomas Rosica, in English.

Cardinal Gerhard Müller, prefect of the Congregation for the Doctrine of the Faith, criticized that practice in a television interview Wednesday.

"These interventions should be published as before," Müller said. "I think all Christians have the right to be informed about [the] intervention of their bishops."

Joining the spokesmen for the briefing Thursday were Durocher and Cardinal Francesco Coccopalmerio, president of the Pontifical Council for Legislative Texts and a member of a new commission established by Pope Francis last month to study possible changes in the church's processes and laws surrounding the sacrament of marriage.

Speaking on the work of that commission, Coccopalmerio spoke at length Thursday about one issue that has dominated news coverage of the synod: possible changes to the church's prohibition on giving Communion to divorced and remarried people who do not or cannot obtain annulments of their first marriages.

In one instance, Coccopalmerio said one synod member had brought up the way that some Orthodox churches treat such second marriages, allowing those marriages to be blessed but not considered of equal sacramental value to the first marriage.

"I believe that way would be very difficult, but I repeat, the synod has considered" it, Coccopalmerio said.

Addressing the work of the new commission, Coccopalmerio also said there were three main ways he and others were considering to simplify the annulment process, which can sometimes be very lengthy and expensive.

One of those ways, he said, would be to allow for a new administrative procedure for annulments where the power to decree a marriage annulled would be vested in the local bishop.*

Such a situation, Coccopalmerio said, could be used when there is an instance of a marriage that is "certainly null" but there are no legal documents to show that fact.

"In this case, if we know the people are credible, honest," then a bishop could decree, "I, bishop of this diocese, can say this marriage is null," the cardinal said.

"We have to give concrete answers to people who are in situations of urgency or seriousness, following Pope Francis," Coccopalmerio said at another point, adding that that in urgent cases, the church should not require people to leave second unions as a condition of receiving Communion.

On the issue of divorce and remarriage, Durocher stressed that most prelates in the synod have not had an opportunity to speak on the subject.

"Where the majority of the synod fathers stand on the issue is anybody's guess," he said.

"This synod is meant to lay the foundation for a yearlong discussion that will continue, and we'll see the fruit of that discussion next year," he continued, referring to a second synod to be held on the subject of family life in 2015.

Durocher also said it was "not an adequate way" to speak of the subject to refer to some prelates who want mercy for those living with divorce and remarriage, while others want to pursue justice.

"What we're trying to do is find what is the will of God, and that will is a will of justice and of mercy," Durocher said.

"There are discussions about this, and that is quite normal," he continued. "And I think it is healthy for the church to have this discussion. And it's a discussion that will not end with this synod. It will continue."

Giving an overview of the latest discussions among the synod members, Rosica said Thursday that the talks could be described "as being animated, impassioned, fraternal, 'lay the cards on the table.' "

Among areas of concern expressed by the prelates, Rosica said, was for the care of children.

The priest quoted a passage from one unnamed bishop's remarks: "Children are always a new field in which the seed of the word has to be planted afresh."

"We who speak for the church come to understand that we have to be that seed," the bishop continued. "Always and simply sowers of the seed ... We are not to tear up what we see to be weeds."

Approximately 190 prelates are at the synod and will be able to vote in the discussions. Some 60 others, mainly non-prelates, have been selected in other roles and are able to contribute to discussions but not to vote.

*This sentence has been clarified from its original version.

After his fall, Law found normality in Rome