Bishops told HHS rule is only one part of U.S. religious freedom threats 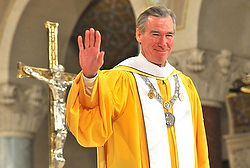 John Garvey, president of The Catholic University of America, waves during his inaugural Mass in January 2011. (CNS/Catholic Standard/Rafael Crisostomo)

ATLANTA -- Briefing the U.S. bishops Wednesday on current threats to religious liberty in the nation, speakers at the bishops' meeting last week said January's federal Health and Human Services rule sharply narrowing the definition of religious organizations is only one among many current threats, despite media coverage that has focused almost entirely on the mandate.

John Garvey, who was a professor of constitutional law at the University of Notre Dame and Boston College before his 2010 appointment as president of The Catholic University of America in Washington, cited several other recent federal actions that he said have "narrowed considerably" the "landscape of religious freedom" in the United States.

"We are facing not just one, but a series, of extraordinary challenges in this area," said Archbishop William E. Lori of Baltimore, chairman of the Ad Hoc Committee for Religious Liberty of the U.S. Conference of Catholic Bishops that was established last fall.

"Nothing less than our full and undivided efforts in response will suffice to meet those challenges," he said.

The bishops, meeting in Atlanta on Wednesday and Thursday, devoted most of their afternoon session the first day to issues of religious freedom at home and abroad. (Click here for coverage of the international part of that session.) Garvey and Lori were the chief speakers on the issue of religious freedom challenges in the United States.

Garvey focused on recent federal efforts to narrow definitions of what constitutes a religious organization, while Lori spoke mainly about projects his committee and the USCCB have undertaken in recent months to combat federal infringements on religious freedom.

The January HHS rule mandated free health insurance coverage for artificial contraception and voluntary sterilization for employees nationwide, exempting from that mandate only religious organizations narrowly defined as those whose primary activity is inculcating religious belief and who primarily employ and primarily serve only members of their own faith.

That regulation has since become the primary public target of activities by Lori's committee and the bishops more generally, but bishops and others involved in the fight point out that it was not the bishops but the Obama administration that made the HHS rule a flash point for the debate.

As the USCCB general secretary, Msgr. Ronny E. Jenkins, told NCR in a hallway conversation on the eve of the Atlanta meeting, the Lori committee was formed well before the HHS regulation on artificial contraception and sterilization was issued, and from the start it had as an integral part of its portfolio international threats to religious freedom -- long an active concern of the U.S. bishops -- as well as new domestic threats.

Virtually all media coverage of the new Lori committee in the last few months has largely ignored its broader scope and focused almost entirely on its U.S. issues, especially its lead role in articulating and carrying out the bishops' opposition to the HHS rule as a fundamental violation of the U.S. tradition of a broad constitutional interpretation of religious entities covered by First Amendment protection of religious freedom.

Garvey sought to lay out a broader perspective on the issue, saying there have been a number of significant federal actions recently that reveal a bias against treating religiously sponsored organizations as integral parts of religious bodies and against granting previously standard exemptions to such organizations.

He said in the recent U.S. Supreme Court decision Hosanna-Tabor Church v. EEOC, the high court correctly ruled that the Equal Employment Opportunity Commission did not have jurisdiction under its discrimination laws to force the Evangelical Lutheran Church to reverse its firing of a religious teacher who claimed she had been dismissed because of a handicap.

"The disappointing thing" in that case, he said, was "that the executive branch took such a dim view of the church's right" that it argued before the court that the Evangelical Lutheran Church "had no more rights ... than would a labor union or social club" in deciding who it would employ.

Garvey said the federal National Labor Relations Board has similarly impinged on religious freedom in two recent cases in which the the board upheld union-forming elections by faculty of Manhattan College in New York and St. Xavier University in Chicago by ruling that those institutions are not Catholic schools exempt from unionizing rules in terms of the 1935 National Labor Relations Act, also commonly referred to as the Wagner Act.

"The Supreme Court has held that the Wagner Act does not apply to lay teachers in Catholic high schools because it's their job to instruct students in the faith. ... Should we have a different rule for colleges?" he asked.

The methods by which Catholic colleges engage in faith formation are different from those in grade school and high school, but faith formation is an integral part of their mission, he said. "The government should not make a rule that exempts only those colleges that conform to its fairly ill-informed view of how religion should be taught."

In 2008, Garvey said, HHS issued a rule that doctors and hospitals could not be sued for not presenting abortion as a medical alternative in counseling pregnant women; last spring, "HHS, at the urging of the new administration, repealed the regulation despite public comments that ran two-to-one in favor of it."

"Without such a rule," he said, not only could a pregnant woman sue her obstetrician or gynecologist for malpractice for failing to suggest abortion as an alternative, but "professional bodies like [the American Congress of Obstetricians and Gynecologists] could put conscientious doctors out of business by revoking their board certification."

Garvey also cited the recent loss of a major federal contract on human trafficking by the USCCB Office of Migration and Refugee Services as another clear example of the current administration's negative treatment of Catholic agencies that do not follow the administration's latest demand that such programs offer "the full range of reproductive services" -- including abortion, artificial contraception and voluntary sterilization -- to all its clients.

Before the new federal funding rules took effect, MRS held the major national contract to combat human trafficking in the United States and was given a top rating for its performance in that area. Under the revised rules on reproductive services, it was summarily excluded from the latest federal contracts, and its past record of effective and exemplary service in that field became irrelevant.

In addition to the HHS position on contraceptive coverage as a federally mandated health care insurance coverage by many Catholic institutions, Garvey cited several other instances of what he described as federal overreach in the area of religious liberty.

Before that, the basic rule "was that religious liberty is protected unless the government has a compelling reason to override it -- like protecting the national security in time of war, or preventing the taking of innocent life. Now the rule is that religion is protected against discrimination; but otherwise the government can ignore religious claims for any legitimate reason."

"There has been a decline in respect for religious liberty" in both U.S. law and public opinion in recent decades, he said.

"Religious liberty these days is given a lot less scope," he said. "It protects priests but not teachers," and some Catholic college or universities but not others, some religious orders but not others.

Garvey argued that the real claim for religious liberty today "lies farther back than we have put it," namely in the love and care for God that the American people hold.

"The Fortnight is strictly about the issue of religious freedom, at all levels of government here in the U.S. as well as abroad," he said. "It is not about parties, candidates or elections, as some have suggested."

[Jerry Filteau, NCR's Washington correspondent, was in Atlanta for the bishops' June 13-14 meeting.]