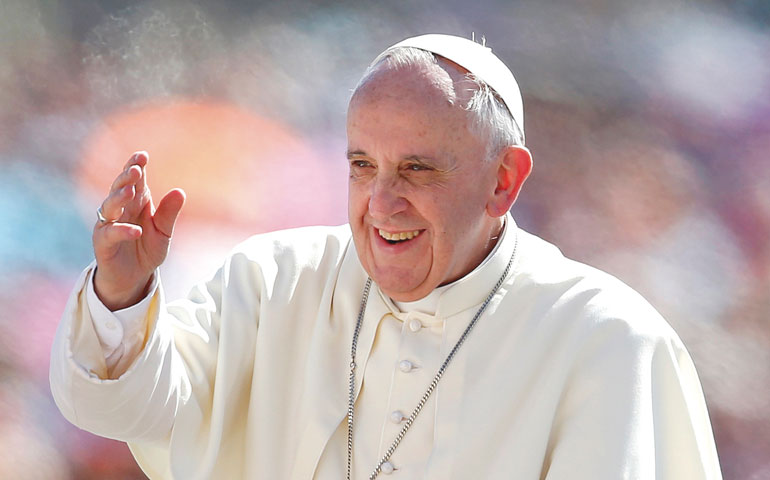 Francis' papacy only just reached the six-month mark, so it's probably premature to be talking about make-or-break moments for his legacy. That said, the Oct. 1-3 maiden summit of eight cardinals from around the world, tapped by the pope to advise him on governance and reform, profiles as a potentially critical turning point.

When those eight cardinals, plus a bishop-secretary, sit down with Pope Francis in a meeting room in the Apostolic Palace, the expectation is that some serious sausage will be ground on a variety of fronts:

Dubbed the "G-8," the panel was announced in April and styled as a move toward greater collegiality. The American on the team is Cardinal Sean O'Malley of Boston, joined by Cardinals Giuseppe Bertello, governor of Vatican City; Oscar Rodríguez Maradiaga of Tegucigalpa, Honduras; Francisco Javier Errázuriz Ossa of Santiago, Chile; Oswald Gracias of Mumbai, India; Reinhard Marx of Munich; Laurent Monsengwo Pasinya of Kinshasa, Congo; and George Pell of Sydney. Rodríguez is the group's coordinator.

Members appear to be preparing diligently. In a late July interview, O'Malley told NCR he was interviewing all the other American and Canadian cardinals to get ideas for reform and had also written to all the North American bishops. Errázuriz conducted an open discussion in May with the Latin American bishops, while Rodríguez planned to stop off in Quebec for a listening session with the Canadian bishops before heading to Rome.

At least some cardinals also seem serious about change. In a recent interview in Germany, Marx said it's important to have a headquarters in Rome that Catholics can be proud of -- not so subtly implying this isn't always the case right now.

G-8 members plan to gather at the Vatican's Casa Santa Marta for a brief organizational session before they meet the pope. The following are expected to be among major points under consideration.

Standing of the G-8

One threshold matter is the identity and mission of the G-8 itself. Is it a permanent body, for instance, or merely a temporary expedient to help Francis get a reform off the ground?

Assuming the group will be around, its membership may have to be tweaked. Already some critics have pointed out that Francis failed to name a prelate from any of the 22 Eastern churches to the body, an especially glaring omission given current alarm around the Catholic world about the fate of Christians in places such as Syria and Egypt.

Some observers say if the idea is to hear the local churches, the panel might better be composed of the elected presidents of regional assemblies of bishops, such as the Episcopal Conference of Latin America and the Federation of Asian Bishops Conferences, as opposed to cardinals handpicked by the pope.

Other questions also arise. For instance, is the G-8 destined to remain a kitchen cabinet that doesn't appear anywhere on formal Vatican flowcharts? Or will it become an actual agency of governance, perhaps situated between the pope and other layers of authority?

On background, one cardinal on the panel told NCR in mid-September he expects the pope will give the group a formal charter, in part so it will clearly have the standing to solicit information and cooperation from Vatican officials and agencies. He cautioned, however, that the pope may want to see how things work out before setting the structure and role of the group in stone.

This may not be a question Francis has to answer right away, because whatever the canonical fine points, the political reality is clear: The pope takes the G-8 seriously, which means everybody else in the Vatican is obliged to as well.

Over the years, church leaders from other parts of the world frequently have bemoaned what they see as spotty and ineffective financial controls in the Vatican, symbolized by the failure to implement an independently certified annual audit. Most observers believe that insistence on tighter external controls will be a core G-8 recommendation.

The Institute for the Works of Religion, better known to the world as the Vatican bank, is likely to come in for sustained discussion. Some members of the G-8, such as Rodríguez and Marx, have openly questioned whether it's truly necessary for the Vatican to have its own bank.

Other cardinals, however, say if the Vatican bank didn't exist, the pope would have to invent it. Catholic agencies need a way to transfer resources around the world, they argue, especially in regions where banking systems are either unreliable or nonexistent.

During a press conference aboard the papal plane en route to Rome from Brazil, Francis laid out three options for the Vatican bank: closure, transformation into an investment fund, or rebranding as an "ethical bank." On background, cardinals on the G-8 say the most likely scenario is some form of the ethical banking option, meaning a deeper commitment to secular "best practices" of transparency, accountability and socially responsible investment.

With a total workforce in the Roman Curia of less than 3,000 people and another 1,500 or so who work for the City State, the Vatican is hardly the colossus of popular myth. Nonetheless, some of the G-8 cardinals believe it may be time to take a look at downsizing, with a special eye toward eliminating duplication of effort.

Some wonder, for instance, if some of the pontifical councils are truly necessary. If the aim of the diplomacy practiced by the Secretariat of State is promotion of justice and peace, for instance, why is there a separate council devoted to that topic? In other cases, consolidation has been proposed, such as blending the Council for Justice and Peace, the Council for the Pastoral Care of Migrants and Itinerant People, and the Vatican's charitable office Cor Unum into one agency.

Such moves are tricky, and not merely because it could mean longtime Vatican employees would find themselves out of work. Politically, downgrading an office can be read as backtracking on its subject matter. In 2006, Benedict XVI tried folding the Council for Inter-religious Dialogue into the Council for Culture, only to reverse himself a year later after widespread criticism that he was dialing down the church's commitment to interfaith relations.

On background, one G-8 cardinal told NCR that the group will have to take a look at Vatican Radio, the Vatican's largest employer with a staff of more than 400. Because it doesn't accept commercial advertising and it broadcasts in some 40 languages, it's a chronic drain on resources, and the cardinal suggested the need for market research to determine how effective the programming really is.

The cardinals are also expected to debate creating at least a bit of new bureaucracy -- a "moderator of the Curia," designed to coordinate the activities of the various departments in the name of the pope. Some are enthusiastic about the idea, originally floated by Italian Cardinal Francesco Coccopalmerio, president of the Pontifical Council for Legislative Texts, while others fear it risks creating an overly powerful "vice pope."

Though internal Vatican operations are expected to occupy most of the G-8's attention, especially in the early stages, Francis has also asked it consider a chronically delicate aspect of the church's pastoral practice: the circumstances under which marriages may be annulled and whether divorced Catholics who remarry without an annulment can be admitted to the sacraments, especially Communion.

On this front, most participants in the coming meeting say it would be unrealistic to expect quick resolution of the underlying issues. One preliminary matter is what the right forum is to address them -- whether the G-8 itself should handle it, for instance, or whether a synod of bishops should be devoted to the subject, or one of the various Vatican agencies asked to commission a study.

During his press conference on the papal plane, Francis said he wanted a deeper reflection on the church's pastoral approach to marriage, and also wanted to "revisit" the legal questions surrounding annulments. He also hinted that he would be open to the Orthodox practice of permitting believers in a second marriage to receive the sacraments and otherwise participate fully in the life of the church.

Cardinals taking part in the G-8 meeting have been told that the pope plans to be with him for almost all of their deliberations, so they should have an ample chance to sound out what exactly Francis has in mind.

On Oct. 4, the day after the summit wraps up, the eight cardinals have been asked to accompany Francis on a one-day visit to the famed Italian city of Assisi, where the pontiff plans to visit several sites connected to the legacy of St. Francis, as well as a center for sick and disabled children.

A version of this story appeared in the Sept. 27-Oct. 10, 2013 print issue under the headline: Taking on reform.