With conclave looming, all bets are on 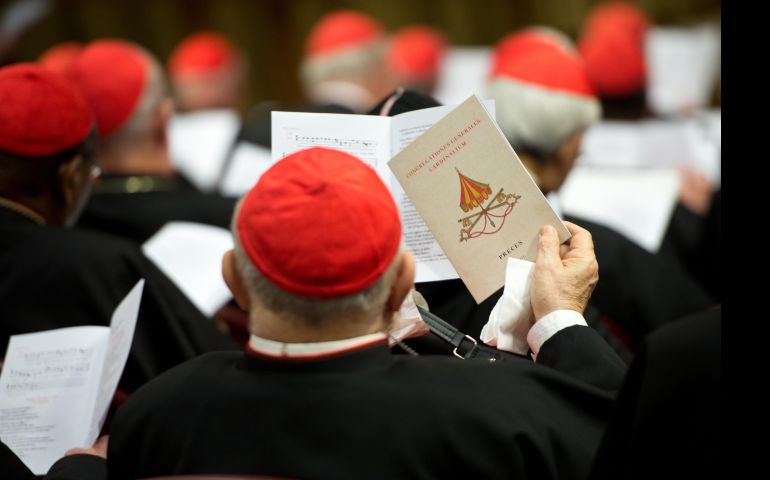 A prelate holds up a booklet emblazoned with the "sede vacante" seal as cardinals gather in synod hall at the Vatican March 7 for one of several general congregation meetings ahead of the conclave. (CNS photo/L'Osservatore Romano)
This article appears in the Conclave 2013 feature series. View the full series.

Casting ballots for the next pontiff is a privilege afforded only those in the College of Cardinals. But that hasn’t stopped those outside the Sistine Chapel from also selecting their favorite conclave candidates and picking their papal ponies.

Betting on conclaves is nothing new, and has occurred since at least the 16th century. The 1549-50 conclave offers the greatest insight into such wagers, said author Frederic J. Baumgartner in his book Behind Locked Doors: A History of the Papal Elections.

At that conclave, which lasted 72 days, bets ranged from the eventual pope to whether one would be elected at all. Italian Cardinal Giovanni Maria Ciocchi del Monte entered the conclave the favorite, at 20-to-100 odds, and eventually exited as Pope Julius III.

In his book, Baumgartner quotes the Venetian ambassador in Rome saying, “ It is more than clear that the merchants are very well informed about the state of the poll, and that the cardinals’ attendants in Conclave go partners with them in wagers, which thus causes many tens of thousands of scudi to change hands.” Reports had one bookie making as much as 20,000 scudi in wagering.

In 1591 Pope Gregory XIV attempted to end such wagering, by issuing a papal bull threatening excommunication for those betting on papal elections, cardinal appointments, and the length of a pope’s reign.

Back in present times, numerous outlets began taking bets on the next bishop of Rome as soon as Pope Benedict XVI announced his resignation Feb. 11. One of the leading bet-takers has been Paddypower.com, Ireland’s largest online bookmaker, more known for its standard gamut of sports-related bets than papal odds.

As of March 8, their odds place Cardinal Angelo Scola (3-1) as the favorite, after Cardinal Peter Turkson of Ghana (7-2) had held the spot for more than a week. Out of the gate, Canadian Cardinal Marc Ouellet stood as the pack leader (5-2, on Feb. 11; currently 10-1).

The probabilities for other cardinals (as of March 8) include:

Among American cardinals, Timothy Dolan of New York leads with 20-1 odds, followed by Sean O’Malley of Boston at 33-1. Raymond Burke, current head of the Apostolic Signatura, comes next at 80-1, with Donald Wuerl of Washington (150-1) and Francis George of Chicago (200-1) as the long-shot Americans.

The site also offers various prop — or pope, perhaps — bets, including the next pontiff’s papal name (“Pius” leads, at 9-2; “Peter” has even odds), nationality (Italy, 4-6) and age (65 or under, 13-8), along with the length of the conclave, the number of ballots it will take, and suggesting a trend, whether the next pope resigns as well.

By the way, since the conclave is considered an election, it is illegal for Americans to place bets while inside the country, including through foreign-based websites. As a result, Las Vegas has not taken any bets or set any odds.

But to help those who can place bets, the site has made available numerous resources, including Irish Catholic editor Michael Kelly ranking his top 25 with his own odds. They also track top papal trends since 1513, such as zodiac signs (Pisces, Taurus and Aquarius round out the top three), age at election (15 percent were between age 61 and 65), and birth first name (13 Giovanni’s).

Aside from monetary betting, there are other ways to participate in the conclave:

Piggybacking on the popularity of online fantasy sports in America, Fantasyconclave.com asks visitors to pick their pontiff-to-be, the day of his selection and his new name. Free to enter, the contest is offers a cache of prizes — including a life-size Benedict cutout — for the winner, and daily “pope facts” emails for all participants.

Religion News Service has garnered much attention for its Pope Madness “Sweet Sistine” tournament, college basketball-style bracket, allowing readers to select between 16 cardinals from four geographic regions. With 22,000 votes cast, the field has narrowed to its final four, pitting Ouellet against de Aviz in the east, and Scola against Cardinal John Onaiyeken of Nigeria in the west.

NCRonline.org has been hosting the “Conclave of the People of God,” which has asked readers to select from the pool of 117 cardinals who they think will ultimately sit atop St. Peter’s Throne. Voting in the third round ends Friday, and from that field of 10 choices, the top five will advance to the final round.

For those looking for an alternative to voting and speculation altogether, Adoptacardinal.org randomly assigns users a cardinal to support through prayer before, during and after the conclave.

Vatican | With conclave looming, all bets are on