Editorial: What we celebrate about this pontificate 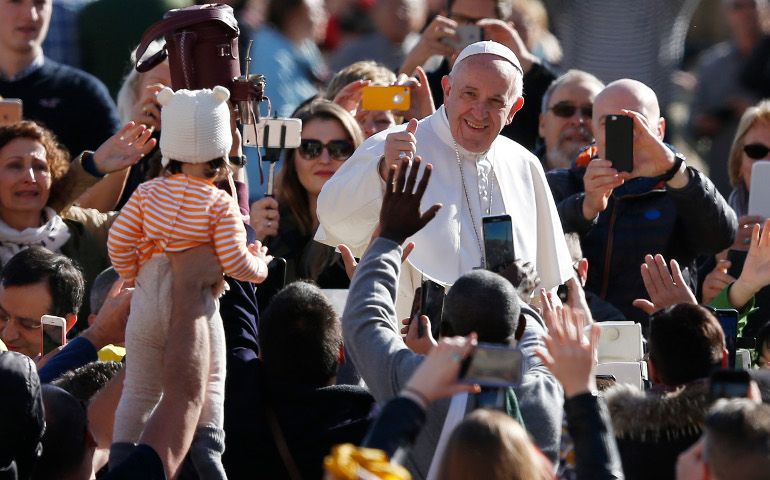 Pope Francis greets the crowd during his general audience in St. Peter's Square at the Vatican March 1. (CNS/Paul Haring)
This article appears in the Four Years of Francis feature series. View the full series.

Anniversaries are good times to review and take stock. Marking the fourth year of Pope Francis’ pontificate is such a time, and looking back over these last four years, few things sum up the promise and frustration of this pontificate better than Amoris Laetitia (“The Joy of Love”), Francis’ reflection on marriage and family life in response to the Synods of Bishops on the family he called in 2014 and 2015.

Besides the specifics of what it says about marriage and family life, Amoris Laetitia reflects Francis’ vision of church. How it came about is as important as its message: Francis wrote it after reflecting on the proceedings of two synods built upon consultations with a wide variety of groups in the church. The synod organizers sent questionnaires to national bishops’ conferences around the world with instructions to consult widely.

We’ll concede that some of these consultations were perfunctory and, in most cases, they were rushed, so the process was not ideal. But even as flawed as the process was, it sparked the imagination of grassroots church groups around the world. Laypeople, religious and clergy joined in dialogue about what family means and how families can best be served.

The idea of using synods to inform the teaching body of the church was evident early in Francis’ pontificate. One of his early meetings with the various offices of the Roman Curia was with the council that organizes synods. Meeting council members in their own offices in June 2013, Francis described synods as “one of the fruits of the Second Vatican Council” and a structure “at the service of the mission and communion of the church, as an expression of collegiality.” He then suggested a synod on the family.

A month later in Brazil, meeting with Latin American bishops, he talked about reform of the church’s central bureaucracy, one of the mandates of his election. He told the bishops about “a need for increased collegiality and solidarity.”

What is needed, he said, is “not unanimity, but true unity in the richness of diversity.” That is the attitude Amoris Laetitia asks us to adopt, and that is the vision Francis has for the church.

When he opened the pair of synods in October 2014, he challenged the gathered bishops to “speak with parrhesia” — that is, candidly, boldly and without fear — “and listen with humility.”

Conversations begun months before in the consultations continued through the two synods. Speeches were made, position papers shared and books written.

Some argued for a faithful adherence to the long traditions of church teaching on questions about marriage, divorce and annulment; about couples and families in “irregular situations”; about how to embrace our family members who are gay, lesbian, bisexual and transgender; yes, about the nitty-gritty of family life in the early 21st century. Sometimes the discussions grew heated. But discussions happened, and they continue to happen at all levels of the church. (See Page 5.)

In the United States, while discussions have not happened at the national conference level, the U.S. bishops say they want individual dioceses to examine these issues.

For those disappointed by Amoris Laetitia, we offer the same advice we offered a year ago on its release: “We’d invite those who hoped for more not to become discouraged, because if Amoris Laetitia isn’t strictly revolutionary, it is certainly evolutionary. It does prod this pilgrim church, which has been sitting in wayside for 35 years, forward.” We believe that to be more correct than ever.

Our enthusiasm for the model that Amoris Laetitia gives us does not blind us to the challenges our church faces. Two examples of unjust situations that are stumbling blocks to the church’s mission are the bar on women from full ministerial participation in the church and our outdated, stagnant teaching on sexuality. We urge Francis to address these issues more robustly.

The most critical change the church must affect: Intransigence on clergy sexual abuse is the scandal that must be torn from the soul of the church root and stem, or talk of dialogue, discussion and discernment on any issue is but empty rhetoric.

With the exhortation, Francis is modeling a church membership in dialogue with itself and in the process of discernment. “The complexity of the issues that arose [at the synods and consultations that preceded them] revealed the need for continued open discussion of a number of doctrinal, moral, spiritual, and pastoral questions,” he wrote.

He said that “honest, realistic and creative” thinking by pastors and theologians “will help us to achieve greater clarity,” and he rejected both “an immoderate desire for total change without sufficient reflection or grounding” and a hard-line “attitude that would solve everything by applying general rules or deriving undue conclusions from particular theological considerations.”

“The Spirit guides us towards the entire truth,” he wrote. We must trust the Spirit, trust this journey and most of all trust ourselves. That is at the core of Amoris Laetitia and this pontificate, and that is what we celebrate this anniversary.

Editorial | Editorial: What we celebrate about this pontificate

Bishops, theologians gather to consider US implementation of 'Amoris Laetitia'