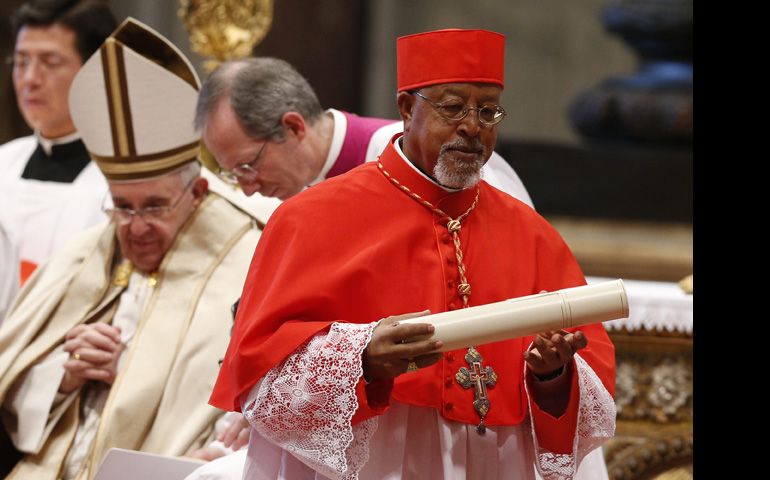 Cardinal Berhaneyesus Souraphiel of Addis Ababa, Ethiopia, carries his scroll after receiving his red biretta from Pope Francis during a consistory at which the pope created 20 new cardinals in St. Peter's Basilica at the Vatican Feb. 14. (CNS photo/Paul Haring)
This article appears in the Family Synod 2015 feature series. View the full series.

Vatican City — The ongoing worldwide meeting of Catholic bishops on family should reaffirm church teaching in certain areas but also focus on highlighting God's mercy and withholding use of condemnatory language, Ethiopia’s cardinal and the leader of east Africa's regional bishops' conference has said.

Cardinal Berhaneyesus Souraphiel said the meeting -- known as a Synod of Bishops and taking place in Rome from Oct. 4-25 -- should identify the position of the church “without condemning anybody with different views."

The synod, Souraphiel said, should focus on "pointing out the position of the Catholic church clearly as it is." But the church, he said, "is also merciful [and] would accept prodigal sons and daughters who have run away from the church but want to come back.”

The church can show mercy today "just like Jesus did, by listening to [people] before judging them and showing the love of God to them," said the cardinal. It should also give people space to think about their lives, he said.

"Time is also very important -- for people to get time for reflection, time for prayer, time to come back to be with God," said the cardinal. "Because it is only through the action of the Holy Spirit we feel true conversions come.”

Souraphiel, who is attending the synod in at least three separate roles, spoke in an NCR interview Thursday.

The Ethiopian focused the interview on what he plans to say to the some 270 prelates gathered for the synod and how bishops attending from Africa see their role in the discussions. He also spoke about how he hopes the synod might end, and what he is most looking forward to during Pope Francis' November trip to three African countries.

Souraphiel said he has chosen to use his three-minute address to the synod gathering to speak about the continuing refugee and migration crisis impacting his region. He said his country alone is dealing with some 500,000 refugees from Somalia, South Sudan, and Eritrea.

"It’s not a new thing, this migration," said the cardinal. "In Europe, because they see some influx of people they see these people in some areas as a danger for their own existence."

"But migration has always been there in history," he said. "It all depends how people look at it, and how people receive migrating people."

Souraphiel also said that he and other African prelates want to be able to speak to the synod on behalf of their people with their own voice, and not through others. He said he remembered Pope Benedict XVI telling Africans during his 2009 visit to Cameroon and Angola that they have a "big responsibility."

"You are the spiritual lung of the world, and you have values," the cardinal recounted the retired pope's message. "And you should protect the values you have and transmit those values to the next generations."

“Since that time, Africans have been looking upon themselves and finding out their own values -- to share amongst themselves and also to protect [them]," said Souraphiel. "And, indeed, Africa now is having its own voice."

Asked about one conversation known to be taking place at the synod -- whether the church should use more inclusionary language when speaking of gay people -- the cardinal said that many Africans are focused on other issues.

"The issues in Africa are poverty, migration, people dispersed, war ... and degradation of the environment," said Souraphiel. He also mentioned foreign companies that practice mineral extraction in African countries, leaving local communities without adequate benefit from the work.

Such work, he said, often leaves many people displaced from their traditional homes, even having to seek shelter in forests.

"It is only the church which is present with them, whether it is sisters, or brothers, or fathers who are there with them -- just to be with them, even if they cannot do much," said the cardinal. "To share their sorrow."

"We feel we don’t condemn people," said Souraphiel, speaking of the issue of inclusionary language. "Just like Jesus spoke to the Samaritan woman, or to the woman who was caught in adultery -- to listen and to hear what is being done."

Francis will be visiting three African countries from Nov. 25-30: Kenya, Uganda, and the Central African Republic. Souraphiel said he would greet the pope in Kenya and Uganda on behalf of his regional bishops' conference, which includes both countries.

“People are already very eager to meet him because they saw the visit he had in the United States and Cuba," the cardinal said of the upcoming visit.

"We might not do it at that grand level," said Souraphiel. "But he was a point of unity and he went not also as a great professor or teacher. He went as a pastor, as a father. I think that aspect of his humble and simple approach to people will be very much appreciated in Africa.”

Vatican: Pope reminded Synod that divorced and remarried not only issue

Prelates: Synod document is the fruit of Vatican II spirit

Vatican: Synod will be 'original and innovative,' but with limited public information