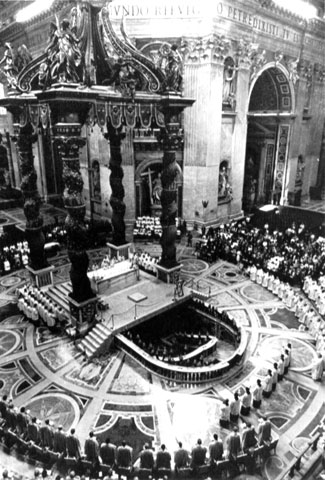 Pope John Paul II celebrates a Mass in St. Peter's Basilica to open the Synod of Bishops on the laity in 1987. (CNS/UPI/Reuters)

If bishops around the world want to follow a Vatican directive to listen "as widely as possible" to Catholics' views on issues like contraception, same-sex marriage and divorce before next year's synod, they may have to get to work very quickly.

Organizing such an effort, said several coordinators of bishops' previous attempts to engage in wide-range listening, takes time, dedication and a sincere desire to listen to the everyday experiences of Catholics -- regardless of whether their viewpoints fall outside the bounds of strict adherence to church teaching.

It also depends on the ability of those doing the collection of the data to sort it and then find ways to interpret what it means.

"Just from a data-processing point of view, it's massive," said Tom Quigley, a former staffer at the U.S. Conference of Catholic Bishops who helped coordinate the American prelates' preparations for the 1997 Synod of Bishops for America.

"I know there does not exist that kind of capacity as yet in the Vatican," said Quigley, who served from 1964 to 2007 as the bishops' policy adviser on Latin American and Caribbean affairs.

"They're going to have to create some kind of system to coordinate all that stuff if they intend to receive it all, check it in and process it in some fashion," he said. "It's going to be huge."

Dolores Leckey, a former U.S. bishops' staffer who spearheaded their preparations for the 1987 Synod on the laity, said preparations for that event unfolded over two years and included listening sessions held by priests and bishops in parishes across the country and wide submission of suggestions on the topic to the bishops' national office.

"You have to have a process that's going to try to get as much input from people as you can," said Leckey, head of the U.S. bishops' Secretariat for Family, Laity, Women and Youth from 1977 to 1997. "And you'd have to have people who are going to give a good bit of time to that."

Leckey and Quigley spoke in interviews regarding the Vatican's request for the world's bishops to survey Catholics on how certain topics affect their lives in advance of a global meeting of prelates for next October.

Called by Pope Francis for Oct. 5-19, 2014, the meeting is to focus on the theme of "pastoral challenges to the family in the context of evangelization."

Archbishop Lorenzo Baldisseri, the secretary of the Vatican's Synod of Bishops, sent a letter to heads of bishops' conferences globally Oct. 18, asking that they distribute it "immediately as widely as possible to deaneries and parishes so that input from local sources can be received." The letter, first reported by NCR, asks the conferences to quiz their populations on sometimes controversial topics in advance of the synod.

While Vatican statements left unclear just how widespread the Vatican meant for the consultation of lay Catholics is to go, those who have worked to undertake such efforts before said bishops need to move quickly if they intend to sincerely listen to lay voices.

Bishops across Africa took nearly five years to prepare for a 1994 synod, which was focused on the needs of their continent, said Maryknoll Fr. Joseph Healey, a missionary in East Africa since 1968 who has previously led the social communications office of the Association of Member Episcopal Conferences in Eastern Africa.

When Pope John Paul II announced that synod in 1989, Healey said, bishops in East Africa immediately duplicated its preparatory documents, translated them into English and Swahili, and asked for parishes to host discussions on the various topics.

Healey said that it was because of that response that some 40 of the 54 African countries were able to collate responses from parishes for use in the 1994 synod.

Fr. Laurenti Magesa, a prominent Tanzanian theologian and priest of the country's Musoma diocese, said he and two other priests went parish to parish at their bishop's request to listen to the needs of parishioners.

"It wasn't something that was sent in written," said Magesa, who is now a professor of moral theology at Hekima College, a Jesuit school of theology in Nairobi, Kenya. "We listened to the people and we recorded their answers."

Leckey said the U.S. bishops decided to undergo the two-year preparation for the 1987 synod when that gathering, originally scheduled for 1986, was pushed back a year.

"That was not the expectation," Leckey said. "The expectation at the Vatican was that the bishops and their consultors would answer the questions. ... But our people at the conference of bishops decided we're going to go to the people."

To start that consultation, the bishops' committee put together a questionnaire about the synod for bishops to distribute to their parishes, Leckey said, and also held regional meetings across the country with the four U.S. bishops elected by the conference to attend the synod.

Those bishops -- Archbishop John May of St. Louis, Archbishop Rembert Weakland of Milwaukee, Cardinal Joseph Bernardin of Chicago and Bishop Stanley Ott of Baton Rouge, La. -- then used the material they had gathered in making their presentations at the Vatican synod, Leckey said.

The former bishops' staffer said she also wrote two articles for Catholic News Service encouraging people to respond to the questions, which she said numbered at about a dozen. In response, she said, some people wrote to her, sometimes filling notebooks with their responses.

"They just filled them," she said. "One person said nobody ever asked me this before. And that became something that the bishops really picked up on: 'Why have we not been asking?' "

Weakland, she said, used some of the material to make interventions at the synod on the role of women in the church and asked specifically about the possibility of women serving in the Vatican's central bureaucracy or in its diplomatic corps, saying positions in those areas do not require ordination to the priesthood.

The effort at consultation from the U.S. bishops came as the American prelates had been undergoing an extensive experiment in consultative processes.

Drafting for the bishops' 1983 pastoral letter, "The Challenge of Peace: God's Promise and Our Response," and 1986 pastoral letter, "Economic Justice for All," included contributions from dozens of Catholic groups and involved listening sessions at national and regional levels.

Taking lessons from her experience in the 1980s, Leckey said the U.S. bishops today should "try to get people to talk about what their life is like, what are their problems, what do they need from the church, what's the major pastoral issue for them."

"If, in truth, the parish, as an agent of the church, is there to help people along the way, I would want to find out what is it that they perceive they need," she said.

Leckey also recommended that the American prelates consult with organizations like the National Association of Catholic Family Life Ministers and the Canon Law Society of America to collate and interpret their survey data.

One of those groups has already offered to help.

Mercy Sr. Sharon Euart, executive director of the Canon Law Society of America, said her organization would be "happy to assist the bishops in this task."

"Several of the issues identified in the document have canonical implications," said Euart, referring to Vatican's Oct. 18 questionnaire.

"In order to have a full picture not only of what people are feeling or what people would like to see changed, perhaps consulting the canon law society or its members would help the bishops identify what the current law is as well as possible changes that might be called for," she said.

For Magesa, the preparation across his continent for the 1994 synod led to a shift in Africans' perspectives in how to take part in the church.

When they first started having conversations at parishes, he said, people were hesitant to share their opinions and feelings.

"People didn't want to talk about the church," he said. "Their argument was that we the clergy, the leaders, had always told them what to do. They didn't see any reason why we should go back to them and ask them about how the church should be."

After some time, however, Magesa said people "began to see that the church is theirs, that they own the church."

"From that initial resistance, there was openness," he said. "They began to use the pronoun our church. For me, that was a very important development."

A version of this story appeared in the Nov 22-Dec 5, 2013 print issue under the headline: 'Huge' job, short time.