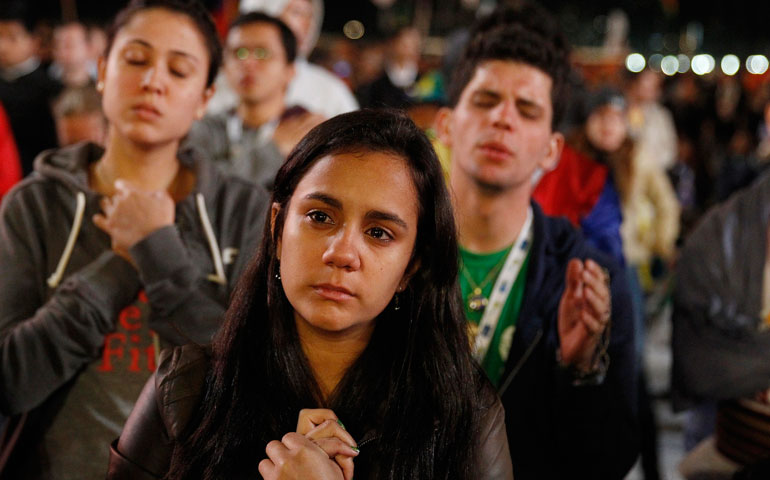 Physically speaking, Pope Francis made only one July 22-28 trip to Brazil to mark the Catholic church's World Youth Day. Existentially, however, the outing was so rich in content that it was actually more akin to four trips in one.

First, there was the trip as experienced by locals and throngs of young pilgrims, which is where "Francis-mania" was in full view. The crowds were so frenzied on the opening night that the pope's motorcade got derailed, and later groups rushed the pontiff like teenagers at a Justin Bieber concert.

A concluding youth vigil and an open-air Mass each drew more than 3 million people to Rio's Copacabana beach, which was redubbed "Popacabana" for the occasion. As Reuters put it, for one remarkable weekend bikinis gave way to rosaries on the world's most famous stretch of sand and surf.

By the trip's end, Francis acknowledged that he probably gave his security personnel heart tremors by exposing himself so completely to the crowds. It was a little crazy at times, he said, but "I like this craziness."

Second, there was the trip of political and social gestures intended to make a point, the highlight of which was Francis' July 25 visit to a favela, or slum, called Varginha, where Francis unambiguously told the poor, "The church is with you!"

Government statistics say that roughly 11 million Brazilians live in favelas such as the one Francis visited, representing 6 percent of the national population and the very poorest of the poor. The pontiff held up these people like a mirror to the national conscience.

"The measure of the greatness of a society is found in the way it treats those most in need, those who have nothing apart from their poverty," he said.

Francis' most explicitly political message came July 24 during a visit to a hospital for alcohol and drug addicts, in which he came out against legalization of drugs and blasted traffickers as "dealers of death."

In the context of recent moves in several Latin American nations to seek a truce in the war on drugs, it was a line with some bite.

Third, there was the trip addressed to Catholic insiders, intended to lay out a blueprint for the church's pastoral mission. The high point at that level came in two lengthy speeches over the weekend, one delivered July 27 to Brazil's bishops and a second the next day to the coordinating committee of the Episcopal Conference of Latin America (CELAM).

Those speeches found Francis at his most bracingly honest. He prodded the bishops of Brazil to search their souls for answers to why so many Catholics have defected to evangelical and Pentecostal sects. He called the church across Latin America to a new burst of missionary energy rooted in both internal renewal and dialogue with the "world around us," learning to speak its various languages.

Probably the key idea came when Francis urged the church to speak out of the "grammar of simplicity," using terms ordinary people can readily grasp and that connect with their faith -- especially as expressed in Latin America's rich tradition of popular devotion.

Fourth, there was the trip as experienced and reported by the media, the apex of which came with the pope's free-wheeling press conference aboard the papal plane from Rio to Rome July 28.

The banner headline was his comment on gays: "If they accept the Lord and have goodwill, who am I to judge them?"

Yet the pope covered many other topics during that session, from abortion and women in the church to divorced and remarried Catholics, with the full transcript running to almost 10,000 words.

Perhaps the single most important word in the exchange was "mercy," as Francis argued the present moment is a kairos, a time when it's especially important to project a merciful and compassionate face to the world.

This was Francis' first overseas journey as pope, and as debuts go, it was a whopper.

Heading into the trip there were fears that it might reignite Brazil's protest movement, which peaked in June with millions of people in the streets pushing back against perceived inequalities and corruption, objecting especially to spending on splashy global events such as the 2014 World Cup and the 2016 Summer Olympics.

Aside from a few scattered incidents, however, the trip was largely unmarred, and Francis walked a fine line. He applauded the thirst for justice among Brazil's young protesters, but was gracious with the country's embattled President Dilma Rousseff and even made a stop at the palace of Rio's mayor to bless the banners for the 2016 Olympics.

The 76-year-old pontiff displayed remarkable stamina, trimming the two days of rest that had been planned for Pope Benedict XVI to one in order to travel July 24 to the Marian shrine of Aparecida.

The pope used his one day off on July 23 to hold a business meeting with Cardinal Oscar Rodríguez Maradiaga of Honduras, the coordinator of a new council of eight cardinals to advise the pope, to talk about Vatican reform.

The biggest crowds of the Brazil trip came July 27 and 28, when Francis took part in a nighttime youth vigil on Copacabana beach and during World Youth Day's concluding Mass. Local officials said each event drew more than 3 million people, shattering the previous record at Copacabana set by a Rolling Stones concert in 2006 that was estimated to have attracted around 1.5 million.

Though the Brazil swing proved that Francis' act plays just as well on the road as it does in Rome, it may be a while before he repeats the performance.

During his press conference, he said he's planning a Sept. 22 trip to Cagliari in southern Italy to visit the shrine of Our Lady of Bonaria, a Marian title that led to the name of the pope's hometown, Buenos Aires, and an Oct. 4 trip to Assisi, Italy, for the feast of St. Francis. But there were no definite plans for travel outside of Italy.

Francis said he'd like to go to Jerusalem sometime in 2014 to meet Patriarch Bartholomew of Constantinople, and said he "must" go to Asia, perhaps Sri Lanka or the Philippines. He said he didn't think he'd be back to Latin America anytime soon.

If Francis does go to the Philippines, the trip could be a barnburner. When Pope John Paul II visited Manila in 1995 for World Youth Day, he drew a crowd for the final Mass estimated at 4.5 million to 5 million people, still the record for turnout at a single papal event.

Given the way Francis is profiling as another magnet for humanity, a visit to Manila might just put that record to the test.

A version of this story appeared in the August 16-29, 2013 print issue under the headline: Francis in Brazil a tale of four trips.