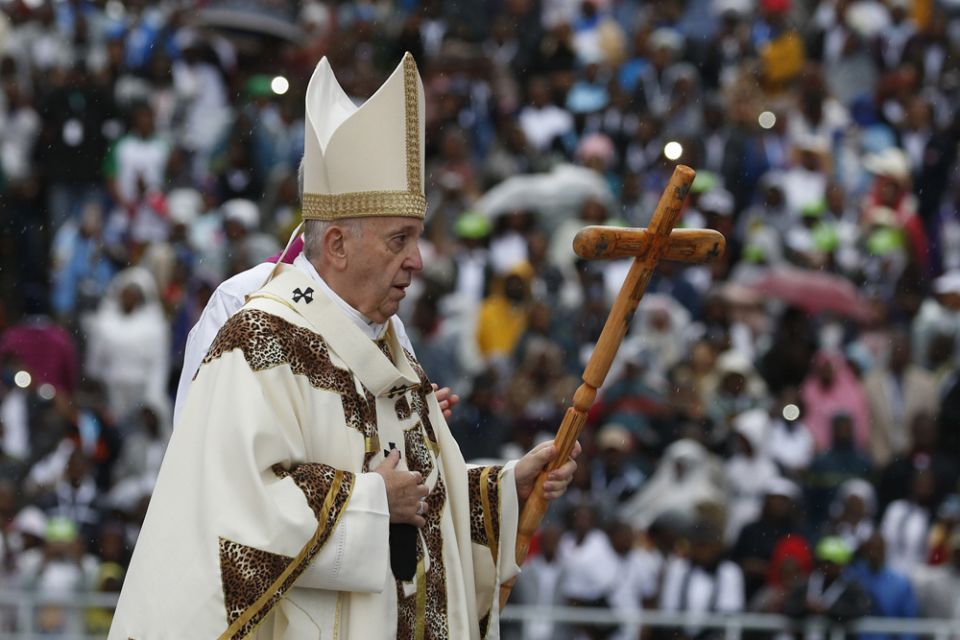 Pope Francis walks in the entrance procession as he celebrates Mass in Zimpeto Stadium Sept 6 outside Maputo, Mozambique. (CNS/Paul Haring)

In a homily for a Mass with tens of thousands on the outskirts of Maputo, the pontiff called it "paradoxical" that while Mozambique is known for plains that favor agriculture and a variety of mineral resources that about half its population lives in poverty.

"At times it seems that those who approach with the alleged desire to help have other interests," the pope told the Massgoers, assembled at an open-air stadium under pouring rain.

"Sadly, this happens with brothers and sisters of the same land, who let themselves be corrupted," said Francis, adding: "It is very dangerous to think that this is the price to be paid for foreign aid."

Francis, who is visiting Mozambique as part of a three nation Southern Africa tour, did not specify a particular issue, but the Mozambican government recently charged a former president's son and 19 others on corruption, fraud and blackmail with regards to a $2 billion loan scandal.

The scandal, which involved the bilking of hundreds of millions from loans for maritime security and other projects, is also being probed by the U.S. Department of Justice, as it included use of U.S. banks.

Corruption in Mozambique, which is to the northeast of South Africa on the southern tip of the African continent, is considered the worst in the region. In a recent Afrobarometer corruption survey, one in four Mozambicans said they had to pay a bribe in the last year to obtain government services.

The rate of poverty is also high for the region, with the World Bank estimating that about 48 percent of the population of 27 million live without what they need.

Francis' was due to leave Mozambique later Sept. 6, heading to Madagascar, about 750 miles east in the Indian Ocean. On Sept. 9, the pope will make a one-day trip to the small island of Mauritius, before heading back to Rome on Sept. 10. 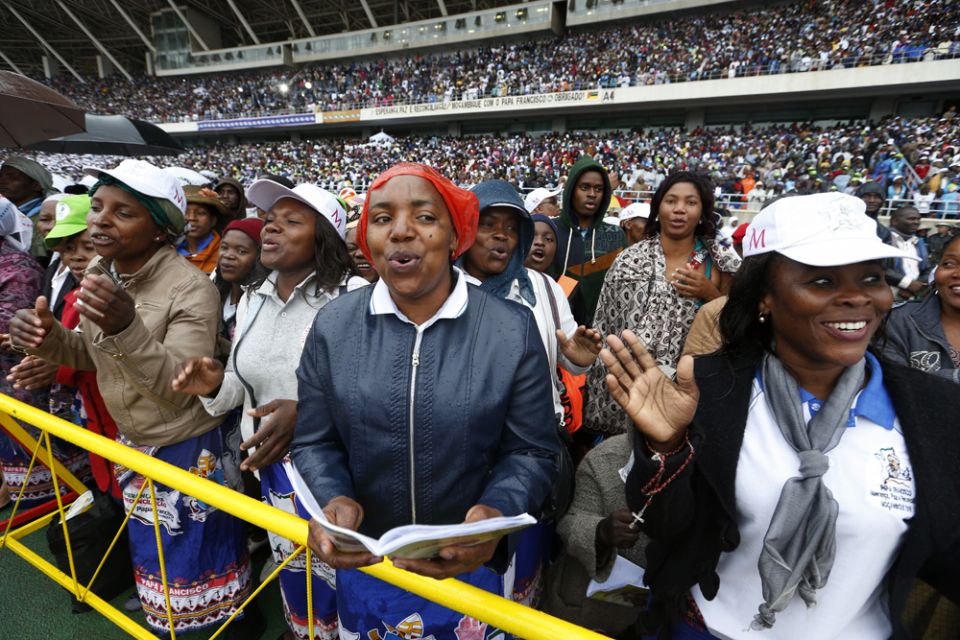 Eric LeCompte, the leader of Jubilee USA, a network of religious and development groups that argue for international debt relief, praised the pope's choice to visit the three countries. He said each have been dealing with separate corruption scandals.

"Pope Francis is extremely concerned with the cost of corruption on the poor," LeCompte told NCR.

"In Laudato Si', Pope Francis also calls foreign debt a tool of rich countries to control poor countries," he said, citing the pontiff's 2015 encyclical letter. "Mozambique and Madagascar are examples of this as they struggle with debt crises … natural resource theft and high poverty rates."

Francis also focused in his homily on encouraging Mozambicans who experienced violence during the country's 15-year civil war or the conflicts afterward to emulate Jesus in showing an "active, impartial and extraordinary benevolence towards those who have hurt us."

"Jesus wants to end forever that common practice of being Christians yet living under the law of retaliation," said the pontiff. "We cannot look to the future, or build a nation, an equitable society, on the basis of violence."

Earlier in the day Sept. 6, Francis made a brief visit to a medical center and HIV/AIDS clinic, where he met with patients and thanked the doctors and medical staff for their work.

The clinic, run by the international Community of Sant'Egidio, is the only private health care facility in Mozambique that provides free care. Hundreds of its staff and people from the neighborhood crowded a small outdoor space in the rain, wearing multicolored ponchos as they tried to see the pontiff.

About 12.6 percent of Mozambique's adult population, or about 2.2 million people, are living with HIV, according to the Joint United Nations Program on HIV and AIDS.

Positioned directly in front of Francis during the visit was a line of mothers, each carrying a baby in front of them. The pope greeted several of them at the end of the visit, touching the faces of the children and smiling at the mothers.

Nelson Moda, a provincial representative for the Sant'Egidio Community in Mozambique, said the visit had special meaning, as it was the only moment during his time in the country that Francis directly encountered the poor.

"I think it has got a great significance … to show the charism of Pope Francis," said Moda.

In brief remarks at the clinic, Francis related the work of its staff to that of the good Samaritan, who stopped to help an injured person on the side of the road.

"All of you who in various ways are part of this healthcare community [are] a sign of the heart of Jesus," said the pope.

A version of this story appeared in the Sept 20-Oct 3, 2019 print issue under the headline: 'Poverty is not inevitable!' .

The poor, needy are your treasure, pope tells Sant'Egidio Community