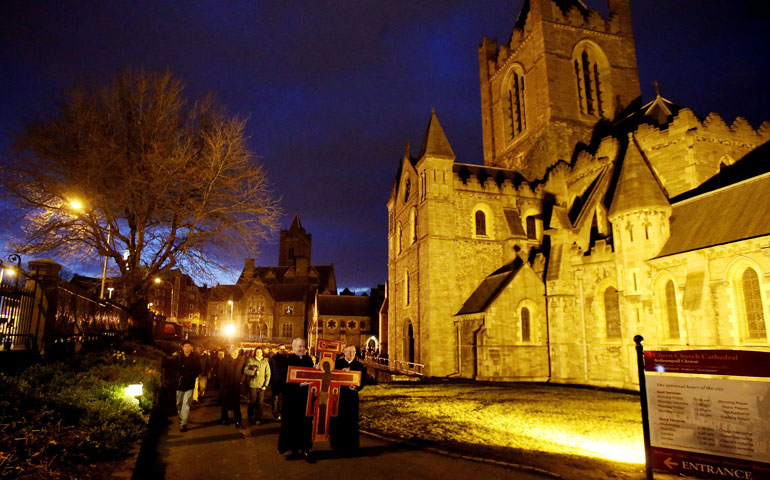 Reform-minded Irish Catholics say Pope Francis is unlikely to improve the reputation of the Roman Catholic church as inflexible and out of touch, especially among the young.

“The majority of young people would say they don’t hate the church,” said Dublin Archbishop Diarmuid Martin. “It’s just that the church is irrelevant to them.”

Though still a bastion of European Catholicism, Ireland has seen a significant decrease in the percentage of residents who identify as Catholic. In 1920, nearly 93 percent of the Irish population described themselves as Catholic, according to census data. By 2011, that number had dropped to 84 percent.

Leaders of local church reform groups attribute the decline to clergy sex abuse scandals, rigid policies on social issues, and a refusal to support open discussion on controversial topics such as gay marriage and celibacy.

Martin, who toes the line between defending the church and hoping to change it, admits that the Irish Catholic community is in crisis but is optimistic about the new pope’s role in addressing that.

Martin said that he has met Argentine Cardinal Jorge Bergoglio, who became Pope Francis March 13, a few times and “I remember he was very interested in Ireland.”

Martin said the key element in returning Catholics to the church is fostering change on an individual level, which Francis may inspire through his simple living and subtle gestures of humility. Francis has already refused certain papal accoutrements that accompany his new status, such as wearing lavish vestments.

Catholic reformers, however, say that these gestures will make little real impact on Ireland’s laity. They’re calling for an overhaul of church culture and policy.

Brendan Butler, co-convener of the reform group We Are Church Ireland, said that Francis’ rejection of Vatican opulence is a step in the right direction but that the new pope will bring “absolutely no change” in the culture or policies of the church.

“There’s an awful lot that has to be undone, but no pope will undo what another pope has done,” Butler said. “This infallibility thing is the worst curse on the Catholic church.”

We Are Church considers the ordination of married priests and female priests, as well as the inclusion of divorced and gay lay members, to be key issues. According to Butler, a refusal to confront such issues has cost the church “a generation of Catholics.”

Jane Fallon Griffin is one young Catholic who has walked away from the church. Griffin was baptized, confirmed and even became a trained eucharistic minister at her parish. But her personal beliefs began to collide with the church’s position on gay marriage.

“One of my best friends is gay and I’d like for him to be happy and have the same opportunities I’m going to have in the future,” she said. “I don’t think the Catholic church is a church for everyone if [the church is] discriminating.”

The appointment of Francis will not likely lure Griffin back to the church, she said. His antigay stances in Argentina reconfirm her opinion that he won’t accept gay marriage.

Columban Fr. Sean McDonagh, a co-founder of the Association of Catholic Priests, says that opposition to gay marriage is just one issue that has alienated laypeople from the church. He wants to see a restructuring of church priorities, starting with teachings on sexuality.

“Catholicism is generally known for its positions on sexuality, abortion, same-sex relations, rather than its concerns about social justice,” said McDonagh, whose group seeks change in the priesthood. “If you read the New Testament, what Jesus had to say on sexuality is miniscule compared to what he has to say about power, money, corruption.”

McDonagh said he wants the church to focus on “the issues Jesus would be involved in,” such as poverty and financial inequality. He hopes Francis’ concern with the poor will influence him to redirect the church’s priorities.

There’s a danger in being too outspoken as a progressive priest. Nearly half of Ireland’s approximately 3,000 clergymen are members of the Association of Catholic Priests, but Redemptorist Fr. Tony Flannery, another of the group’s co-founders, made headlines earlier this year for refusing to allow the Vatican to silence him. After Flannery published reformist opinions on controversial issues like the ordination of women, the Vatican threatened him with excommunication (NCR, Feb. 1-14).

The double standard between the church’s disciplinary actions toward Flannery and the cover-ups of pedophile priests has not gone unnoticed by the Catholic reformers.

“There is a great fear, especially among priests,” Butler said. “And we’re tired of fighting.”

One reform that tops both McDonagh’s and Butler’s lists is the overhaul of the priesthood, including the ordination of female priests and the acceptance of married priests.

Other priests doubt the likelihood of achieving these goals. Female ordination, for example, falls under a stricter doctrine than married clergy.

“We have definitive teachings [including one on female ordination] that have an element of infallibility attached,” said Fr. Edward McGee of St. Mary’s University College in Belfast. “But then there are some that are fallible and could undergo change, such as married clergy or the age of confirmation.”

Even if change never comes, Butler says he will always call himself Catholic -- it’s a part of his identity. But the struggle to maintain the relationship isn’t always easy.

“We’re holding on by our fingernails,” Butler said of himself and his fellow reformists. “It’s like throwing pebbles at a wall. If enough people throw enough pebbles, maybe it’ll break down.”

[Paige Brettingen and Shweta Saraswat are graduate students at the University of Southern California Annenberg School for Communication and Journalism and part of the Knight Program on Media and Religion. Their reporting trip to Ireland was funded by the Knight Foundation and the Luce Foundation.]

A version of this story appeared in the April 12-25, 2013 print issue under the headline: Irish reformers skeptical about prospects for change.