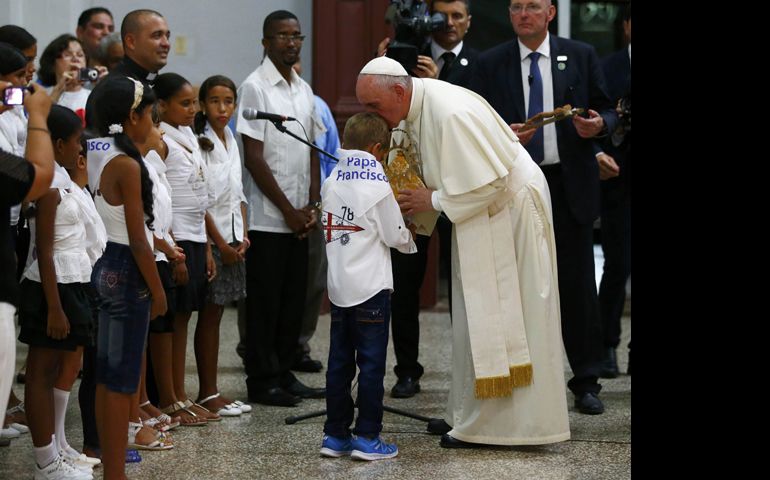 Pope Francis receives a gift from children at the shrine devoted to Our Lady of Charity in El Cobre, Cuba, Sept. 21. (CNS/Tony Gentile, Reuters)
This article appears in the Francis in Cuba feature series. View the full series.

Santiago, Cuba — Pope Francis called Cubans to a "revolution of tenderness" as he celebrated Mass in the Minor Basilica of the Shrine of Our Lady of Charity of El Cobre, the country's patroness.

While only about 60 percent of Cubans are baptized Catholics, the little statue of Our Lady of Charity, discovered 400 years ago, is also a widely recognized symbol of Cuban identity and of strength despite struggle.

Archbishop Dionisio Garcia Ibanez of Santiago, president of the Cuban bishops' conference, told the pope at the end of Mass, "Believers and nonbelievers consider her a clear symbol of Cuban identity because in her we see reflected the greatness yearnings and aspirations of our people."

Celebrating mass early Sept. 22 -- just a few hours before he was scheduled to fly to Washington -- Francis told Cubans, "Our revolution comes about through tenderness, through the joy which always becomes closeness and compassion, and leads us to get involved in and to serve the life of others."

Like Mary, who made haste to visit her pregnant cousin Elizabeth, the Catholic church wants to be with Cubans in their state of hope and expectation, "to build bridges, to break down walls, to sow seeds of reconciliation," the pope said.

In the hours before mass as the sun rose and roosters crowed, residents began to line the streets of El Cobre, a small town outside of Santiago.

"It's important that he's coming here because Pope Benedict and Pope John Paul (II) were also here. For us, it's an honor that the pope continues to recognize us," said Carlos Anaya as he leaned against a wooden barrier on the sidewalk.

Related: In Communist Cuba, Francis asks: 'Do you believe?'

Just before 8 a.m., Pope Francis circled the grounds of the shrine, where a several hundred people gathered wearing white baseball hats that were handed out at the entrance and chanted "Francisco! Francisco!"

"To be able to see him this close, it's amazing. It makes me feel hopeful," said Oleydis Gonzalez, who stood near the back of the crowd and tried to record Pope Francis on a smartphone.

The crowd waved Cuban flags and cooled themselves with hand fans that depicted Francis waving while standing in front of a Cuban flag. But there was little of the fanfare that greeted Francis in Havana and Holguin. At least 250 chairs in the back of the outdoor viewing sat empty.

Cuban President Raul Castro was present for Mass in the shrine; he also attended the Masses that the pope celebrated earlier in Havana and Holguin.

Throughout his Sept. 19-22 stay in Cuba, Francis preached the need to continue the official dialogue between the United States and Cuba, to heal hurt feelings existing between those who stayed in Cuba and those who emigrated and to ensure the nation's future -- no matter its economic and political system -- is marked by concern for the weakest and poorest members of society.

During the Mass in the packed shrine -- and with thousands watching from outside -- Pope Francis paid special tribute to Cuba's strong and steady grandmothers. They are the ones chiefly responsible for keeping the faith alive in the communist nation, he said.

The grandmothers, he said, "fostered, in the daily life of their homes, the living presence of God, the presence of the Father who liberates, strengthens, heals, grants courage and serves as a sure refuge and the sign of a new resurrection."

Grandmothers and mothers "kept open a tiny space" through which the Holy Spirit "continued to accompany the heartbeat of this people," the pope said.

The faith of Cubans, even if it is "small as a mustard seed," is ready to grow, he said.

At the end of the Mass, Pope Francis officially opened the celebration of a jubilee year to mark the 100th anniversary of Pope Benedict XV proclaiming Our Lady of Charity of El Cobre the patroness of Cuba. The celebrations will continue through Sept. 24, 2016.

Editor's note: Contributing to this story was Ezra Fieser in El Cobre.

Vatican | Pope calls for 'revolution of tenderness' in Cuba