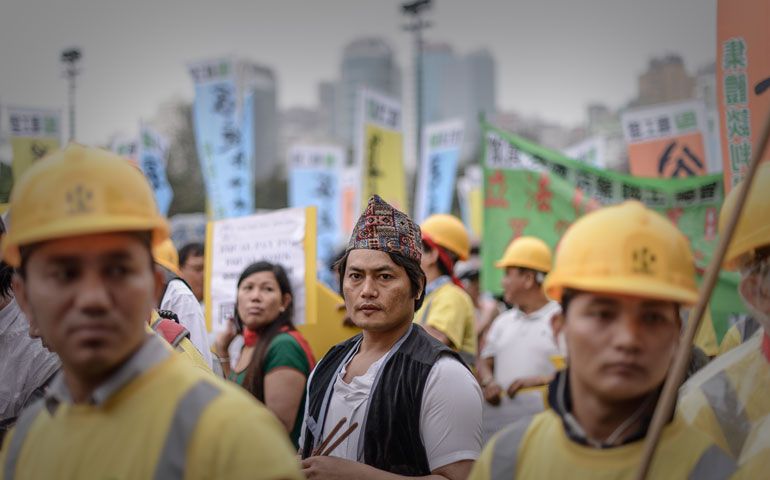 Migrant workers from Nepal take part in a Labor Day rally in Hong Kong on May 1. (AFP/Getty Images/Philippe Lopez)
This article appears in the Pope Francis feature series. View the full series.

Washington — U.S. Catholics on the front lines of social justice struggles expressed delight at Pope Francis' frequent references to caring for the poor, his trenchant remarks about "savage capitalism," and his calls for government intervention to pursue the common good in the face of hostile market forces.

"Quite frankly, it brings tears to my eyes," said Social Service Sr. Simone Campbell, executive director of the Catholic social justice lobby NETWORK. "It's been so long since one of our leaders brought the struggle of humanity front and center. It's a relief -- and a joy -- to see the Gospel being preached with such clarity."

In a May 16 audience at which he received the credentials of four ambassadors to the Holy See, Francis said:

The worldwide financial and economic crisis seems to highlight their distortions and above all the gravely deficient human perspective, which reduces man to one of his needs alone, namely, consumption. Worse yet, human beings themselves are nowadays considered as consumer goods which can be used and thrown away. We have started a throwaway culture. This tendency is seen on the level of individuals and whole societies, and it is being promoted! In circumstances like these, solidarity, which is the treasure of the poor, is often considered counterproductive, opposed to the logic of finance and the economy. While the income of a minority is increasing exponentially, that of the majority is crumbling. This imbalance results from ideologies which uphold the absolute autonomy of markets and financial speculation, and thus deny the right of control to States, which are themselves charged with providing for the common good. A new, invisible and at times virtual tyranny is established, one which unilaterally and irremediably imposes its own laws and rules.

The pope also criticized "corruption and selfish fiscal evasion" in his remarks. Three of the four countries whose ambassadors were present are known tax havens: Antigua and Barbuda; Luxembourg; and Botswana.

The following week, the pope visited a soup kitchen run at the Vatican by the Missionaries of Charity and again spoke forcefully about modern economic conditions, condemning "a savage capitalism [that] has taught the logic of profit at all cost, of giving to get, of exploitation without looking at the persons … and we see the results in the crisis we are living!"

John Carr, who worked at the U.S. Conference of Catholic Bishops for 25 years coordinating social justice issues and is now leading the new Initiative on Catholic Social Thought and Public Life at Georgetown University in Washington, noted that the content of Francis' teaching is in continuity with his predecessors.

"What are distinctive are his directness, urgency and passion. It's where he comes from and where he stands that makes a difference," Carr said. "His heart is with the poor; his feet were planted in the villas miserias [the Argentine phrase for shantytowns or slums] of Latin America. His mind is with the church and its constant teaching. This is why he is not a chaplain to ecclesial or ideological factions, but challenges all of us.

"The pope's message on the need for ethics in economic life is not conservative or liberal, but Catholic," Carr said. "It is not socialist or capitalist, but Christian. He calls for a church 'of and for the poor' that is not turned in on itself, but 'in the streets.' He has lived the church's social teaching in his own ministry so he speaks confidently and bluntly on its demands."

"It is not just his words, but his specificity," LeCompte said. He noted that the pope is using the same kind of language he used in Argentina, where, in 2001, he led the Argentine Bishops' Conference during that country's debt crisis.

"He uses a word like 'tyranny,' " LeCompte said. "You don't usually hear U.S. bishops talk that way." LeCompte was especially pleased that the pope focused on tax avoidance schemes in his remarks to the ambassadors. "For every $10 we give the developing world in aid, $15 leaves from the developing world in untaxed profits. These tax havens are part of the systematic injustice that harms the world's poor."

LeCompte noted that a bill is before Congress to address this injustice. The Stop Tax Haven Abuse Act was introduced by Congressman Lloyd Doggett, D-Texas, and has some 50 co-sponsors. The legislation would require country-by-country reports on tax havens. According to LeCompte, another bill will soon be introduced that focuses on enacting responsible lending practices.

Like Carr, LeCompte said the new pope is picking up where his predecessors left off. He notes that his organization began in response to Pope John Paul II's call for ameliorating the public debt of undeveloped nations during the Jubilee year 2000. LeCompte cited favorite passages from Pope Benedict XVI's encyclical Caritas in Veritate. But he added, "Pope Francis is so much easier to understand."

Stephen Schneck of The Catholic University of America in Washington said he sees Francis combating some of the most deeply held beliefs among certain Catholic conservatives.

"In America, a very scary error confuses Adam Smith's invisible hands with God's plan," Schneck said. "Pope Francis powerfully rejects that error. An autonomous market can never be moral in itself. Free market forces are faceless, are without conscience, are unrestrained by anything other than their own competitive materialist dynamics, and thus are incapable of bearing moral responsibility. Without regulation or guidance, market forces can easily work against the common good."

"Pope Francis' point is that governments -- unlike free markets -- really are moral agents, bear responsibility, and are obligated to work for the common good," Schneck said. "Governments have a moral responsibility to regulate market forces for the common good. Many American conservatives are not going to like what the pope has been saying about market forces and government, but Pope Francis is holding fast to traditional church teachings, the provenance of which stretches to Pope Leo XIII's Rerum Novarum [1891] and ultimately to the apostles."

Meanwhile, Catholic conservatives have gone mostly radio silent on the pope's recent remarks about "savage capitalism." The conservative Acton Institute, which promotes a less regulated market, linked to an article by Phil Lawler at CatholicCulture.org. Lawler wrote, "A powerful argument can be made that capitalism, tempered by a Christian moral framework, is the best available solution to the problem of poverty. Nothing that Pope Francis said -- nothing that any Pope has said -- would rule out that approach. ... To be sure, the teaching magisterium has been critical of the excesses of capitalism, and of capitalism raised to an all-encompassing ideology."

But Francis did not mention anything about excesses.

At wedding, pope says spouses make each other better men and women