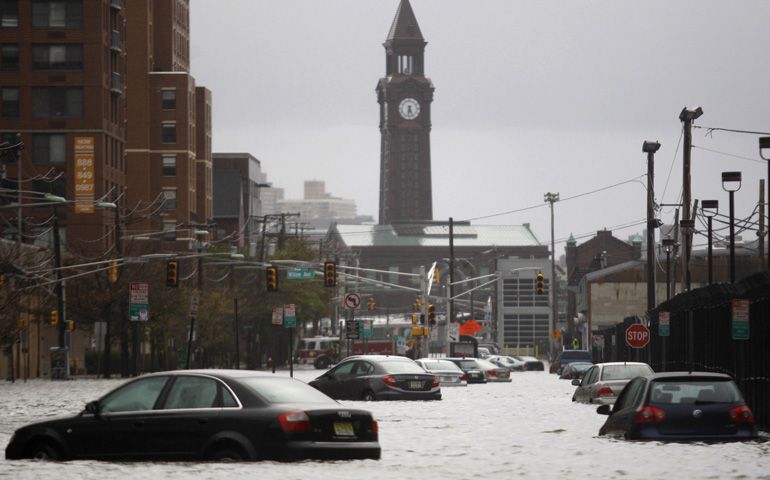 Cars are seen on a flooded street Tuesday after Hurricane Sandy sweeps through Hoboken, N.J. (CNS/Reuters/Eduardo Munoz)
This article appears in the Hurricane Sandy feature series. View the full series.

Vatican City — Pope Benedict XVI expressed his concern for everyone affected by Hurricane Sandy and encouraged all those working to rebuild from the disaster.

"Conscious of the devastation caused by the hurricane which recently struck the East Coast of the United States of America, I offer my prayers for the victims and express my solidarity with all those engaged in the work of rebuilding," he said Wednesday at the end of his weekly general audience.

Almost 1,000 miles wide, Sandy's strong gales reached to the Great Lakes. As of Wednesday, it caused at least 55 deaths in seven states and left more than 8.5 million homes and businesses without power from the Carolinas to Ohio.

In the Caribbean, government officials put the death toll across the islands at 69, with more than 50 in Haiti, where widespread flooding devastated parts of the already impoverished country.

After reciting the Angelus on Sunday, the pope called for prayers and concrete help for the people of Cuba, Haiti, Jamaica and the Bahamas, where, he said, the hurricane struck "with particular violence."

During his main audience talk Wednesday, the pope underlined the importance of the church in preserving and passing on the faith across generations and throughout history. About 10,000 people gathered under the rain in St. Peter's Square to hear the pope's catechesis.

Although finding Christ is an intensely personal experience that transforms one's own heart, mind and individual existence, "faith is given in and through the community of the church," the pope said.

The Creed and one's beliefs are not built upon a "private dialogue with Jesus," but are the result of a dialogue and a listening that shatter individualism and open one up to God's love and to others, he said.

"Faith comes to me given as a gift from God through a community of believers, which is the church," he said.

People discover through baptism that they are not only united to Jesus, "but also to all those who walked and are walking the same path" toward holiness.

"Our faith is truly personal only if it is communal: It can be my faith only if it lives and moves in the 'we' of the church, only if it is our faith, the common faith of the one church," the pope said.

It is important to remember that faith is born in the church and leads people to the church, he said; "No one can have God as Father who does not have the church as mother."

Tradition is "an uninterrupted chain of the life of the church, the proclamation of the Word of God and the celebration of the sacraments that reaches us" from the past, he said.

Tradition is what "gives us the guarantee that that which we believe in is the original message of Christ, preached by the Apostles," he said.

This way, every man and woman from every generation and every continent can have access to the "immense resources" of sacred Scripture and the faith, and "enrich themselves from the treasures of grace" given to humanity by God, the pope said.

In fact, the Second Vatican Council's Dogmatic Constitution on the Church, "Lumen Gentium," reminded people that God doesn't seek to make people "holy and save them merely as individuals, without bond or link between one another. Rather has it pleased him to bring men together as one people, a people which acknowledges him in truth and serves him in holiness."

By radiating the truth of the church, each person becomes a point of reference for others by passing on the person of Jesus and his message, Pope Benedict said.

Only by "letting oneself be guided and molded by the faith of the church," Christians, who despite their weakness, limits and difficulties, become "like an open window" that lets God's light shine on the world.

Keeping one's faith closed up inside oneself contradicts the very nature of faith, the pope said.

"We need a church in order to have confirmation of our faith and to experience the gifts of God: his word, the sacraments, the support of grace and the witness of love," he said.

In a world of rampant individualism which only weakens human relations, "faith calls us to be church, carriers of love and of the communion of God for all humanity," he said.

Pope Francis is unsettling -- and dividing -- the Catholic right