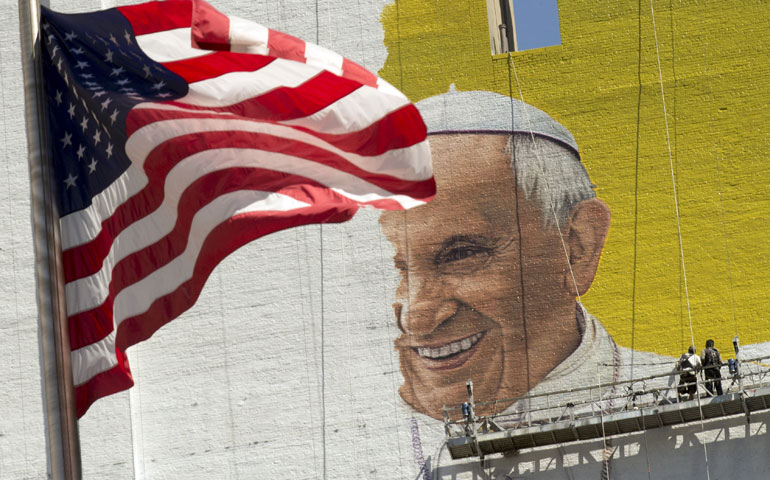 On Aug. 28, workers paint a 220-foot-tall mural on Eighth Avenue in New York announcing the visit of Pope Francis to the city Sept. 22. (Newscom/Polaris/Jonathan Sciortino)

As the page on the calendar flips from August to September, the atmosphere at the Vatican normally changes drastically. Italians return after long summer escapes from stifling heat, and the day-to-day work of the church bureaucracy returns to its normal, if somewhat languid, pace.

This year, however, the atmosphere has changed much more than usual. Just below the surface of that bureaucratic calm, papal advisers are in a bit of a flurry.

There is a real sense that the coming two months will be defining for the Francis pontificate, especially for those following from the United States.

After a well-received visit to three Latin American countries in July, Pope Francis is preparing a late September visit to Cuba and the U.S. that offers plenty of rough water for a papacy that hasn’t shied from criticizing politicians, bankers and bishops.

Throughout his teachings -- from daily homilies at Casa Santa Marta to his latest encyclical -- Francis has directed sharp words at a free-market system that doesn’t consider the needs of the poorest, at bishops who worry too much about being what he calls “doctors of the law,” and at politicians who seek their own benefit rather than that of the common good.

Francis will encounter Americans in Washington, New York and Philadelphia Sept. 22-27. Then, only six days after landing back in Rome, he will convoke what has the potential to become the signature event of his pontificate: the three-weeklong second edition of the Synod of Bishops on family life issues.

As it did during the first edition of the meeting in 2014, U.S. media attention is likely to focus on the more controversial aspects of the prelates’ discussions: whether there should be some sort of change in church practice toward divorced and remarried Catholics; and how the bishops address same-sex unions.

The waters, indeed, are rough. Should there be some misstep in the U.S. trip, it would surely leave a long-lasting impression, perhaps even one that would color or change the pope’s nearly universally positive standing among the country’s 69 million Catholics.

Then there is October’s synod, the result of a massive two-year undertaking involving unprecedented calls for global input that solicited the thoughts, feelings and hopes from Catholics across the globe.

Millions are looking to the event for some sort of positive direction for how the church engages the struggles of modern families. What happens should the bishops’ discussions come to no conclusion, or worse, devolve into fighting, possibly based on regional differences?

The very real possibility of divisive debates on the synod floor, with fault lines emerging mostly based on the cultural and regional differences of the synod participants, has been showcased recently with the publication of several books trying to set the tone in advance of the discussions.

In one book, to be released Sept. 15 by Ignatius Press, 11 cardinals staunchly urge the synod to make no changes in the church’s pastoral practices regarding divorced and remarried Catholics. In another, to be released Oct. 30 by the same publisher, 10 African bishops and cardinals make similar arguments.

The tone of the first book, titled Eleven Cardinals Speak on Marriage and the Family: Essays from a Pastoral Viewpoint, is evinced in words from a chapter written by Dutch Cardinal Willem Jacobus Eijk of Utrecht, who will be attending the synod.

Eijk writes that civil remarriage by a couple that has not received appropriate annulments of any first marriages is simply “a form of structured and institutionalized adultery.”

A third book, already released, comes from Cardinal Robert Sarah, prefect of the Vatican’s Congregation for Divine Worship and the Discipline of the Sacraments. A native of Guinea, in West Africa, who will attend the synod by virtue of his office, Sarah speaks in rather fiery terms that he opposes any changes in church practice.

“I therefore solemnly state that the Church in Africa is staunchly opposed to any rebellion against the teaching of Jesus and of the Magisterium,” he states at one point in his book, God or Nothing: A Conversation on Faith With Nicolas Diat.

The warning signs for the U.S. trip are less drastic. But many wonder just how this pope, a native Argentine who has never visited his North American neighbor, will engage a range of issues in ways that may challenge and stretch the positions of many groups.

Immigration, climate change, negative aspects of capitalism -- these are contentious matters in U.S. politics that are regular subjects of this pope’s concerns, as is respect for human dignity and human life.

The U.S. ambassador to the Holy See told Catholic News Service in August that he doesn’t think Francis will scold anyone, but the pope also won’t be afraid to say what he thinks needs to be said.

Ahead of his U.S. visit, Francis took the extraordinary step of inviting ABC’s “World News Tonight” to the Vatican to host a virtual town hall meeting with Catholics in three U.S. cities.

The event saw the pope interact with small groups in Chicago, Los Angeles and McAllen, Texas. Francis spoke only haltingly in English, and said in Spanish that he wanted to use the trip to get to know people in the U.S. better, “to draw close to you, in your path, your history.”

As with any political or spiritual leader, Francis is always at risk of one misjudgment that forever colors his legacy. Think of Pope Benedict XVI at Regensburg, Germany, citing a medieval scholar’s critique of Islam; or President George W. Bush in New Orleans after Hurricane Katrina.

Or, with the coming months’ confluence of debates on church practice and tightrope papal diplomacy, think of Pope Paul VI.

While Paul accomplished so much in 15 years as pope -- shepherding the Second Vatican Council to conclusion, being the first pope to visit the U.S. and the African continent, the first to address the U.N., and dramatically renouncing the papal tiara -- he is remembered, by most Americans at least, for one thing: Humanae Vitae.

However Francis proceeds in the next two months, it may prove just as decisive as that decision to reaffirm the church’s prohibition on artificial birth control.

Which makes it worth repeating the request Francis made during that virtual town hall meeting: “I’m praying for all of you, the people of the United States, and I ask you to pray for me.”

A version of this story appeared in the Sept 11-Sept 24, 2015 print issue under the headline: Two defining months.