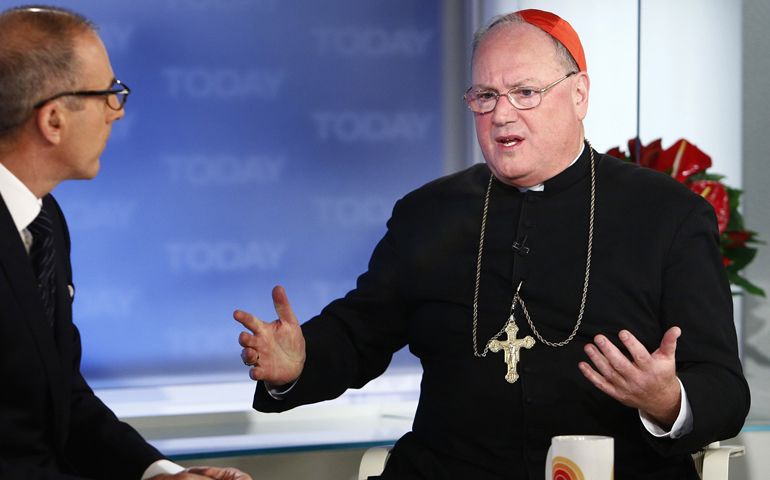 Washington — U.S. Catholic church leaders who awoke to the news of Pope Benedict XVI's announcement that he will retire at the end of February said they were surprised by the news but admired the pontiff's courage and humility for making the decision.

Cardinal Timothy Dolan of New York, president of the U.S. Conference of Catholic Bishops, said in a statement that the pope's announcement is "is but another sign of his great care for the church."

"The Holy Father brought the tender heart of a pastor, the incisive mind of a scholar and the confidence of a soul united with his God in all he did," the cardinal said, adding: "We are sad that he will be resigning but grateful for his eight years of selfless leadership as successor of St. Peter.

"The occasion of his resignation stands as an important moment in our lives as citizens of the world. Our experience impels us to thank God for the gift of Pope Benedict," he continued. "Our hope impels us to pray that the college of cardinals under the inspiration of the Holy Spirit choose a worthy successor to meet the challenges present in today's world."

Dolan was interviewed on the NBC's "Today" show early Monday, where he said he was as "startled as the rest of you" about the news. On SiriusXM's Catholic Channel, he said he admires "his humility more than ever."

The cardinal said he was "very much surprised" by the announcement, noting that he had seen the pope less than a month ago and there was no indication of a possible resignation.

He said he was "just stunned" when he heard the news in the morning and when he "got a call very early from Rome confirming this."

What does not surprise the cardinal, though, is that the pope was able to make such a decision.

"I don't think we should be surprised," he said, that when the pope realized he didn't "have the strength to continue" his role he had "the humility and courage" to act on it.

Archbishop Gregory Aymond of New Orleans also expressed his "great deal of admiration" for the pope, said he appreciated the pontiff's "recognition of the health issues he is facing" and admired "his humility in asking the cardinals to come together in prayer to select his successor."

In Chicago, Cardinal Francis George echoed his fellow U.S. prelates in saying the pontiff always has put "the will of God for the good of the church before every other consideration" and "that same resoluteness of purpose" is evident in his decision to resign.

Pope Benedict "has taught with clarity and charity what God has revealed to the world in Christ; he has handed on the apostolic faith; he has loved all of God's people with all his heart," the cardinal said in a statement. "He has now shown great courage in deciding, after prayer and soul-searching, to resign his office."

Archbishop Allen Vigneron of Detroit said he, "like most of my fellow Catholics, woke up to the very surprising news" that the pope was resigning.

The surprise, he noted, was followed by sadness -- "a sense of grief at losing his fatherly care for all us, bishops, clergy and faithful. We have come to love him very much and will miss him."

The archbishop likened the news to what many people experience in their families when they witness a parent "grow old and decline in ability."

"That is the sense we bring to this announcement. Our spiritual father has determined, by the best light given to him in prayer, that for the good of us all he must lay down his office," he added.

Archbishop Joseph Kurtz of Louisville, Ky., said he, too, was surprised "along with the rest of the world" about the resignation and was "touched by his humble admission of the strength necessary to carry on this ministry of Christ."

"This is a decision that reflects Pope Benedict's stewardship of his office and is a sign of his deep humility," he said.

Bishop Robert Lynch of St. Petersburg, Fla., said with Pope Benedict's election, the church received a leader "with an incredible intellect, a pastor's heart and a very patient listener."

Atlanta Archbishop Wilton Gregory called him "a man of extraordinary wisdom and deep faith" whose "love for the church and his own awareness of his age and loss of physical stamina led him to make this decision for the good of the church that he loves with all of his heart."

"From his work as a young theologian at Vatican II to his ministry as universal pastor," Pope Benedict "has served God and the global Christian community with intelligence, eloquence and extraordinary self-sacrifice," said Philadelphia Archbishop Charles Chaput.

"Catholics worldwide owe him a tremendous debt of gratitude. He will remain in our hearts and always be in our prayers."

Boston Cardinal Sean O'Malley recalled being with the pope when he met with survivors of clergy sexual abuse during his visit to the United States in April 2008.

"At that meeting, the Holy Father's pastoral care for the survivors was clearly evident, as was his commitment and determination to heal the wounds of all persons impacted by the abuse crisis and to insure that the Church continues to do all that is possible to provide for the protection of children," he said.

"I was overwhelmed with how he radiated the love of God," she said in a statement. She called him an inspiration to CRS "especially in how he has repeatedly stressed that our faith is inextricably linked to charity and social justice, which he expressed so eloquently in his encyclicals and most recently in his letter marking the season of Lent."

Bishop Paul Loverde of Arlington, Va., joined many others in urging Catholics and all people of good will to pray for and support the pope "as he moves forward into a new chapter in his journey of faith" and to ask the Holy Spirit to guide the cardinals during the next conclave to elect his successor.

The Leadership Conference of Women Religious in Silver Spring, Md., promised the pope the prayers of its members "as he prepares to leave the papacy." A statement from the conference thanked Pope Benedict for his "tireless service" to the church and for "the contributions he has made as a theologian, as the head of the Congregation for the Doctrine of the Faith and as pope. We respect his integrity in making what must have been a difficult decision to resign."

In the remaining days of his papacy, "our thoughts and prayers are with Pope Benedict ... who has worked so hard in leading the church, and has always been such a good friend to the Knights of Columbus," Supreme Knight Carl Anderson said. He, too, urged prayers for the cardinals who will take part in the conclave.

Speaking on behalf of the Catholic Press Association of the United States and Canada, president Greg Erlandson praised the pope for being a strong supporter of the Catholic media.

"His past eight statements marking the World Day of Communications have been profound meditations on the role of media in the life of the church and the world, said Erlandson, publisher of Our Sunday Visitor in Huntington, Ind.

"While he warned often of the dangers posed by some instruments of mass communication, he was also the first pope to tweet and a strong supporter of the role of social media, recognizing that the church must be open to new ways of reaching Catholics and all men and women of good will," he added. "For his entire pontificate, he has been a communicator to the church and the world, a living example of evangelization and a model of theological integrity and humility."

"The witness of his life and work has borne incredible fruit and will continue to do so in his retirement. His impact on the church will be felt for generations to come," said Denver Archbishop Samuel Aquila.

Cardinal Roger Mahony, retired archbishop of Los Angeles, said one of the pope's great legacies will be "a continuing emphasis on the need for all Catholics to exercise their role as evangelizers in the world."

Msgr. Jeffrey Steenson, of the Catholic church's U.S. ordinariate for former Anglicans, said Pope Benedict would be long remembered for "the largest reconciliation of Anglican groups with the Catholic Church in 500 years."

He said members of the ordinariate would be "forever grateful" to the pope for his "pastoral concern and vision for Catholic unity. In a very personal and significant manner, he has changed our lives as he has welcomed us and our Anglican patrimony into the Catholic faith this past year."

Others noted the significance of the pope's decision coming during the church's Year of Faith.

During a morning news conference, Wuerl stressed that the pope has "called all of us to carry out the spiritual mission of the church" particularly in the Year of Faith.

He described the pope's legacy as his "engagement of faith with the modern world."

Pope Benedict emphasized that "each one of us is capable of a personal relationship with God. That is his message," Wuerl said.

Oblate Fr. Andrew Small, national director of the Pontifical Mission Societies, said the pope has "poured out his life in service of God, the church and the poor."

"He has not yet run his race to the very end. We pray for him as he enters this next stage of his life," the priest said. "And as we do, we commit ourselves to the ongoing Year of Faith, asking that it may bring renewed energy to the mission of the church."

[Contributing to this report was Mark Zimmermann, editor of the Catholic Standard, newspaper of the Washington archdiocese.]