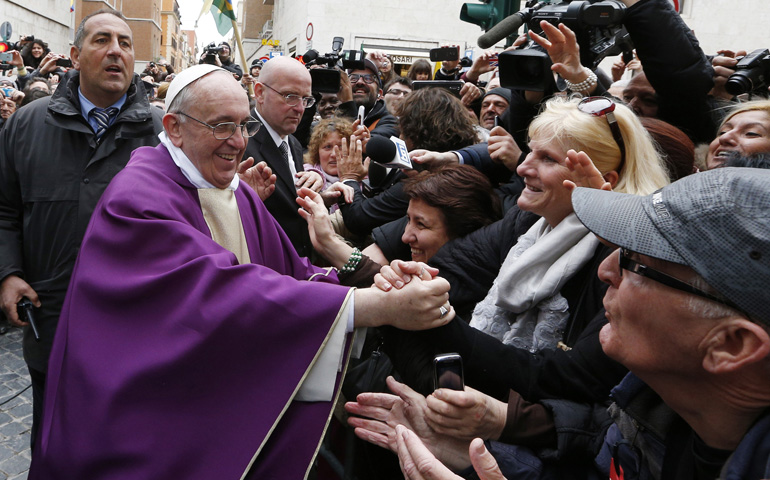 Domenico Giani, head of the Vatican police, in glasses behind Pope Francis, looks on as the newly elected pontiff greets people after celebrating Mass March 17 at St. Anne's Parish within the Vatican. (CNS/Paul Haring)

Pope Francis' style of breaking away from his security detail and diving toward the crowds means his protectors have had to do a quick rewrite of strategy, sometimes on the spot.

Concern and urgency were visibly etched on the face of the head of the Vatican police, Domenico Giani, after the pope celebrated Mass March 17 in the Vatican's Church of St. Anne.

Giani swiftly shouted out fresh commands for undercover guards and police to regroup as Pope Francis made a beeline toward a large cheering crowd pressing against a barricade outside the entrance into Vatican City. This came after the pope personally greeted, often hugging, each of the approximately 200 members of the congregation right after Mass.

The pope has preferred to walk short distances within Vatican City instead of taking a waiting sedan and has also eschewed a multi-car security escort for longer trips, preferring just one vehicle to get him to his destination. He had no qualms about stopping the open-air popemobile mid-ride Wednesday to climb out, kiss and bless a disabled adult in the throng.

"We are worried if there is more contact with people, because that means there's a greater possibility something can happen," he said Thursday.

But "we have to fully adapt ourselves" to what the pope wants, he said, and security will in no way try to prevent or dissuade him from greeting people.

It is because of their "ability and intelligence" that the papal guardians "know how to adapt and be flexible according to the pope's manifest wishes and intentions," he said March 18.

The 110 Swiss Guards' main duties are protecting the pope and his residence while the Vatican's own police force, the gendarme corps, is responsible for crowd control, traffic within the Vatican and other duties within the walls of Vatican City.

Together, the hundreds of people who guard the pope and the Vatican have tried to strike a delicate balance between providing tight professional security and a reasonable amount of access to the public.

Pope Pius XII began the practice of having "audiences outside" among the general public, Breitenmoser said.

Since then, the men guarding the pope, both in uniform and undercover, have had to develop "a system that's worked for years" of being able to provide discreet yet diligent protection, he said.

"It's wonderful to be able to experience up close" the pope meeting and interacting with the people even though "it makes us a little nervous, which is normal," he said.