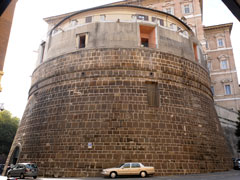 The Institute for the Works of Religion, popularly known as the Vatican Bank, is located in the Bastion of Nicholas V in the Vatican. (CNS/Catholic Press Photo)

Given the Vatican's traditional obsession with secrecy and autonomy, the report of the first independent, secular evaluation of the Vatican on financial transparency made news less for how the Vatican scored than the fact that it took the test in the first place.

Results of the highly anticipated evaluation were released July 18 by Moneyval, the Council of Europe's anti-money-laundering agency.

It came against the backdrop of the ongoing Vatican leaks scandal, which has featured revelations of private letters to the pope two years ago by a senior official charging financial corruption and cronyism, as well as memoranda documenting internal debates over the powers of a new financial watchdog unit touted as the leading edge of reform under Pope Benedict XVI. Still other leaks have focused on the Vatican Bank, including rumors of secret encrypted accounts allegedly used by Italian VIPs to evade tax obligations and by the Italian mob to launder money.

Collectively, the leaks have created impressions in some quarters that the "bad old days" of Vatican financial scandals, which crested in the early 1980s with the bizarre hanging death of a Vatican-linked financier in London and a $240 million payout to settle claims from the collapse of an Italian bank, are back.

Especially in that climate, the Moneyval evaluation offered the Vatican a welcome dose of good news. In a nutshell, evaluators concluded that the Vatican "has come a long way in a very short period of time" toward compliance with accepted global standards of transparency, and that "there is no empirical evidence of corruption taking place within the Vatican City State."

That said, the verdict was a mixed bag, offering criticism as well as praise.

For instance, evaluators strongly urged independent supervision for the Institute of the Works of Religion, popularly known as the "Vatican Bank." The absence of such oversight, the report warned, "poses large risks to the stability of the small financial sector of the Holy See and Vatican City State."

The Vatican Bank has slightly more than 33,000 accounts, mostly in Europe, though also including dioceses and religious orders around the world, and controls an estimated $7 billion in assets.

According to the Moneyval report, the unit lacks adequate powers to carry out its duties, has not yet carried out any inspections or sample testing of files, and has received a surprisingly low number of reports concerning suspect transactions even allowing for the small size of the Vatican's financial sector.

Overall, Moneyval evaluates states based on 49 benchmarks of transparency. Four were judged non-applicable to the Vatican, while it got passing grades on 22 and failing marks on 23. The Vatican was judged "compliant" or "largely compliant," the highest marks available, on nine of the 16 "key and core" standards.

Those results place the Vatican squarely in the middle of the global pack, with scores comparable to recent evaluations of Germany, Italy and the Czech Republic. As a result, the Vatican will not be assigned to Moneyval's "Compliance Enhancing Procedures" designed for problem states -- as close as Moneyval comes to saying that a country "failed." Instead, the Vatican will be subject to the normal follow-up process for states seen as moving in the right direction.

The Vatican official who headed up the team working on the Moneyval evaluation, Italian Msgr. Ettore Balestrero, called the July 18 report "not an end, but a milestone in our continuing efforts," and said the Vatican takes "both the praise and the criticism with seriousness."

In particular, Balestrero pledged that the Vatican will issue new regulations shortly for the Financial Information Authority, giving teeth to its powers of oversight.

Standing back from the details, the fact the Vatican chose to subject itself to such scrutiny is, by itself, something of a watershed.

Moneyval is the European arm of the Financial Action Task Force, an intergovernmental agency created by the G-8 in 1989 to lead the global fight against money laundering. The task force's mandate was expanded after 9/11 to include the financing of terrorism. Most Western nations have undergone three rounds of review over the last two decades by the task force and its regional satellites.

Until two years ago, the Vatican had not been part of that process. In February 2011, however, the Vatican requested a Moneyval evaluation, which involves a team of outside experts scouring legal and financial records, conducting an on-site visit, and reviewing the performance of financial institutions. The team in this case included the president of the main European body of financial intelligence units, a professor of international law, and two senior financial professionals, as well as the president and other senior officials of Moneyval.

American lawyer Jeffrey Lena, an advisor to the Vatican on the Moneyval process, told NCR that evaluators were able to examine records of judicial and diplomatic cooperation, anti-money-laundering certifications, accountancy management letters, foundation registry records, and other confidential legal documents. Observers say it's the first time the Vatican has granted such access to outside regulators.

The team apparently did not experience difficulties with closed doors. According to the report, "The Holy See and Vatican City State authorities have cooperated closely with the evaluators."

Given the Vatican's traditional reluctance to open up like this, why do it?

Officially, the Vatican has styled it as a case of setting a good example. In a July 18 press briefing, Balestrero described the process as "first and foremost, a moral rather than a technical commitment."

Balestrero added that the Vatican's newfound commitment to transparency should "guide and orient Catholic religious organizations throughout the world."

Observers add, however, that there's also an imminently practical motive. If a state is perceived to be at risk for money laundering, its financial institutions -- in this case, the Vatican Bank in particular -- usually pay a price. Depositors may take their business elsewhere, worried about possible seizures of assets, while banks in other countries may impose higher transaction costs to cover more aggressive "due diligence" measures. In general, a state's ability to play the global financial game is impeded.

In other words, it's not just the Vatican's moral capital at stake, but its dollars and euros too.

To be sure, many analysts say the Vatican's conversion to transparency remains a work in progress.

For instance, Pope John Paul II launched the tradition of issuing an annual financial statement back in 1981, partly in response to the earlier Vatican Bank scandals. Although external auditors review that statement, it falls short of a true certified audit, and still lacks details many observers would like to have. This year's version, released July 5, didn't even contain overall 2011 revenue or expenses for either the Roman Curia or the Vatican City State, simply indicating the amount each entity was in the red or the black.

Has the 'EWTN schism' begun?

How the church turned toward religious freedom

Pope Francis' appointments will create church of the future