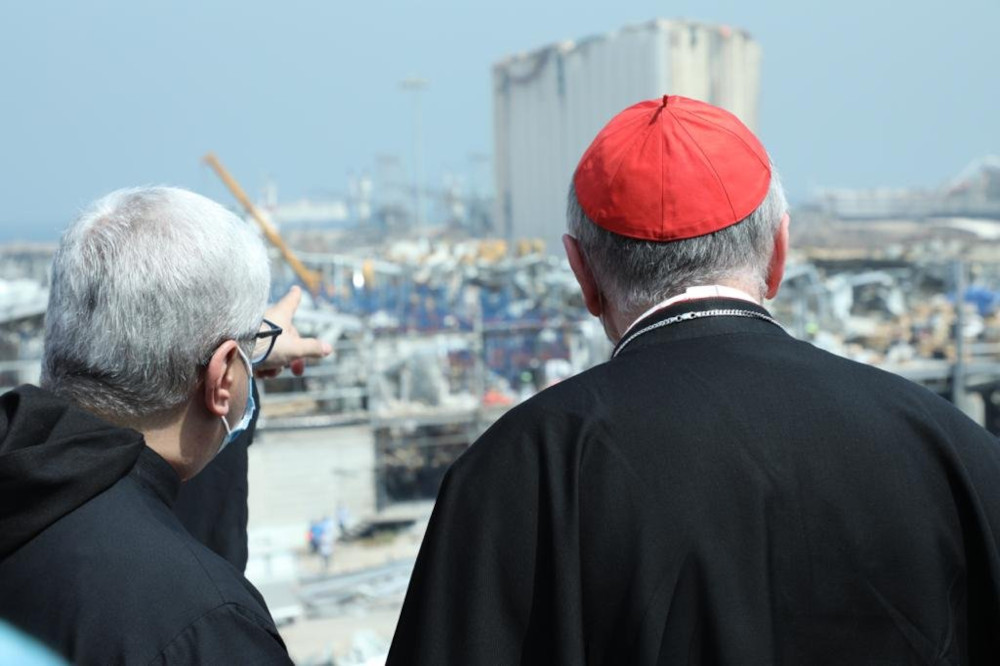 Bringing a message of hope to Lebanon, a month after a double blast struck Beirut, Pope Francis' closest collaborator assured the Lebanese: "You are not alone. The whole world supports you."

Cardinal Pietro Parolin's Sept. 3-4 visit to the suffering country on behalf of Francis coincides with the papal call for believers around the world to observe "a universal day of prayer and fasting for Lebanon" Sept. 4.

Lebanon's population, already exhausted by a collapsing economy that has plunged even the middle class into poverty, has been traumatized by the disaster, blamed on 2,750 metric tons of ammonium nitrate stored for years in a port warehouse. At least 190 people died, more than 6,5000 were injured and more than 300,000 people remain homeless.

"I come to your historic city to express the nearness of the Catholic Church throughout the world. His Holiness Pope Francis has asked me to come and meet you after he launched his appeal for prayer, fasting and solidarity with Beirut and with Lebanon. The response to the pope's appeal has been immediate, arriving from so many different countries, from all the continents," said Parolin, who serves as the Vatican's secretary of state. He spoke at an interfaith welcoming ceremony Sept. 3 at the Maronite Catholic Cathedral of St. George.

Religious leaders representing all the church denominations in Beirut gathered with clerics representing the Sunni, Shiite Muslim and Druze communities. Representatives of the interfaith solidarity foundation Adyan and humanitarian organizations, including the Lebanese Red Cross and Caritas Lebanon, also attended.

Parolin entered the cathedral under scaffolding erected to repair damage sustained in the blast. He continued on to a large meeting room, where the interior windows were still shattered.

"You are not alone," the cardinal said, a message he repeated throughout his two-day visit.

"We pray that God may render us strong to care for every person who was affected and to accomplish the task of rebuilding Beirut," the cardinal said.

He pointed to "the unique value of Lebanon, part of the Holy Land that was visited by Our Lord Jesus Christ and his apostles, and by his mother, beloved by all Lebanese, the Holy Virgin Mary."

The cardinal stressed that all religious leaders "have a primary mission to give hope to an afflicted population. Let us help each other to accomplish our mission."

"The beautiful examples of solidarity that are being lived all over Beirut strengthen our hope and inspire our future actions," he said. 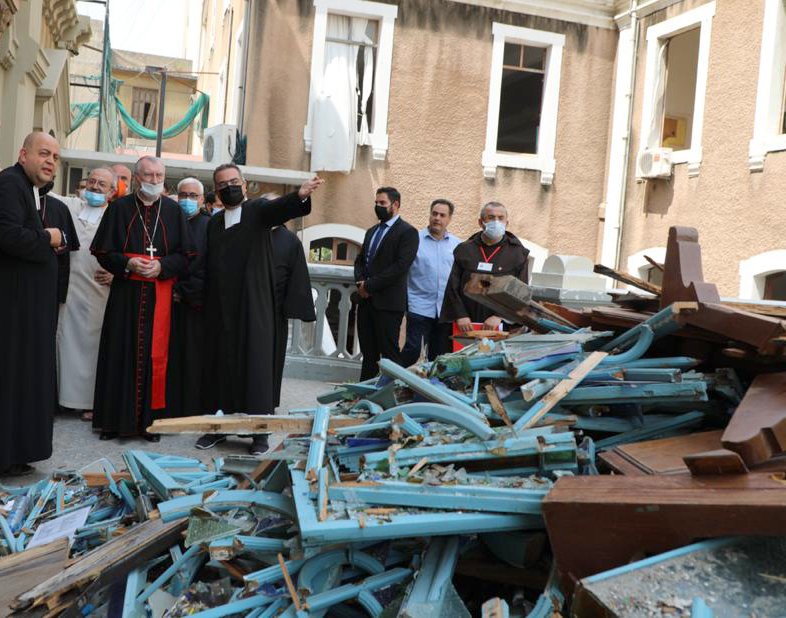 Addressing the religious leaders and organizations present, the cardinal said: "I know that all of you are bearing the biggest part of the responsibility and deploying great efforts not to abandon anyone in these tragic circumstances. May you continue to offer an example of sincere solidarity, faithful to the Lebanese tradition of resilience, creativity and mutual support.

"I wish to repeat quite clearly the appeal of Pope Francis to the international community: Do not leave Lebanon alone! Lebanon needs the world, but the world also needs the unique ongoing experiment of pluralism, living together in solidarity and freedom that is Lebanon," Parolin said.

"Together, we will rebuild Beirut! God bless you!"

Maronite Archbishop Paul Abdel Sater of Beirut, who welcomed Parolin to the cathedral, recognized the religious gathered from Beirut, noting that amid destruction in their churches, "they have been on the streets with their people, treating and comforting them, taking up shovels, hammers and saws to fix what can be repaired ... carrying the cross with the wounded and accompanying the dead to their final resting place."

"The Middle East is constantly emptying from the Christian presence, especially from its youth," the archbishop told Parolin, appealing to the Vatican "to do your best to thwart this ugly and harmful scheme."

The cardinal then visited the massive Mohammad el-Amine mosque, its interior also under scaffolding due to damages.

Celebrating Mass that evening at Our Lady of Harissa shrine on a summit overlooking the Mediterranean north of Beirut, Parolin told the faithful, "It gives me great joy to express to you the Holy Father's closeness to you and his solidarity with you.

"You are not alone in your trials, the whole world stands in solidarity with you today."

Due to coronavirus prevention measures, the Mass was celebrated in the gardens beneath the massive statue of Mary with outstretched hands, rather than in the adjoining basilica.

"How can we not stand in admiration in front of the determination of the Lebanese to rebuild their country? When death was taking over Beirut, scenes of solidarity and brotherhood erupted in the streets of the capital ... as a sign of a glorious resurrection," Parolin said, pointing to young people who mobilized for cleanup and assistance in affected neighborhoods.

He noted that Francis has "called on the international community to help Lebanon and work to solve its problems and to search for the good of this great people in the country that St. John Paul II described as a message to the West and the East."

He asked Our Lady of Lebanon, who "watches over all of Lebanon, and looks at Beirut while tears fill her eyes ... to intercede before the Lord Jesus so that the land of cedars may bloom again and spread the scent of living together all over the Middle East."

Following a meeting Sept. 4 with Lebanese President Michel Aoun, a Maronite Catholic, Parolin said he told the president that "the Holy See gives great importance to Lebanon," and that "Lebanon is not alone, and there is international support for the reconstruction of Beirut after the explosion."

The cardinal stressed that "dialogue is the only way to cooperate in order to ensure a better future for [the country's] young people."