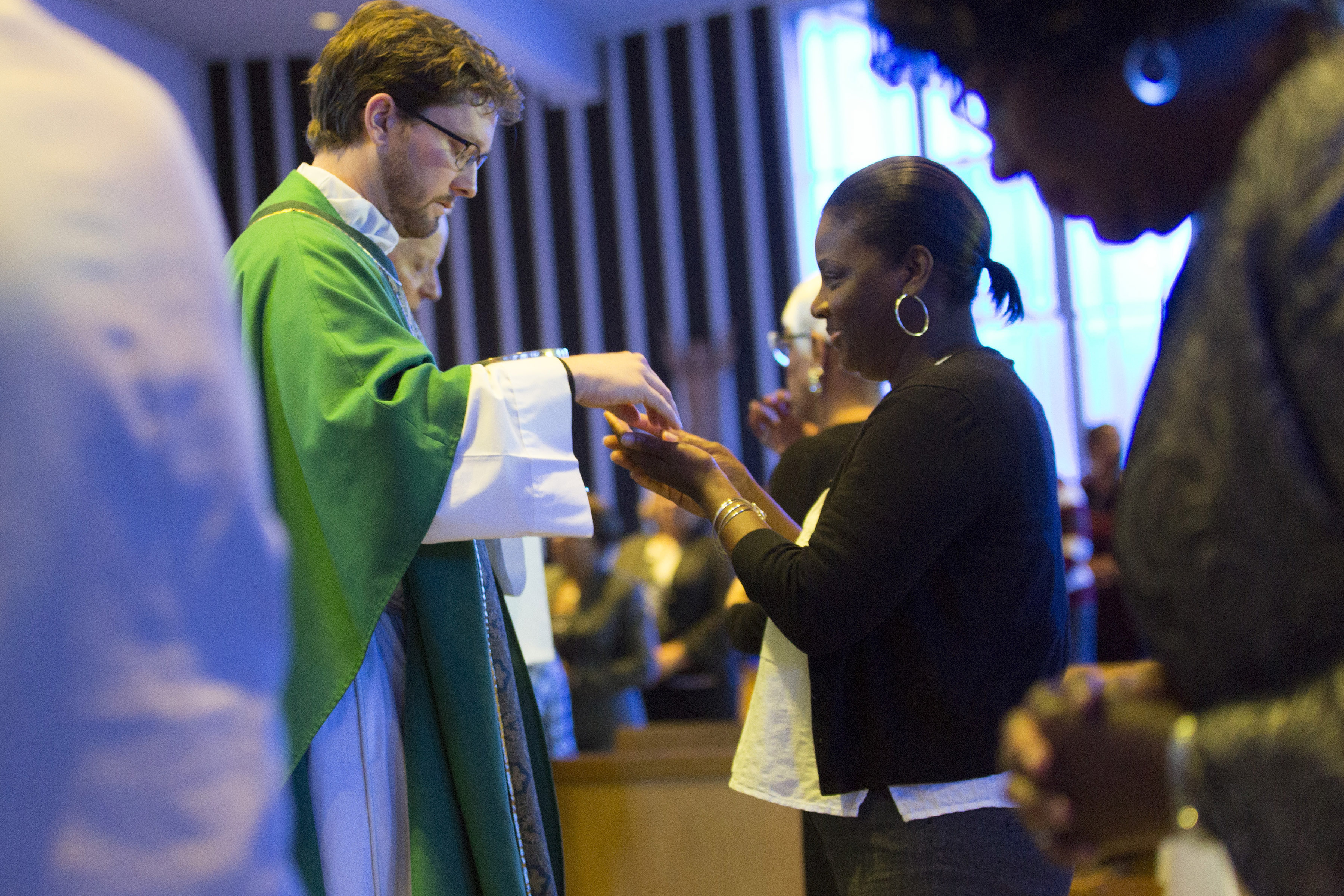 Fr. Kevin Regan distributes Communion during a 2017 parish anniversary Mass at Holy Family Parish in Hillcrest Heights, Md. Regan, the new pastor of St. John Neumann Parish in Gaithersburg, noted that he entered the seminary in 2003, the year after the Boston abuse scandal shook the nation's Catholics. (CNS/Catholic Standard/Jaclyn Lippelmann)

Parish priests in the Archdiocese of Washington -- on the front lines dealing with the fallout of the church sexual abuse crisis this summer -- have stressed the need to listen to and pray with their parishioners.

The archdiocese was hit with the resignation of their retired archbishop, Theodore McCarrick, in the wake of sexual abuse allegations and then it faced a firestorm of criticism against Washington Cardinal Donald Wuerl after the release of the Pennsylvania grand jury report detailing past decades of abuse in six dioceses.

Although some have credited Wuerl's tenure in Pittsburgh with a decrease in abuse cases while he served as bishop there from 1988 until 2006, the grand jury's report points to times when he is said to have allowed an accused priest to continue working and prevented an alleged victim from speaking out about being abused after a financial settlement.

Msgr. Michael Mellone, whom Wuerl installed as pastor of Annunciation Parish in Washington Sept. 2, said his first thought when the abuse scandals unfolded was: "Didn't we deal with this already? And now I know we haven't."

The veteran priest, said his main message to parishioners "has been to focus on the victims of the abuse. Pray for them, sacrifice for them, and lift them up."

Mellone and Fr. Andrew Wakefield, Annunciation Parish's parochial vicar, have made time to listen and speak with parishioners about the scandals.

The church's faithful priests have also suffered, Mellone pointed out, saying they are the "ones who are on the front lines, and they are the face of the institutional church."

St. Andrew Apostle Parish in Silver Spring, Maryland, held a listening session Aug. 26 seeking healing as a parish. The gathering drew about 150 people and began and ended with Eucharistic Adoration.

He said he shares his parishioners' sadness.

Like many parish priests, Msgr. Michael Wilson, pastor of Our Lady Star of the Sea Parish in Solomons, has also spoken frankly with his parishioners about this.

"I start off by sharing my own feelings," he said. "I'm really disgusted by the actions of priests that did this terrible stuff, and disappointed and angry with bishops who didn't address it … There has to be justice for the people who did this."

He has encouraged parishioners to come to adoration on Tuesdays and pray for healing in the church, and to ask the Blessed Mother, their patroness, for her intercession, and to show they are united in their faith, by coming together for activities like their upcoming parish picnic.

He has reminded his parishioners that their faith is ultimately in Jesus Christ, and they are called to be his witnesses in how they live. "Now's not the time to leave the church. We all have to stand up and bear witness to the truth," he added.

Fr. William Byrne, the pastor of Our Lady of Mercy Parish in Potomac, said he has been telling his parishioners "that I walk with them in sadness, in pain and in anger."

He said he hoped that his parish's listening sessions would provide "an opportunity to walk with them in their grief," as they prayed together to their patroness, Our Lady of Mercy. He said she "held the crucified Christ in her arms" and in the same way, "we're going to ask her to hold us in her arms also."

The pastor said he knows his brother priests to be good holy men and men of prayer, who are grieving and sad but who also can see "the hand of the Lord bringing hope to this tragic time."

Fr. Kevin Regan, pastor of St. John Neumann Parish in Gaithersburg, entered the seminary in 2003, the year after headlines about the clergy abuse scandal shook the nation's Catholics.

He has offered listening sessions and times of prayer at the parish.

He points out that "many great saints accompanied people at times like these, inviting people to remain true to Christ and his truth." He said saints like St. Francis of Assisi, St. Catherine of Siena and St. Ignatius of Loyola helped restore the faith in challenging times.

His advice for how people can find hope, healing and keep the faith, is to "continue to speak to each other, share their thoughts with their pastors, pray for greater compassion, be aware of the stages of grief, and cling to the Lord. Cling to Christ."