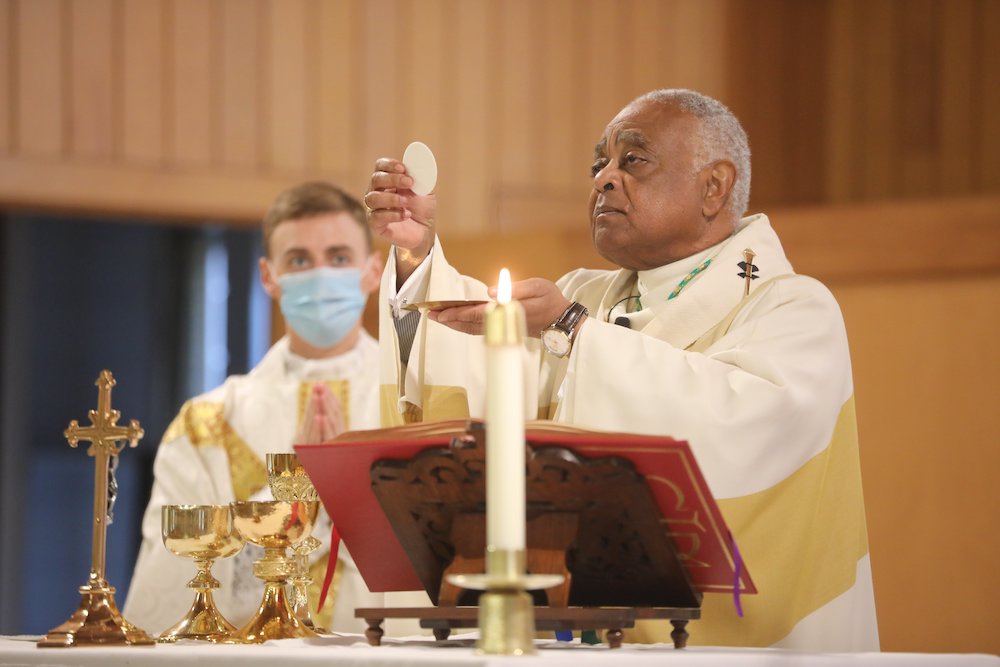 Washington, D.C., Archbishop Wilton Gregory expects being able to dialogue with U.S. President-elect Joe Biden, only the second Catholic to be elected to the nation's highest office, "in an honest and respectful way."

In an NCR interview ahead of the Vatican's Nov. 28 event at which Pope Francis will make Gregory one of 13 new cardinals of the Catholic Church, the archbishop said he imagines being able to work with Biden on issues of mutual interest but also to raise matters of concern from the church's perspective.

"I certainly hope to be able to be in dialogue with him," the cardinal-designate said of Biden.

"Working with him in those areas where we can collaborate because we are pursuing issues that are important both to the church as well as to his own administration," Gregory explained. "But I also have to be honest with him in highlighting the areas where there is serious disagreement."

"Being in conversation, being in dialogue, means more than just speaking about the happy things, [but] to talk about the challenging things as well," the cardinal-designate said, adding: "In a respectful way. A respectful way."

Gregory, who will be only the fourth American Francis has made a cardinal in his nearly eight-year papacy, was speaking in a video interview from Rome, where he has been observing a 10-day quarantine in accordance with Italy's coronavirus prevention measures ahead of the Nov. 28 event.

The cardinal-designate's comments about working with Biden come after the president of the U.S. bishops' conference, Los Angeles Archbishop Jose Gomez, announced on Nov. 17 the formation of a new working group to consider how American prelates should handle the president-elect's Catholicism, especially his stance on supporting legal abortion.

Gomez's announcement came at the end of the bishops' annual meeting, held virtually this year. Gregory said he had only been able to attend about an hour of the meeting, because of the scheduling of his flight to Rome, and "wasn't there" when the new working group was announced.

"I hope that whatever the outcome is, it advances the work of the church, it strengthens the relationship of the church in the United States with the administration and it provides a guidance for ways, again, we can work in collaboration," said the cardinal-designate.

But Gregory said the pope also expects frankness. "There's no sense in being a collaborator, a close collaborator, if you don't tell the man the truth — at least the truth as far as you can tell," said the prelate.

One thing Gregory said he expected to be able speak to Francis about are the dynamics of the U.S. Catholic Church.

"I hope I can help him understand better, at least as far as I can ascertain, what is the health and the vitality and the hopes and the dreams of the church in the United States, from my vantage point in Washington, D.C."

Gregory, who is the first African American Archbishop of Washington and the first Black U.S. cardinal, also said he hopes "to be able to speak with clarity and with integrity about the hopes and the dreams and the aspirations of the African American community."

The cardinal-designate was serving as Archbishop of Atlanta before being appointed to Washington by Francis in April 2019. He said he has found the church in the nation's capital an "enthusiastic" community.

"People are looking for compassion, understanding, honesty and integrity in their ministers," said Gregory. "I've discovered that in the Archdiocese of Washington. It is a very healthy church."

Read this next: Some bishops seek common ground, not confrontation, with Biden
A version of this story appeared in the Dec 11-24, 2020 print issue under the headline: Gregory expects 'honest' dialogue with President-elect Biden.