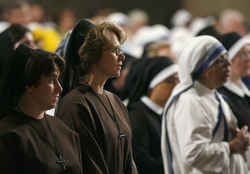 Sisters from various orders are pictured during the opening of a eucharist congress at the Basilica of the National Shrine of the Immaculate Conception in Washington Sept. 11, 2009. (CNS photo/Nancy Wiechec)

I must admit that I looked forward to the Vatican’s apostolic visitation of U.S. women religious with all the enthusiasm of a Thanksgiving traveler approaching a TSA screening. My initial how-dare-they fury had calmed and over the months I decided that I really wanted to have a say in the process.

To this end, I read everything -- Immaculate Heart of Mary Sr. Sandra Schneiders’ articles in NCR, our own constitutions and history, funny articles, and moving testimonials by our former students and clients.

Most of my initial anger was directed at this patriarchal church of ours. I questioned the requirement that the “visitators” had to make professions of faith and take oaths of fidelity before interviewing us and that the report to the Vatican was not to be copied to us.

It sounded to me as if the judge was requiring prospective jurors to be of one mind about the verdict before being seated for the trial -- as if we were going to be put through a bit of “enhanced interrogation” and forced back into a Procrustean one-size-fits-all church.

Well, was I surprised! I arrived at the motherhouse actually looking forward to the visit. We had driven from Denver to Milwaukee for Call to Action, an inspiring dip into the beloved church of our Vatican II hopes, and a good preparation for what was to come.

As we drove along toward Nerinx, Ky., I reflected on the questions we were to answer. They were good questions -- fair, respectful, not intrusive: What is your vocation story? Your ministry background? What are the strengths of the community? Some concerns you have about your community? Your personal vision of religious life? (Trinity-like, the questions asked for three concerns, three issues, three ways the pastors of the church can assist your community, etc.)

We had missed the opening prayer, but I knew it had been something special. Community members all over the country were able to be part of it through Web conferencing -- except those negotiating the twists and turns of Kentucky roads -- and the spirit at the motherhouse when we arrived the next day was high and proud and even joyful.

The four women who visited us were, well, sisters. I don’t know what I had expected, but I liked them. Warm, friendly, receptive -- though two wore habits, we had so much more in common with them than surface differences would suggest.

I had a 40-minute visit in a comfortable alcove off the Thomas Merton Room to talk about myself and my community. Who could ask for more? I had prepared at length, typing out my thoughts because, as I explained to the visitor, I am easily sidetracked by interesting ideas. What follows are some of my responses.

To the question “How can pastors of the church assist your community?” I explained: You can help by not treating us like sheep. Respect our intelligence, our faith and our gifts for ministry. Come to grips with the reality that you cannot command our consciences or our faith and that you need to strive for an inclusive church.

Gathering momentum, I continued: Rather than calling yourselves “shepherds,” how about “radical disciples”? Or wait! Here’s an idea. We have read that in olden days, kings and even gods would conceal their identity and walk among the people to find out what was really going on in their lives.

Some employers today even do the same. Gautama’s father shielded his son from seeing any of the harsh realities of life, but when the young man finally got a glimpse of old age and pain, he entered on a journey and became the Buddha. Try it, brothers! I bet you will be surprised.

I loved to be able to talk about the strengths of the group: Our community is not afraid to allow us to “pursue the question,” as they say in scientific inquiry. Pursuing the question means following it where it leads you -- often to further questions. It means not accepting ready-made answers, not being content with obvious or even “hallowed” answers, but continuing faithfully to follow truth wherever the quest takes us.

Our constitutions make this clear:

We respect the courage of our members to act on their Christian convictions. Although we may not arrive at a common application of the Gospel to any particular issue, we affirm and honor one another’s personal integrity and decisions of conscience in the search for what is just.

“What do you see as the future of religious life?” Personally, I hope the community becomes less formally affiliated with the church that has become weighed down by a non-Jesus-like dogmatism and a fear of the future. The thou-shalt-nots have begun to outnumber both charity and reason. Millions of children in Africa and Haiti, for example, have died or been orphaned by AIDS, yet the church continues to condemn condoms (except, now, for male prostitutes).

Young students bully and terrorize fellow students who may be gay, causing not a few to end their own lives, while the church silently supports this behavior with its “teachings.” A bishop in Phoenix excommunicates a religious sister-ethicist for voting with her hospital board to allow the termination of a pregnancy in a critically ill mother of four. Can you, in your wildest imaginings see Jesus acting like this? I can’t.

Issues that threaten the community? Hmm. Maybe first, I would have to say, an intransigent hierarchy, sadly out of touch with the world. As theologian Diana Hayes said last year at Call to Action, “How can we expect the bishops to lead when they have been chosen precisely because they are good followers?”

Second, an Obama-like slowness in moving from where we are to where we want to be.

And third, I listen to the prophetic Call to Action meeting where love of the church envisioned by Pope John XXIII and Vatican II was palpable, and I would want to continue to find a home in such a Catholic church, not one preoccupied with legalism, clericalism and ancient cultural practices, or the avoidance of “scandal.” Speaking out on some issues can be a threat to religious communities. But what will be the cost of silence?

Oh, good! I have not lost my anger -- it was just momentarily displaced.