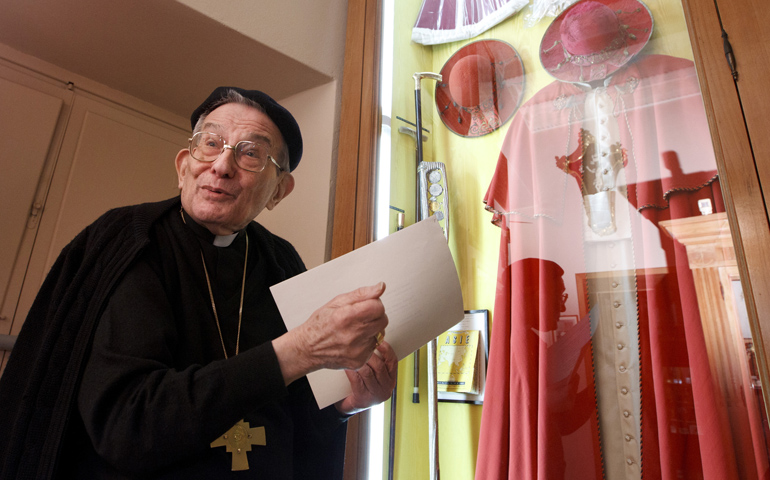 When the freshly named patriarch of Venice, Cardinal Angelo Roncalli, chose 37-year-old Fr. Loris Capovilla as his private secretary in 1953, a skeptical adviser told the cardinal that the priest looked too sickly to bear the strain of his new job.

"Then he'll die as my secretary," replied the future pope, now known as Blessed John XXIII.

Today, at age 98, now-Archbishop Capovilla has outlived his employer by half a century and remains an indefatigable custodian of his legacy, running a small museum dedicated to Blessed John's memory in the late pope's native town of Sotto il Monte Giovanni XXIII, about 25 miles northeast of Milan.

On Feb. 22, Pope Francis is scheduled to make the archbishop the world's oldest living cardinal.

Most observers have interpreted the honor as an indirect tribute to Blessed John, whom Pope Francis will canonize April 27.

But the cardinal-designate himself told Catholic News Service, in a telephone conversation Jan. 28, that his elevation is a "sign of attention to all those thousands of priests around the world who have spent their lives in silence, in poverty, in obedience, happy to serve God and our humble people, who need, as Pope Francis continually says, tenderness, friendship, respect and love."

Capovilla, who was born in Pontelongo, Italy, on Oct. 14, 1915, and ordained to the priesthood in 1940, has hardly spent his own life in silence. A journalist before starting to work for Blessed John, he remains an energetic and eloquent raconteur, drawing on his remarkable memory for vividly detailed and revealing stories of his years with one of the most consequential figures in modern Catholic history.

He has also recounted those stories in numerous writings, including a memoir published in English as The Heart and Mind of John XXIII.

The cardinal-designate was privy to some of the pope's first remarks, only a few days after his election in 1958, about what would become the Second Vatican Council.

Cardinals and bishops had presented the new pontiff with an array of challenges in areas that included the liturgy, diplomacy and the education and discipline of priests.

"My desk is piling up with problems, questions, requests, hopes," John told his secretary. "What's really necessary is a council."

When the secretary refused to comment, the pope interpreted his silence as disapproval.

"You think I am old," John told him. "You think I'll make a mess out of this enormous task, that I don't have time. ... But that's not how you think with faith. ... If one can only begin with the preparatory commission, that will be of great merit. If one dies, another will come. It is a great honor even to begin."

Whatever doubts he may have had at the outset, Capovilla came to appreciate the council's historic importance and to play a part in it behind the scenes.

By his own telling, it was the cardinal-designate who persuaded a reluctant and tired Blessed John to step to a window and address the crowd in St. Peter's Square on the night of Oct. 11, 1962, following Vatican II's opening day.

The former secretary recently quoted from that speech in a comment on his upcoming honor.

"If you think that Pope John, on the greatest day of his life, the opening of the council, said in front of the whole world, 'my person is nothing, it is a brother who speaks to you, become a father by the will of our Lord' -- if a pope said this at the height of his pontifical service, what do you think a poor little priest can say?" the cardinal-designate told CNS.

He also quoted the late Cardinal Gustavo Testa, who, upon his elevation to the College of Cardinals in 1959, told John: "I don't want a coat of arms. I want a shield with these three words: 'Only your grace.' Which is to say, Holy Father, you have thought of me, you have done it, and I have bowed my head."