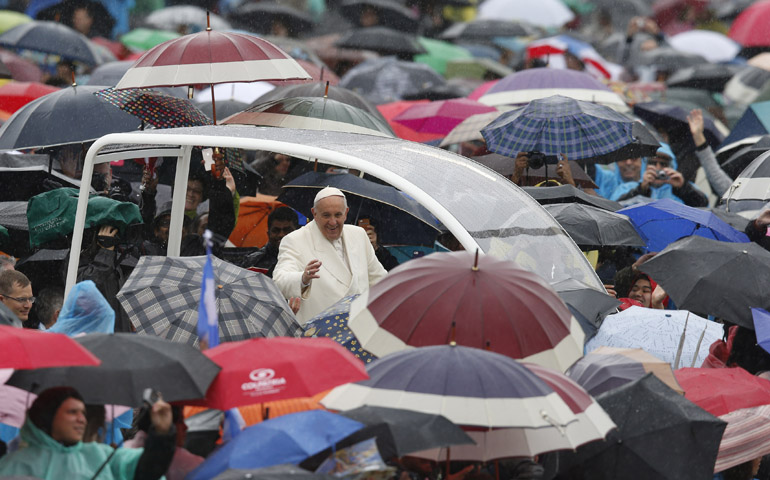 With months to go before October's Synod of Bishops on the family, bishops from around the world are already discussing some of the main topics, including LGBT relationships and divorced and remarried couples.

Meanwhile, Pope Francis asked for prayers, "not gossip," for the upcoming synod at his weekly general audience in St. Peter's Square March 25.

The pope called on everyone to pray each day for the synod, scheduled for Oct. 4-25, and for the church so that it could be even more "dedicated and united in the witness of the truth of God's love and mercy for the families of the world, [with] no one excluded either inside or outside the flock."

Francis asked that prayers and the synodal process itself be driven by "the compassion of the Good Shepherd for his flock, especially for people and families who, for different reasons, are 'troubled and abandoned, like sheep without a shepherd.' "

The Vatican released a second list of delegates March 25 elected to attend the synod on the family. Francis approved the bishops elected by members of 38 bishops' conferences and the Syro-Malabar church. In early February, the Vatican had released the first list of delegates, including those from the United States. Most lists are expected in the coming months.

German Cardinal Walter Kasper also urged Catholics to let their bishops know their hopes and concerns for the synod, and to pray that the Holy Spirit guide the bishops' deliberations.

"We should all pray for it because a battle is going on," he said March 19 in a speech presenting his new book, Pope Francis' Revolution of Tenderness and Love, published in English by Paulist Press.

Bishops attending the synod will be called to discern ways the church can communicate joy to all families, including those who have experienced the brokenness of a sacramental marriage, he said.

"Hopefully, the synod will be able to find a common answer, with a large majority, which will not be a rupture with tradition, but a doctrine that is a development of tradition," the cardinal said. He added that if the church believes it has a "living tradition," it means that there is room for it to develop.

For the synod to live up to its potential and to give the pope the information and inspiration he needs, Kasper said, the participating bishops must hear from Catholic faithful and be supported by their prayers.

"The pope and the synod must decide" what steps to take next, he said, "but decide after they listen."

Dioceses across the United States were to have sent comments on the lineamenta, or outline for the synod, to the U.S. bishops' conference by March 20. The Vatican has asked bishops' conferences to submit their reports by April 15.

For those who found their dioceses' official survey on family life too lengthy or confusing, Strong Catholic Families -- a group of four national organizations that minister to families and youth -- created a three-question survey using concise language. Though the results won't be shared with the Vatican's Secretariat of the Synod, church leaders and parish workers will be able to view and discuss the answers.

The Strong Catholic Families survey was directed at parents or church leaders specifically, asking them to rank statements in order of importance or agreement. Of the 12 statements, the top two messages both parents and church leaders said they want to hear from the church and church leaders were "You are always welcome at our church," followed by "How can the church help you/your family live out your faith in the world?"

At The Catholic University of America March 16, Archbishop Joseph Kurtz of Louisville, Ky., offered his insight into last fall's synod and outlined the core principles that will be part of upcoming synod. As president of the U.S. Conference of Catholic Bishops, Kurtz is part of the contingent representing the U.S. church at both gatherings. He said he focused on three points:

Kurtz said that one discussion about the final document revolved around the annulment process, and the consensus was that it needed to be streamlined.

The lineamenta also recognizes that the church must respond in a pastoral manner to people experiencing same-sex attraction, Kurtz said. "Every human being is made in God's image and likeness and sometimes people forget that. People can be very mean-spirited. So the church has to be strong in saying, 'You know what? Every person is created by God in his image,' " he said.

At the same time, he explained, "we cannot change what marriage is. It is a God-given gift that is at the very core of family. It will always be a man and a woman, the two who become one flesh, open to new life."

Outspoken U.S. Cardinal Raymond Burke has not been as charitable in his recent remarks on synod issues, telling an interviewer that gay couples and divorced and remarried Catholics who are trying to live good and faithful lives are like "the person who murders someone and yet is kind to other people."

"If you are living publicly in a state of mortal sin, there isn't any good act that you can perform that justifies that situation: The person remains in grave sin," Burke told LifeSiteNews March 24.

"To give the impression that somehow there's something good about living in a state of grave sin is simply contrary to what the church has always and everywhere taught," Burke said.

Asked if being "kind" and "generous" and "dedicated" is enough, Burke replied: "Of course it's not. It's like the person who murders someone and yet is kind to other people."

English Cardinal Vincent Nichols of Westminster urged priests to end debating the synod in the press, after more than 450 priests published a letter calling on the Catholic church to retain the prohibition on divorced and remarried Catholics receiving Communion.

"The pastoral experience and concern of all priests in these matters are of great importance and are welcomed by the Bishops," Nichols, president of the Bishops' Conference of England and Wales, said in a statement March 25. "This dialogue, between a priest and his bishop, is not best conducted through the press."

The letter, signed by 461 priests, explained that it was written to counter "confusion" over the moral teaching of the Catholic church as a result of some synod fathers pushing for a relaxation of the ban on divorced and remarried Catholics receiving Communion. The priests said their intention was "to restate our unwavering fidelity to the traditional doctrines regarding marriage and the true meaning of human sexuality."

Cardinal Gerhard Müller, prefect of the Vatican's Congregation for the Doctrine of the Faith, has advised bishops' conferences not to take "doctrinal and disciplinary decisions" on issues that rightly fall under the magisterium of the church.

Müller said that while bishops' conferences have authority on some matters, "they don't constitute a magisterium within the magisterium, independently of the pope and out of communion with other bishops."

His comments came in relation to claims at a recent news conference by Cardinal Reinhard Marx, president of the German Bishops' Conference, that his church stood ready to "preach the Gospel in its own original way," rather than being seen as "a branch of Rome" in relation to the possibility of allowing divorced and remarried Catholics to receive the sacraments.

In a March 26 interview with the French Catholic weekly Famille Chrétienne ("Christian Family"), Müller said that the idea of "delegating certain doctrinal or disciplinary decisions on marriage and family" to bishops' conferences was "absolutely anti-Catholic."

"Hearing it said that an episcopal conference isn't a 'branch of Rome' leads me to recall that dioceses aren't branches of a bishops' conference secretariat either," Müller said.

"This type of attitude risks reawakening a polarization between local churches and the universal church that was overcome by the First and Second Vatican Councils. The church isn't a gathering of national churches whose presidents vote in their head as a universal authority."

Support for a change to Catholic doctrine on marriage and family affairs is believed widespread in Germany. A December 2014 German Bishops' Conference report suggested most of the country's 66 bishops believed sacraments should be available to divorced and civilly remarried Catholics.

The German Bishops' Conference reported March 26 that it had so far received 1,000 responses to a pre-synod questionnaire circulated to the country's 27 dioceses and Catholic associations and institutions.

A version of this story appeared in the April 10-23, 2015 print issue under the headline: In between synods, bishops keep talking.